This is the fifth in a series of articles devoted to the recent Toronto International Film Festival (September 8-18). Part 1 was posted September 27, Part 2 on September 29, Part 3 on October 1 and Part 4 on October 5.

One of the values of an international film festival at its most interesting is the wide variety of locales and historical settings, the ability to watch fiction and documentary, adaptations and original works. There are obviously many large problems with filmmaking today, but human ingenuity and curiosity have not stopped functioning. 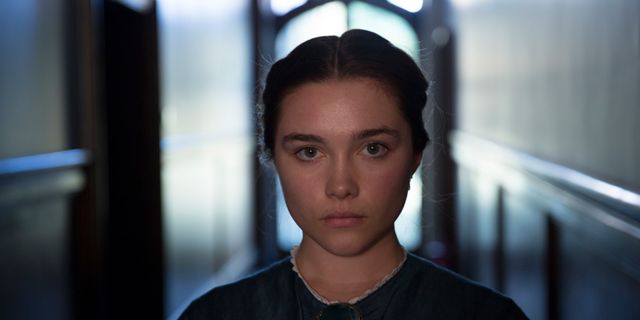 British theater director William Oldroyd has made his directorial film debut with an adaptation of the well-known novella by Russian writer Nikolai Leskov (1831-1895), Lady Macbeth of Mtsensk (the basis for Dmitri Shostakovich’s 1932 opera of the same title). It is the tale of a bored, suffocated young woman imprisoned in a wretched marriage, a theme treated in some of the greatest novels and plays of the mid- and late-nineteenth century: Madame Bovary, Anna Karenina, A Doll’s House (and Hedda Gabler), Effie Briest and others.

Tolstoy described Leskov as a “truthful writer”—which was high praise from him. Literary critic Walter Benjamin wrote a lengthy essay, The Story-Teller: Reflections on the Works of Nikolai Leskov (published in 1936), in which he commented, speaking of the Russian writer’s works, that there was nothing “that commends a story to memory more effectively than that chaste compactness which precludes psychological analysis.”

Indeed, Leskov’s Lady Macbeth of Mtsensk demonstrates the writer’s “chaste compactness,” a quality that Oldroyd largely carries over into his film version of Lady Macbeth. He has changed the location from a provincial estate in Tsarist Russia to the desolate countryside of Northumberland, in northeast England.

In 1865, teenager Katherine (Florence Pugh) is the new bride of the much older Alexander (Paul Hilton), a mine operator. She has been more or less purchased by Alexander’s father Boris (Christopher Fairbank) and like all acquisitions is expected to perform a function: providing Alexander with offspring.

Imprisoned in the sepulcher-like manor, Katherine is forbidden to walk the moors that are as wild as her temperament. And while Alexander is stern and brittle, his father Boris, the grasping colliery overlord, barely registers a pulse.

(Leskov: “Exceeding boredom in the merchant’s locked-up tower, with its high walls and watchdog running loose, had more than once filled the merchant’s young wife with pining, to the point of stupefaction. …”)

Katherine forms a strong attachment to her maid Anna (Naomi Ackie), a young woman of approximately the same age and perhaps even social background. Anna routinely gets dragged into Katherine’s schemes to alleviate her restlessness. 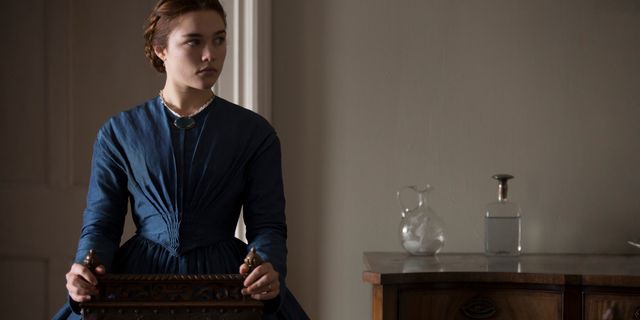 When Boris and Alexander go off to tend to a disaster at the mine, Katherine allows herself to be seduced by the insubordinate groom Sebastian (Cosmo Jarvis). Her fiery passions unleashed (“uncontrolled lust” is Benjamin’s phrase), she mandates her bewildered, suspicious staff to share in her independence: “No more bowing and not being who you deserve to be.” Katherine no longer feels constricted by the social mores of the time, and momentarily enters into a kind of utopian moral-emotional space, making her a nineteenth-century heroine like no other.

(Leskov: “Katerina Lvovna was now ready, for the sake of Sergei, to go through fire, through water, to prison, to the cross. He made her fall so in love with him that her devotion to him knew no measure. She was out of her mind with happiness; her blood boiled, and she could no longer listen to anything. … She suddenly unfolded the whole breadth of her awakened nature and became so resolute that there was no stopping her.”)

Brazen and remorseless, Katherine will not only “go through fire” and the rest for her love and freedom, but murderously defend them. All those, friend and foe alike, who stand in her way, face the ferocity of this “Lady Macbeth.” Given the nature of the society, her individual happiness requires and depends on horribly anti-social behavior. 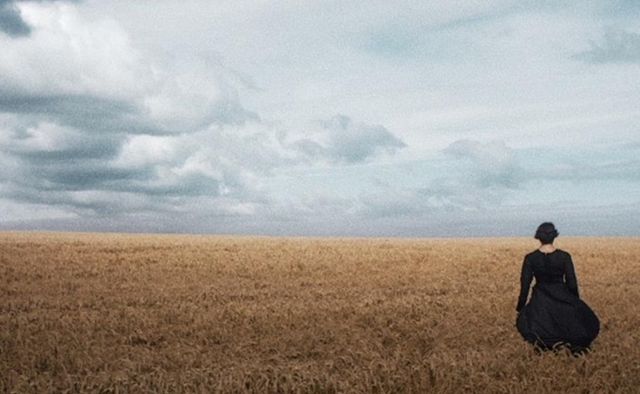 Director Oldroyd has done a fine job distilling the essence of Leskov’s novella. His Lady Macbeth is an intense, conscientious, well-constructed piece. Pugh stands out as the explosive protagonist capable of any emotion and deed. The supporting cast are all remarkable.

The cinematography eerily accentuates Katherine’s monastic prison, allowing her vibrant blue dress to serve as contrast. At the question-and-answer session after a public screening in Toronto, Oldroyd explained that the camera was static until Katherine “awakens.” Ackie (Anna), who is black, expressed pleasure at being able to work on a project that was “color-blind.”

Leskov was a remarkable writer. “What a good time you and I had, sitting together of a long autumn evening, sending people out of this world by a cruel death,” muses his Katerina in Lady Macbeth of Mtsensk. 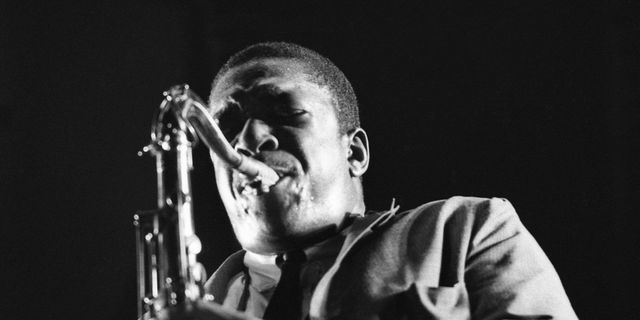 Chasing Trane: The John Coltrane Documentary, directed by John Scheinfeld (The U.S. vs. John Lennon), is a fascinating look at the life of John Coltrane (1926-1967), the legendary jazz musician and technically innovative composer.

Using Coltrane’s music as a soundtrack, Scheinfeld has assembled archival materials and moving recollections from such jazz greats as Wayne Shorter, Sonny Rollins and Reggie Workman. Trumpeter Wynton Marsalis and John Densmore, former drummer of the band “The Doors,” among others, provide additional commentary. Coltrane’s own words are spoken by actor Denzel Washington.

His stepchildren and children from his second marriage to jazz pianist and harpist Alice McLeod give a more personal view of the artist as husband and father, his troubles and his triumphs. Scheinfeld was also able to track down footage of Coltrane’s home life, offering another dimension to the portrait of the extraordinarily gifted and gentle man.

Unfortunately, Scheinfeld features former President Bill Clinton as one of the movie’s talking heads. (In fact, the filmmaker explained to an audience in Toronto that he pursued Clinton for 10 months before the latter agreed to appear in the documentary!) The film is also not aided by the empty musings of the self-promoting, “left” academic Cornel West.

If the Clinton and West sequences had been left on the cutting room floor, or had never been conceived of to begin with, the movie would have been much improved. Nonetheless, major portions of the documentary permit intimate encounters with Coltrane and point to the saxophonist’s work with the Miles Davis Quintet in 1958 as seminal to his musical evolution.

Coltrane’s own quartet, which he formed in 1960, is described in the film as one of the best groups in jazz history. It included pianist McCoy Tyner, drummer Elvin Jones and bassist Jimmy Garrison.

Unsurprisingly, Chasing Trane omits any serious reference to the civil rights movement and other earthshaking events without which Coltrane’s artistically driven urge to change the world cannot be fully appreciated or understood. 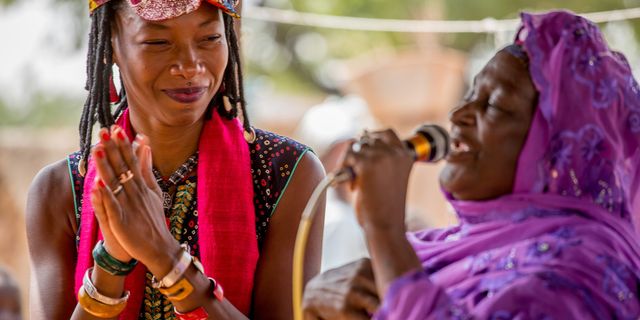 German director Lutz Gregor offers a glimpse of Mali’s musical scene in Mali Blues. Making the claim that the West African nation is the cradle of jazz and blues, the documentary follows the radiant Fatoumata Diawara—who fled the country to escape an arranged marriage—as she prepares for her first solo appearance in Mali at the Festival of the Niger in 2015. Mali’s deeply rooted musical traditions are threatened by Islamists in the country’s north, who have outlawed any form of musical expression.

One of the film’s most moving sequences occurs when Fatoumata visits her home village—very rural and very poor—and sings a song to the female members of the community about genital mutilation.

Director Gregor does not make much of the current political situation, in which Mali is increasingly a target for new imperialist intervention, or point the finger at the conditions and forces responsible for the emergence of Islamic fundamentalism in the north of the country. One cannot perhaps expect the musicians, who create some of the world’s most exquisite music, to speak knowingly about complex geopolitics. But the filmmakers have a greater responsibility.

In 76, Nigerian filmmaker Izu Ojukwu sets a love story against the backdrop of the failed 1976 military coup. A military officer, Joseph Dewa (Ramsey Nouah), and his wife, Suzy (Rita Dominic), are expecting their first child. (Both Nouah and Dominic are Nigerian, or “Nollywood,” film stars.) Soldiers on Joseph’s base are planning to assassinate government head General Murtala Mohammed. The plotters underhandedly work to involve Joseph, who refuses to take part. In this, they are aided by members of Suzy’s family, who disapprove of her marriage for cultural reasons.

Mohammed, recently placed in power as the result of a previous coup, has allegedly exacerbated tensions between various ethnic groups and also supported the USSR-backed MPLA in Angola’s civil war. The rebels succeed in assassinating him, but their coup ultimately fails. Joseph is rounded up with the perpetrators.

Focused as it is on the relationship between Joseph and Suzy, the movie sheds little light on the February 13, 1976, assassination, which brought Olusegan Obasanjo to power. Its central character wants to remain neutral, which seems to be the stance of the filmmakers.

As the WSWS explained in a 1999 article, however, Obasanjo was “widely believed at the time to be the linked to the CIA.” Nigeria, one of the world’s largest oil producers, was and remains of special interest to the US. Obasanjo’s “work with the CIA-created African American Institute and the Africa Leadership Forum … could literally be used as textbook examples of Cold War era covert operations.” Ojukwu’s film is silent on all this. 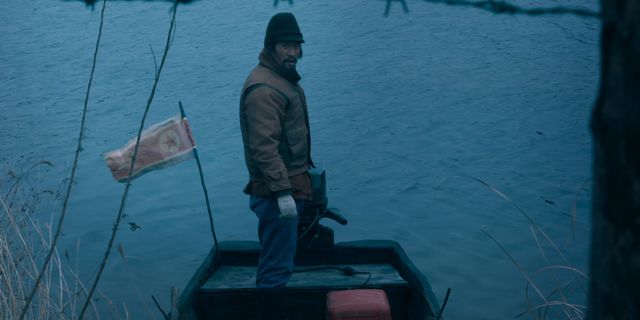 Veteran South Korean filmmaker Kim Ki-duk’s The Net deals with a poor North Korean fisherman who accidentally crosses into South Korean territory when his boat is disabled. Charged with spying, he is brutalized by the South Korean authorities. Horrific methods are employed to get him defect and leave a family he loves. (“If a fish gets caught in a net, it’s over. I’m caught in a net.”)

Eventually, he is sent back to North Korea, which promotes him as a hero, only to torture him in turn. The shots of both Koreas are revealing, and the lead character holds his own, but The Net essentially argues for an undifferentiated “plague on both your houses.”

Kim is an iconoclast and his willingness to expose his own country’s brutal police-state measures may take some courage, but a good deal more needs to be said. North Korea is an impoverished country ruled by a reactionary Stalinist regime, but South Korea is one of the spearheads of imperialist operations and militarism in the region.

ABACUS: Small Enough to Jail, the new film by Steve James (Hoop Dreams, Life Itself), chronicles the legal battles of a family-owned community bank in Manhattan’s Chinatown. Absurdly, Abacus was the only financial institution to be indicted in the aftermath of the 2008 subprime mortgage crisis. In 2012, Manhattan District Attorney Cyrus Vance, Jr. charged the bank and 19 of its employees with fraud in relation to hundreds of millions of dollars worth of mortgages that were sold by Abacus between 2005 and 2010.

The bank owners were eventually exonerated in 2015. Unlike the “too big to fail” financial institutions that were bailed out with trillions of dollars of taxpayer money, Abacus had to pay millions of dollars in legal fees to save itself.

While the story has interesting aspects, it is hard to fully sympathize with a family of bankers.

Turkish director Yesim Ustaoglu’s Clair Obscur is a feminist tale of two women, one secular and the other religious, and how they handle their respective brutish male partners. Images of soothing water and privileged people create an unhelpful and somewhat unreal picture of a country wracked by a profound social crisis and located at the center of the Middle Eastern maelstrom.

Ustaoglu seems to have retreated from her broader interests 15 years ago, in Journey to the Sun.