By our correspondents
16 February 2017

“Why is Jörg Baberowski suing the Bremen student body?” Under this title, the International Youth and Students for Social Equality (IYSSE) organised a meeting at Berlin’s Humboldt University to defend the freedom of expression of the Bremen Asta (Student Union). 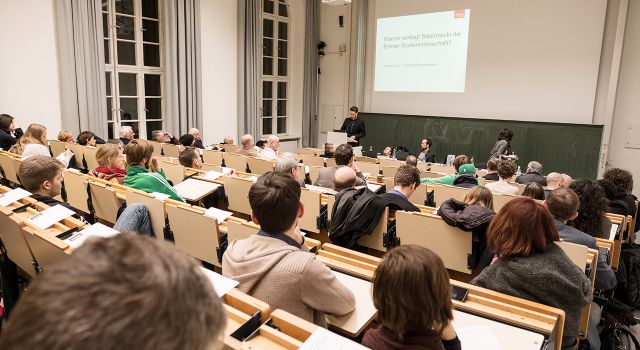 Meeting at the Humboldt University to support the Bremen Student Union

While the vast majority of the audience, comprising workers and students, sympathised with the Bremen Asta and supported the content of the criticism of Baberowski, Humboldt Professor Johannes Helmrath and a group of right-wing students came to defend the authoritarian actions of Baberowski.

Baberowski has sued the Bremen Asta, gaining a restraining order against it that prevents Asta representatives from quoting and commenting on certain of Baberowski’s statements. The Asta has filed an appeal that was heard on Wednesday before the Cologne State Court.

Two representatives of the Bremen Asta, Jan-Eric Hahn and Irina Kyburz, addressed the meeting. Their contributions immediately made clear how serious the adoption of a legal muzzle would be: “We are not permitted to address the details of the matter here,” said Irina, “and that is very annoying.” 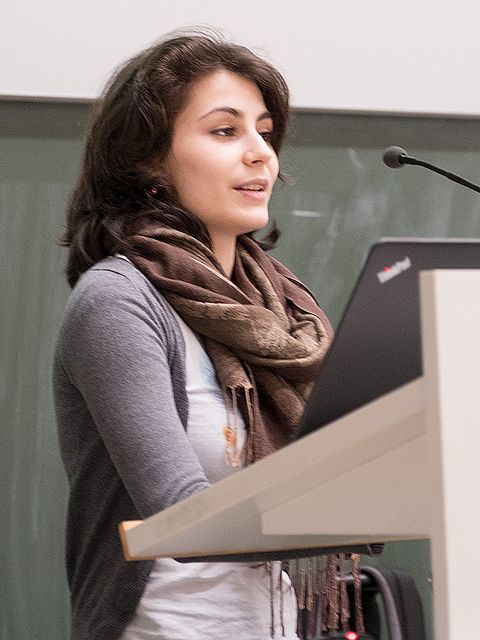 Irina from the Bremen Student Union

Such a measure hangs like a sword of Damocles over the students, IYSSE spokesman Sven Wurm said in his introduction. “If such an action were to succeed, then students would need to consider in future whether they possibly had enough money for a lawyer and a trial before they criticised the right-wing positions of their professors.”

Several professors have also expressed their solidarity in discussions, as Jan-Eric from Bremen Asta reported. However, they did not have the courage to take a position publicly, partly not to compromise the peace at their institutes, partly “as they admitted themselves, that they were too cowardly”. “That is already scary”, he added, “when something happens today that was common in the 1930s.”

One professor emeritus, the mathematician and computer pioneer Frieder Nake, has written a letter of support, and Irina read it to the meeting.

Wurm said that the growing protests against Baberowski’s attempt to muzzle critical students have prompted the right-wing professor to act increasingly aggressively. He himself had been insulted and threatened by Baberowski while he was handing out leaflets. Baberowski had photographed him and called him a “red-painted fascist” and “disgusting informer”, and threatened him with the police and a court case. At his lecture, Baberowski had then denounced the IYSSE as “criminals” and called on both the university administration and his fellow professors to take action against them and their meeting.

In his contribution, Christoph Vandrier, IYSSE spokesman in Germany, thoroughly refuted Baberowski’s assertion that his critics had libelled him by tearing quotes out of context for this purpose. 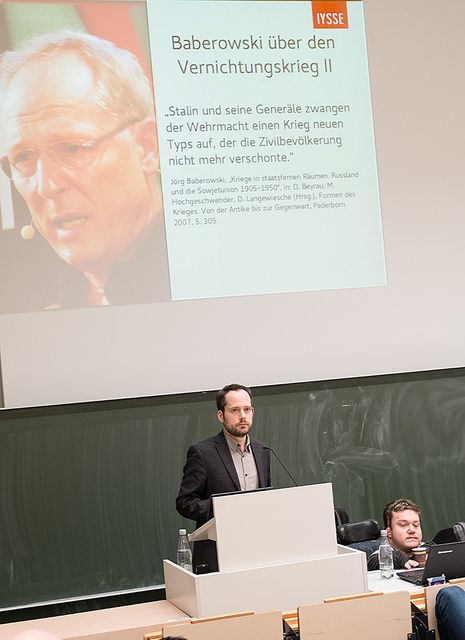 He cited several of Baberowski’s public statements—including what he said to the newsweekly Der Spiegel at the beginning of 2014: “Hitler was no psychopath, and he wasn’t vicious. He didn’t want people to talk about the extermination of the Jews at his table.”—presenting them in their full context, and with the sources. He played an original audio recording of one quote from a panel discussion at the German Historical Museum (DHM) entitled “Intervention Force Germany”.

In this, Baberowski had said, “And if one is not willing to take hostages, burn villages, hang people and spread fear and terror, as the terrorists do, if one is not prepared to do such things, then one can never win such a conflict and it is better to keep out altogether.”

Baberowski had later claimed he had said this to discourage military intervention. That this is not true can be shown by other quotes from the same talk at the DHM. Baberowski said there: One has “to be aware that this will cost a great deal of money and you have to send soldiers and weapons into a power vacuum. In order to separate the parties from each other in the first place. And above all, and this is the most important thing...you need the political will and political strategy and above all, you have to say that in order for this to work, we will go in. And it has to be worth it. That costs money. We have to send troops in.”

As Vandreier explained, Baberowski’s advocacy of military intervention is also perfectly in line with his theory of violence, which he had outlined in one of his books, Spaces of Violence (Räume der Gewalt).Vandreier said, “He is of the opinion that violence cannot be limited by civilisation, tolerance and social justice, but only and exclusively by violence. That is his reactionary fundamental thesis, about which I could present dozens more quotes.”

With this thesis, Baberowski not only justifies violence, but speaks out in favour of the maintenance of social inequality and the creation of a police state. He had, for example, already said that it would be better that money for social programmes was “poured in the Spree”, because the state was not responsible for social welfare but for “security.”

Vandreier demonstrated the way Baberowski agitates against refugees, using the example of an article that had appeared in the Basler Zeitung (owned by the right-wing Swiss populist Christoph Blocher). In this, the professor expresses himself in the following way: “Refugees are for the most part a burden, not an asset because they are not needed on the labour market. The welfare state will not survive this test.”

“Baberowski’s brazen outpourings can only be explained in the context of the current political developments,” Vandreier concluded. It is part of the shift to the right by the political establishment—with the rise of Donald Trump in the US and the turn in German foreign and security policy.

“This is not a personal vendetta against Baberowski,” Vandreier insisted. “The point is to prevent the universities being again transformed into right-wing think tanks and centres of militarism. The election of Trump has made nationalism, xenophobia and militarism, here in Europe too, a political means again.”

In the discussion, a fierce argument developed with the right-wingers who had come to the meeting at Baberowski’s bidding. While they said nothing about the content of the questions, they employed anti-communism, lies and insults in their attempts to whip up the audience against the IYSSE and to justify Baberowski’s actions against the Bremen Asta.

When Professor Helmrath, a colleague of Baberowski who teaches medieval history at Humboldt University, claimed the IYSSE were only pursuing Baberowski “with their hatred” because he had invited the historian Robert Service to present his “critical Trotsky biography,” IYSSE members took him to task.

In reality, Service had not written a “critical Trotsky biography” but a work that failed to meet the most elementary scholarly standards and therefore had been described as a “piece of hack work” (Betrand Patenaude) and “a diatribe” (Hermann Weber). Baberowski had reacted to the dispute at that time with authoritarian methods. In February 2014, he used a security guard to exclude critical professors and students from a public colloquium with Service.

Professor Helmrath, who had nothing to say about the substance of the criticisms of Baberowski, increasingly lost his composure and let rip with his anti-communism. In this, he revealed more about his own political opinions than he perhaps wanted to. He angrily claimed the students were acting as “stooges of an American Trotskyist old boys’ club, whose teachings no longer interested anyone, and which has therefore now specialised in Nazi hunting.”

The more Baberowski’s supporters were challenged to state their position on the content of the criticism, the more wretched their attacks became and the more openly their own right-wing views became apparent. A young man declared that Trotsky stood “for violence and blood,” and that of course the professor had the right to turn to the courts to take action against his critics.

Many of those present who were not from the Bremen Asta or were not IYSSE members also emphatically opposed the right-wingers.

One young participant pointed out that even an extremely well-intentioned interpretation of the quotes from the talk at the German Historical Museum would not change the content of the sentences which Baberowski had demonstrably said there: “I do not understand how you can say the quotes were taken out of context. Everyone can check this. No matter how benignly you embellish the context, the sentences are no less horrifying.”

The response of an elderly audience member, who had attended Baberoski’s lectures as a mature student, was very interesting. He said the quotes by Baberowski were “completely new—and I have to say, I am shocked.” He was very interested in the topic, wanted to research the questions himself and purchased the book “Scholarship or war propaganda?” after the meeting, which documents the struggle of the IYSSE against the return of German militarism at Germany’s universities.