By our correspondents
28 February 2017

The Socialist Equality Party (SEP) and International Youth and Students for Social Equality (IYSSE) held public meetings on “The political significance of Trump and the accelerated drive to war,” in Melbourne, Sydney and Brisbane, Australia’s three largest cities, on Sunday.

The SEP public meetings attracted an important cross section of university students, workers, professionals and retirees, who recognised that the Trump presidency represented a dangerous shift in American and world politics and sought a Marxist analysis of this development (see: “SEP meeting attendees speak on Trump and the threat of war”).

Addressing the Melbourne meeting, SEP national secretary James Cogan explained the political origins of the Trump administration and its reactionary agenda. Using a PowerPoint presentation, the speaker detailed the extreme right-wing and fascistic elements in the new regime, the escalating danger of war and Trump’s intensifying attacks on refugees and immigrants. 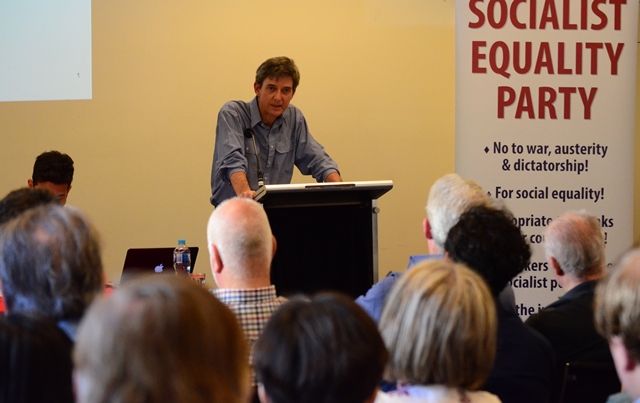 Cogan told the meeting that the bitter denunciations of US President Trump from the Democratic Party and sections of the corporate media for allegedly being soft on Russia were part of a ferocious conflict within the US state apparatus.

The question being fought out in this virtual civil war, he said, was which of the major powers—China or Russia—would be the first target of stepped-up US military pressure and aggression. Against the background of this reactionary conflict, US military strategists and right-wing think tanks were discussing and planning for nuclear war.

Cogan cited details from “Preserving the Balance: A US Eurasia Defense Strategy,” a recent report on US military strategy by the Center for Strategic and Budgetary Assessments.

“There is no mistaking the content of what is being discussed,” he said. “The US military establishment believes the use of nuclear weapons is not only practical, but necessary to win the wars of the future. It is prepared to risk the prospect of a nuclear exchange with Russia or China and thus the future of civilisation.

“To fight against what is happening, it is necessary, first of all, to understand what we are fighting against. It is necessary to understand Trump from the standpoint of the social class that he represents—the capitalist oligarchy.”

The Trump administration’s “America First” foreign policies and its domestic agenda, Cogan said, were a continuation of US military aggression and a social counter-revolution unleashed against the working class for more than 25 years.

The mass opposition towards the Trump administration was a powerful sign that there was no mass constituency for war and social reaction in the US, the speaker declared, but warned that the demonstrations would not change US policies.

Sections of America’s corporate elite that were opposed to Trump, along with various pseudo-left organisations, were attempting to corral this opposition into support for the Democratic Party and its equally reactionary nationalist and militarist agenda. The Democrats and their supporters had no fundamental differences with Trump, Cogan pointed out, because they defended the social and economic system that had produced him.

Cogan insisted that the corporate oligarchy could only be opposed by one social force, the working class, conscious of its revolutionary tasks and organised independently of the bourgeoisie and its political defenders. “The only way to combat the headlong drive of the US and other imperialist powers towards a new world war,” Cogan concluded, “is through the mobilisation of the working class on a revolutionary socialist and internationalist perspective.”

Beams began by pointing out that the Trump administration and its reactionary program could not be understood without placing it in its global and historical context.

“The Trump presidency is not an aberration, after which things might go back to ‘normal,’” he said, “but the sharpest and most explicit expression of a breakdown, not just of American capitalism and its political structures but of the world capitalist system as a whole.”

Beams explained that the “America First” program was threatening to overturn all the economic, political and military arrangements of the post-war period and fuelling dangerous responses by the imperialist rivals of the US.

The speaker said that German president Franz-Walter Steinmeier had told parliament that the world appeared to have “gone off the rails” and that Germany was now regarded by many as “an anchor of hope.” This was the theme of the German ruling elites in World War I and World War II, Beams said, and reflected in contemporary efforts by a layer of German academics to legitimise the crimes of the Nazi regime.

“The same processes are underway in Japan. The pursuit of an ‘America First’ agenda means Japan can no longer operate within the framework through which it has pursued its interests in the post-war period. It must set out on its own independent path which, as in the case of Germany, led directly in the past to a clash with the United States and war.”

Beams reviewed the political role played, during the US presidential campaign, by Bernie Sanders, who falsely presented himself as a socialist. Sanders sought to tap into the deep-seated hostility towards the political establishment in order to provide “a safety valve, and ensure that mass opposition was channelled back behind the Democratic Party.”

Beams asked: “Why are right-wing tendencies currently the main beneficiaries of the widespread anger and opposition to the establishment parties over rising poverty, unemployment and social inequality?”

The answer, he explained, lay with the policies and programs of the parties and organisations of what passed for the “left.” Over the past quarter century, these formations had promoted the same economic nationalist agenda as their so-called political rivals and had completely abandoned any program that even claimed to defend the interests of working people. 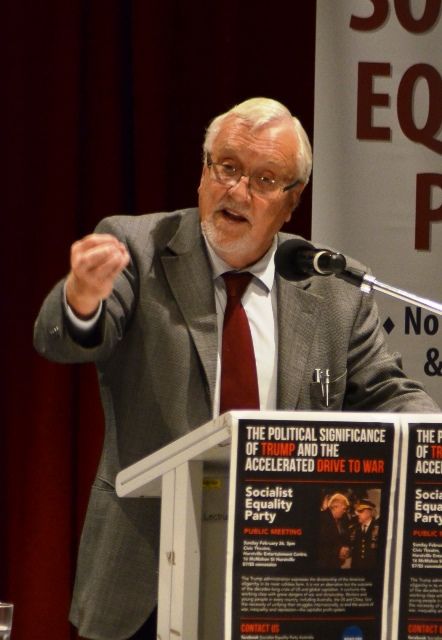 Beams emphasised that all forms of economic nationalism were a reactionary diversion and “a formula for chaos and destruction, authoritarian forms of rule and imperialist war ... Every economic activity is a product of the labour of a global working class, employed and dominated by the same transnational corporations and international banks and finance houses.

“The issue at hand is this: are these productive forces, created by the global working class, to be subordinated to the profit system and the inexorable drive to war arising from it, or are they to be utilised for the advancement of humanity as a whole?

“The historic challenge before the international working class is to undertake a globally unified struggle to overturn the reactionary capitalist nation-state and profit system through the international socialist revolution,” Beams said.

Following the reports at each meeting, a video was screened featuring World Socialist Web Site chairman David North introducing the International Committee of the Fourth International’s forthcoming lecture series on the 100th anniversary of the Russian Revolution.

North, and the speakers at the SEP public meetings, stressed the contemporary relevance of the Russian Revolution.

The video was followed by extended audience questions and discussion sessions, which covered a broad range of political issues. An indication of the seriousness of the response of the audiences was that over $5,000 was donated to the SEP’s special Party Building Fund.

In Sydney, audience members asked what workers should do in Australia; how to convince workers about the urgency of the political dangers posed by the Trump administration and the threat of war; and about the possible impeachment of Trump.

Nick Beams explained that the central task facing workers in Australia was no different to that of workers in every other country. “Australia is deeply enmeshed in US war preparations and geo-strategic manoeuvres; there is no national solution to war. Australian workers must conduct the most intransigent struggle for the unification of all workers against militarism and war and bring into the working class the great slogan of the Marxist movement—Workers of the World Unite!”

Responding to the question about changing the political consciousness of workers, Beams referred to Leon Trotsky, who explained that people reacted differently to political arguments, but their reaction to a “red hot poker” would be the same. In other words, huge political events, and changes in the objective situation, would produce mass struggles, but the decisive question was revolutionary leadership. The development of the revolutionary party and revolutionary consciousness in the working class was a process, and required patient political explanation and struggle in the working class, the speaker stressed.

In Melbourne there were several questions, including one about the relationship between the threat of war and the emergence of a revolutionary movement.

Cogan answered by emphasising the urgent need to develop an international anti-war perspective within the working class.

“We certainly do not have the aim of achieving socialism after thermo-nuclear war,” he explained. “We cannot wait on events. We have to fight to prevent war. Socialist revolution is required to prevent another imperialist war. This is the perspective that has to animate the working class in this country and internationally.”