In the early morning of Tuesday, June 27, a deadly fire engulfed a small house on Lahser Road, south of Seven Mile Road, in northwest Detroit. Twelve people were asleep there at the time, and three perished in the blaze.

Two three-year-old twins, Jayceon and Jayshawn Ford and their grandmother, Michelle Ford, in her late 40s, were killed. According to a gofundme page set up for the now homeless family, Michelle was able to get the twins’ older brother, Semaj Ford, to his uncle Kelvin. Kelvin was able to get him outside the home but is currently in the ICU trying to recover from second- and third-degree burns.

Four-year-old Samej was hospitalized in critical condition with burns to his head, neck and arms and is currently at Detroit Children’s Hospital of Michigan, with the family staying by his beside.

The blaze was the latest fatal house fire in Detroit. It occurred on the city’s northwest side, once the home of thousands of employed autoworkers and now dotted with abandoned homes, empty lots and closed schools.

In reports on all the local stations that day, Deputy Fire Marshall David Fornell was filmed at the site declaring that the fire was accidental. Investigators said the blaze started in the kitchen possibly from a faulty electrical stove.

Members of the family and several neighbors interviewed by the World Socialist Web Site said there were serious and chronic problems with the electrical service provided by DTE Energy, which is notorious for its failure to maintain power lines, to trim overhanging branches and update equipment for working-class neighborhoods.

The combination of aging, wood-frame buildings, overgrown vegetation and dilapidated power lines have turned house fires into a deadly epidemic. The family reported that virtually any weather event of wind or rain would knock out power for their house for days at a time.

Charles Sturkey, who rented the house under the Section 8 subsidized housing program less than a year ago, said, “Every time there was a wind storm the power went out. Just last month we were in the dark for almost two weeks. A tree trunk fell last week and it’s still behind the garage, and another limb fell and broke the upstairs window just yesterday.” 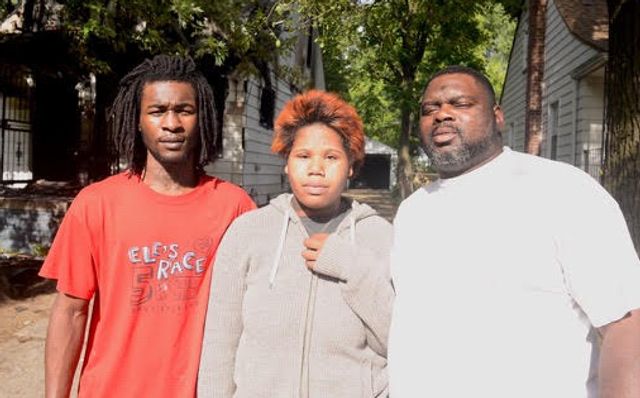 Fire inspectors had already wrapped and removed the charred remains of the electric kitchen stove. Charles commented, “I kept asking the landlord over and over again to do something about the stove. It always had a problem since we moved in.”

His daughter Jassmine was doubtful about the fire marshall’s explanation. “We had not used the stove for the past two days,” she said. “The small burners would smoke so much. We were using the microwave.”

She went on to describe the horror of that morning. “I grabbed my baby and my nephew. My other nephew, Semaj Anthony Lee Ford, ran through the fire. I really didn’t know he was hurt. But the skin on his hands and his face was gone. Now we don’t have anywhere to stay.

“I heard Michelle screaming upstairs,” she continued. “Then the fire came out of nowhere and I didn’t hear her screams anymore.

“My daddy was upstairs, but he couldn’t grab Michelle and the twins. We were out here five hours with no place to go. They didn’t give us any type of money.” The Red Cross provided a voucher of only $500.00 for four people.

Michelle Ford was Charles Sturkey’s companion of 14 years. She and her two grandchildren died in the fire. Other family members in the house at the time included Marc Sturkey, Devon Bennett, Jaelynn Sturkey, Calvin Martin Jr., Natalya Wallace and her son Patrick, and Jassmine’s son E’elizah Nichols.

Media reports of the tragedy are marked by a callous indifference to the desperate conditions that so many working-class families confront living in crowded, dilapidated fire traps for houses. Charles had moved here nine months ago because this home was larger than the one they had in downtown Detroit. 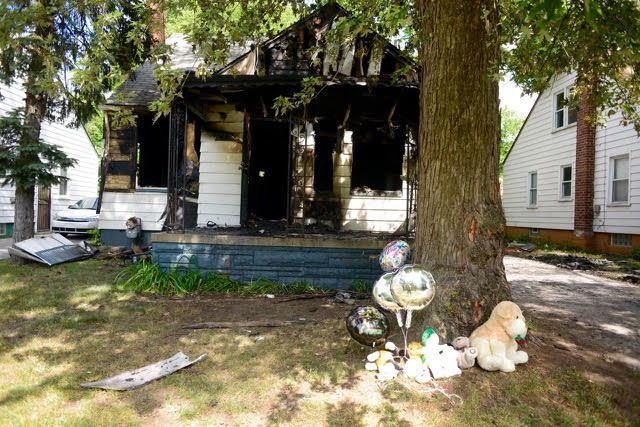 Memorial in front of burnt out house

Many Section 8 residents are also being evicted from downtown homes to make way for upscale apartments and lofts and a sports and entertainment district that will provide vast profits for the city’s corporate and financial elite.

Several neighbors gathered Tuesday evening to express their condolences and support for the family. “I don’t see how a whole city can go down the drain,” said Toya Colvin. “Who lives like this? You don’t see this anywhere else. I have seen sparks flying everywhere from power lines behind a house.

“They took money from education and parks to bring the Pistons [professional basketball team] downtown,” she continued. “I was out there with hand tools this afternoon cutting the grass in Clarita Park. The kids need a place to play. They say the city doesn’t have the money. But they gave the Ilitches free land and tax breaks to build a stadium.”

Tony Clark owns the house next door. We talked about the Grenfell Tower fire in London, England. “They talk a lot about gentrification here too. It is going to become a thing of classism.

“It is like when the Super Bowl came to Detroit. They got all the homeless people on Mack and Third and put them on a bus. They got them out of there.

“I tell people this all the time. They are taking everything away from us. They always send a financial manager to a poor area to take over the school district, or the whole city. I have yet to see a financial manager come to [the wealthy suburb of] Bloomfield.”

Behind the aging power lines and sparking transformers lies the naked drive for profit. DTE Energy was among the most successful companies on the stock market posting 2016 earnings of $868 million and accelerating growth of sales per share over four quarters with a gross profit margin of close to 18 percent in the most recently reported quarter. CEO Gerard M. Anderson took in total compensation of $11,079,250.

In September 2010, fires caused by downed DTE power lines destroyed 85 structures, including 71 homes in almost every part of the city. While the utility monopoly’s profits have grown, the deadly conditions for workers have not improved.