France: Masses stay away from November 16 protest against austerity

Ever since the union bureaucracies began organizing one-day protests and rolling strikes against Macron’s cuts, fewer and fewer workers have attended them. After the Stalinist General Confederation of Labor (CGT) union and its political allies folded up all protests last year against the labor law, faced with the Socialist Party (PS) government’s threats to ban the protest, union calls for mobilization have met with little enthusiasm among workers. Moreover, the unions avoided calling strikes in several industries where they have traditionally tried to call strike action.

This reflects the cynical policy of the unions and their petty-bourgeois political allies, like the Unsubmissive France (LFI) movement of Jean-Luc Mélenchon or the New Anti-capitalist Party (NPA). The unions publicly negotiated the decrees with Macron. They do not want to fight decrees that give them considerable power and financing—even though the goal is to negotiate new contracts that would slash the wages and benefits of their own members. They are thus strangling the deep opposition that exists to Macron, now widely despised as the “president of the rich.”

On Thursday, police counted 8,000 protesters in Paris, while the trade unions claimed 40,000. The NPA-linked Solidarity-Unity-Democracy union called teachers out to protest. There were some strikes in the regional train networks. In Marseille, police claimed 2,500 people protested, while the protest organizers counted 25,000. In Lyon, between 3,000 and 10,000 people marched; between 900 and 1,200 protested in Strasbourg. 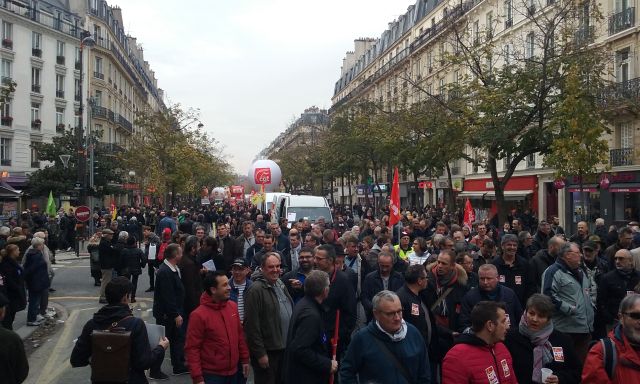 A section of Thrusday's demonstration in Paris

AFP reported 1,600 protesters in Rennes based on trade union figures. Some clashes broke out in Nantes near the main march, which gathered between 2,500 and 4,000 people. Security forces fired teargas at the protesters.

Some local or regional Workers Force (FO) officials joined the marches, but this was against the advice of the FO national leadership, which is hostile to opposition to Macron’s decrees. The French Democratic Labor Confederation (CFDT) similarly did not call strike action. The Stalinist French Communist Party (PCF) joined the movement, as did LFI and similar petty-bourgeois parties.

The limited participation in the latest protests underscores that mass opposition to Macron cannot be expressed though a movement controlled by the union bureaucracies. As Macron’s decrees prepare drastic attacks on workers’ basic social rights in France and across Europe, opposition can only take the form of an eruption of mass struggles outside the trade union framework. Such struggles would require a revolutionary and socialist perspective and leadership for a struggle for power against Macron and the European Union (EU).

WSWS reporters spoke to protesters in Paris. The demonstration was politically heterogeneous, with significant layers of youth and also members of the different political tendencies that for decades have orbited around the Socialist Party (PS) and are now stunned by its disintegration and the victory of Macron. A separation could be felt between youth looking for a way to fight Macron, and members of petty-bourgeois parties increasingly conscious that they do not have a perspective for a struggle against Macron and are separated by a political gulf from broader masses of workers.

Louis connected Macron’s labor decrees, his cuts to taxes on the wealthy and the APB reform, which he criticized for being elitist: “It’s a reform that’s supposed to be based on merit and simply introduce the idea of universities selecting their students. That would mean that students would no longer have a say in where they go to school. … We find that scandalous. They are putting into place a system where the best students remain the best, and the less good also stay that way. So it’s another elitist reform, as you would expect from Macron and like he did with the labor law.”

Louis raised that a new perspective and analysis of the far right was needed to oppose the rise of neo-fascism in Europe: “I think today more than ever, we need to take a step back to get a broader view of why the far right is rising. The youth are really opposed to it, however, because the far right does not benefit the youth.”

At the end of the interview, Louis also stressed his hostility towards the militarism of the different governments, in France and internationally: “Today it’s disastrous, we have Donald Trump who has a policy where he does whatever he wants. And Macron has similar politics.”

The WSWS also spoke to Julie, a member of the Young Communists (JC), the PCF youth, who declared she was protesting out of hostility to “neo-liberal policies that have been carried out for years and that only enrich the ruling class.”

Julie was extremely doubtful, however, of the possibility of organizing successful opposition to Macron. Asked about Jean-Luc Mélenchon’s candidacy in the presidential elections, she said she voted for Mélenchon because “I think he was the only candidate on the left who had a bit of hope of winning, a little chance, though I didn’t believe in it very much. Jean-Luc Mélenchon, one knows he will not carry out a great social revolution...”

Julie said she did not believe the union protests could force a retraction of Macron’s law, saying that she saw them principally as a symbolic gesture: “I think we don’t have a choice … we have to do it, even if it is only to feel all right about ourselves.”

Laeticia, a teacher and member of the Independent Workers Party (POI), said: “Many teachers were in the street a few years ago, but two years ago there was the reform of the junior high schools that was a catastrophe for us. They did not listen to us, and now they want to attack the high school students, and we still do not agree.” However, the only perspective she could see was, “We keep protesting until they actually listen to us.”