“There’s an attack on all public workers”

On Monday, 24,000 service workers on University of California (UC) campuses, members of the American Federation of State, County and Municipal Employees (AFSCME) Local 3299, hit the picket lines for the first day of a three-day strike.

Contract negotiations between the UC and AFSCME have stalled for the past year. After the UC offered a paltry 3 percent annual wage increase, 97 percent of the union’s membership voted in favor of a strike. The union has called for a 6 percent annual wage increase and has publicly opposed UC’s goal of delaying the retirement age by five years, outsourcing jobs, and raising healthcare premiums. 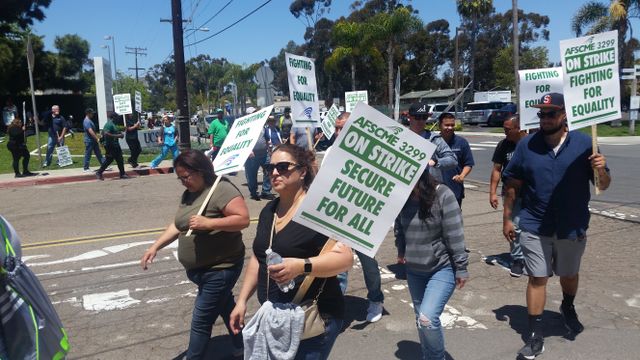 On Tuesday and Wednesday, 18,000 nurses, who are members of the California Nurses Association (CNA), and 15,000 healthcare administrators, covered by the University Professional and Technical Employees (UPTE) union, will join in a sympathy strike.

Like the wave of teachers’ rebellions across the US, the impetus of the strike has come from below, not from the unions, which are limiting the strike to three days and want to prevent UC workers from linking up with broader sections of workers who confront the same problems of low wages, deteriorating health care and retirement benefits, and skyrocketing housing and other living costs.

AFSCME and the CNA are allied with the Democratic Party and Governor Jerry Brown, who has overseen the attack on public sector workers. The governor appoints the majority of the UC Board of Regents, the university’s management.

Brittany, a custodian at University California-San Diego (UCSD), told the WSWS, “They’re trying to raise our benefits. The cost of living is already expensive. If you look at where all the UC campuses are it’s very expensive. I’ve got a family of four and I have to pay more and more for medical insurance. It costs $75 to see the emergency room. I hope we get our pensions, because I don’t know if we’re going to have them when I retire.” 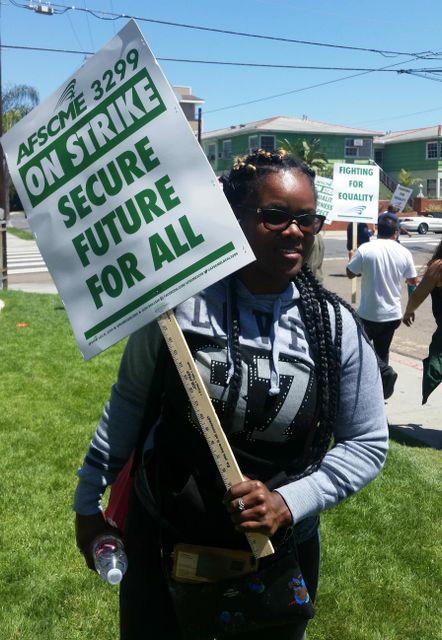 Many university workers talked about the difficulty making ends meet in California, which has one of the highest poverty rates in the country. When cost of living is taken into account, particularly the soaring housing costs, just over 20 percent of Californians are in poverty.

Renee, a medical assistant at UCSD, told our reporter about the cost of living in San Diego, saying, “Me and my husband are trying to purchase a house in San Diego, but it’s so hard and being a mother of two, having two jobs, and my husband still works. The cheapest house in East San Diego is $400,000 with a $60,000 down-payment.”

Workers expressed an overwhelming connection to other workers across the country. Tim, a worker at UC Berkeley for over 10 years, talked about the broader assault against the working class. “It’s definitely a class issue,” he said. “The whole rigged system is a class issue.”

When the WSWS asked Renee about her thoughts on the Arizona teachers’ strike, she said, “My sister-in-law is a teacher in Arizona and I was supporting her. They go to school and college for so long and they educate our children, but they have to work three jobs. Arizona may be cheaper, but they still don’t make enough money. My sister-in-law has two jobs. If that’s what is like in Arizona, imagine what it’s like here in San Diego. A lot of us are still paying student loans.” 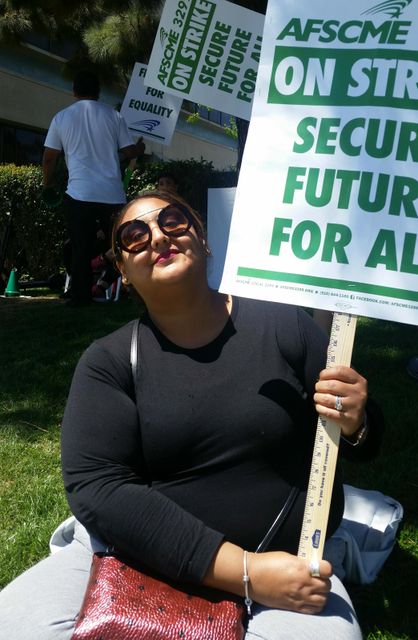 “The way the economy has gone you can’t survive on one paycheck,” said Blanca, who has been working at UC Berkeley for the past 20 years. “A lot of us work this job full-time and then another part-time. There’s an attack on all public workers.”

“When I began, the students used to graduate, get a job, and move on, but now you graduate with a big loan and there’s no jobs, no way to start a family.”

“This is absolutely a nationwide problem. The working class needs to unite,” she concluded.

Many workers pointed to chronic understaffing and the impact it had on services as one of the things that brought them out on strike.

A radiologist who asked to remain anonymous told the WSWS he has worked in his profession for 20 years, with seven of those years spent at UCSD. He said, “These guys [management] want to cut everything. We’re understaffed, and they know it. It’s hard to give the greatest patient care, it gets very stressful. For them to think we’re paid good is crazy. You can email your bosses saying, ‘I missed several lunches and breaks,’ and they’ll admit you’re right, but say, ‘We’re understaffed.’

“It’s like an assembly line in here, they work you to death. It’s hard to be attentive to each patient when they just want to get them in and out. Physically, trying to work like this is abusive. No matter how much you complain they won’t do a thing. Management will intimidate you. It’s like a slaughterhouse. They load 15 patients on you in the first hour. They’re either trauma or emergency room. They say they give great patient care, but it’s all a lie. There are too many patients, but they can’t accommodate because they won’t hire anymore.”