Conspiracy emerges to push Julian Assange into British and US hands

Julian Assange, the WikiLeaks founder who provided the world’s people with the truth about US war crimes in the Middle East and many of Washington’s coups and regime-change intrigues around the globe, is in escalating danger.

Moves are afoot to force Assange out of Ecuador’s London embassy, where he sought political asylum close to six years ago and has been forced to live as an effective prisoner. If he is taken into custody by British authorities, he faces being handed over to the US government, which has long sought to place him on trial on espionage charges that potentially carry the death sentence.

The British newspaper, the Guardian, originally published some of WikiLeaks’ devastating exposures in 2010. It then turned viciously against him, along with other international news outlets. Now, it has instigated a foul campaign, clearly acting in league with various intelligence agencies, to justify Ecuador reneging on Assange’s asylum.

The fresh offensive against Assange comes seven weeks after the Ecuadorian government, under pressure from the US, Britain and other powers, cut off Assange’s entire Internet and phone contact with the outside world, and blocked his friends and supporters from visiting him.

The Guardian has published unsubstantiated allegations that Assange “violated” the embassy’s communications system and “apparently” read “confidential diplomatic traffic.” In a tweet, WikiLeaks emphatically denied the accusation and pointed to its source, saying: “That’s an anonymous libel aligned with the current UK-US government onslaught against Mr Assange’s asylum—while he can’t respond.”

There is no doubt about the intent of the latest allegations. Guardian opinion writer James Ball was blunt. The WikiLeaks’ founder, Ball asserted, “should hold his hands up and leave the embassy.”

The Guardian’s lead article declared: “If he walks out of the embassy, he can expect arrest and could spend up to a year in prison for breaking his bail conditions. The US might then seek to extradite him. He would contest any attempt, and might win, but would face a long, uncomfortable spell behind bars while his case is decided.”

Earlier this year, Ecuador’s president, Lenín Moreno, who took office last May, stated that Assange was a costly “inherited problem” and a “hacker,” and made it clear that he viewed Assange as an obstacle to better relations with the US.

Ecuador’s government gave Assange political asylum in June 2012, when his legal appeals ran out against extradition to Sweden to answer questions over fabricated allegations of sexual assault, and likely rendition to the United States. Swedish authorities finally dropped their trumped-up investigation in May 2017, but Prime Minister Theresa May’s British government still refused to cancel an arrest warrant against him, nominally for skipping bail when he sought asylum.

Rafael Correa, Moreno’s predecessor, recently told journalists in Madrid that Assange’s “days were numbered” because Moreno, his former protégé, would “throw him out of the embassy at the first pressure from the United States.”

Since his election, Moreno has carried out a sharp turn to the right, with tax cuts for big business, cuts in social spending and attempts to reduce Ecuador’s dependence on loans and investment from China in favour of closer relations with US imperialism.

Ecuador’s government cut off Assange’s communications just one day after it welcomed a delegation from the US Southern Command (Southcom), the Pentagon’s arm in Latin America and the Caribbean, headed by General Joseph DiSalvo. Southcom said discussions were held to strengthen “security cooperation.”

There is no doubt that the US intelligence apparatus and political establishment are driving the conspiracy against Assange. Last year, WikiLeaks began publishing more incriminating files about the CIA’s global operations. US Attorney General Jeff Sessions said putting Assange on trial for espionage was a “priority.” CIA director Mike Pompeo, now secretary of state, declared that WikiLeaks was a “non-state hostile intelligence service.”

Last month, in a further bid to silence WikiLeaks, the US Democratic National Committee (DNC) launched a law suit, naming WikiLeaks and Assange as co-conspirators with Russia and the Trump campaign in a supposed criminal effort to steal the 2016 US presidential election.

Journalist and documentary film-maker John Pilger yesterday spoke out against Ecuador’s “betrayal” of Assange. “The vindictive pursuit of Assange [is happening] for one reason only: he told the truth,” Pilger told Sputnik International.

“He revealed through Chelsea Manning… the war crimes of the United States in Afghanistan and in Iraq; and of course, last year, revealing the machinations of the Democratic National Committee in trying to gerrymander the result [of the primary vote] in that country, which it successfully did.”

“Political refuge is something that is internationally recognised,” he said. “It’s not something you can then water down. Well, that’s what Moreno’s government has done. He’s negotiated with the British government over the head of Julian, at times not even involving him and his lawyers.”

Pilger pointed to the accommodation that Moreno was seeking with Washington, which has been aggressively moving against any government in Latin America regarded as an obstacle to US hegemony over the continent.

“It’s quite clear that this government has deferred to the United States because it cut off Julian’s contacts—all Internet, all phone, all visitors apart from food and lawyers on the day that US Southcom deputy commander General Joseph DiSalvo arrived in Quito, Ecuador to renegotiate a US base that Correa had shut down.”

The Guardian based its unverified accusations against Assange on “secret records” it had “seen,” together with Focus Ecuador, a right-wing website. It charged that Ecuador’s intelligence agency “bankrolled a multi-million-dollar spy operation” to “protect” Assange in the embassy. Over six years, this activity had cost $5 million.

A closer examination of the story, however, indicates that the surveillance was conducted primarily against Assange and WikiLeaks. A security firm watched Assange around the clock and installed CCTV cameras throughout the embassy.

“Operation Guest” logged every visitor that Assange had for six years, and spied on his every movement in the tiny embassy, monitoring his mood, habits and sleeping patterns, the Guardian reported. Agents recorded each visitor’s purpose of visit, their passport information and arrival and departure times.

“Every month, the security company sent a confidential list of Assange’s visitors to the Ecuadorian president,” the newspaper stated. “Sometimes, the company included stills from secret video footage of interesting guests, plus profiles and analysis.”

According to the Guardian, this possibly offered “clues as to who gave him the trove of hacked documents that helped to bring down Hillary Clinton in the 2016 election.” It ominously stated that such a “visitor” would “interest” US special counsel Robert Mueller, who heads an investigation into the Trump administration’s alleged links to Russia.

According to the newspaper, the FBI has already interviewed “at least one source close to Operation Guest,” indicating that Ecuador has handed over all its records to the US intelligence agencies. As a result, every person who has visited or communicated with Assange while he has been in the embassy is at risk of persecution and, potentially, frame-up charges of complicity in espionage or seeking to manipulate the 2016 US election.

The plot against Assange is bound up with an intensifying campaign by the American government and its allies to impose far-reaching Internet censorship and suppress freedom of speech and broader democratic rights. Unsubstantiated allegations of “fake news” and “Russian meddling” are being used by Google, Facebook and other conglomerates to restrict access to websites—including WikiLeaks and the World Socialist Web Site—that provide critical commentary and exposures of the capitalist class and its agencies.

We urge workers and young people everywhere to come to Assange’s defence and demand his immediate freedom.

The Socialist Equality Party (UK) and IYSSE are holding public meetings against War, Internet censorship and the persecution of Julian Assange, beginning May 17 in Glasgow, May 19 in Bradford, and May 20 in London, followed by meetings in Manchester, Sheffield, Oxford, Liverpool, Cambridge and Dublin, Ireland. We urge WSWS readers and supporters of democratic rights to attend.

The Socialist Equality Party in Australia is holding a meeting in Brisbane, Queensland, on May 20, following meetings in Sydney, Melbourne and Newcastle. 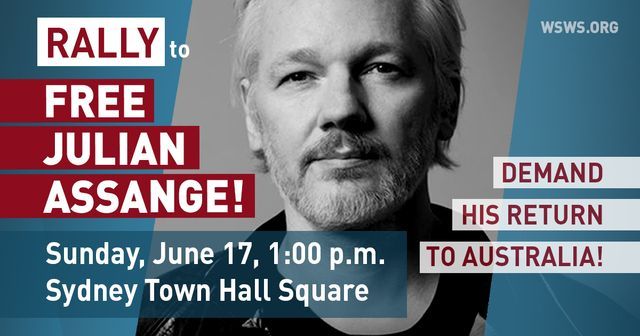