Dozens of people gathered outside Belmarsh prison in London Saturday to demand the release of WikiLeaks founder Julian Assange.

Assange was sent to Belmarsh after being seized by police from the Ecuadorian embassy in London. It is a Category A prison, previously described as the British version of Guantanamo Bay due to its use between 2001 and 2002 to detain several people indefinitely without charge or trial under the Anti-terrorism, Crime and Security Act 2001.

The protest was supported by the Socialist Equality Party (SEP) and WSWS. Among those protesting were supporters of the Julian Assange Defence Campaign (JADC), Ecuadorian and South American citizens, journalists, and other workers and youth. The JADC maintained a vigil outside the Ecuadorian embassy for the last seven years, after Assange was forced to take refuge there in 2012 in the face of plans hatched by the UK and Swedish governments to have him extradited to the United States.

Giving speeches were Emmy Butlin of the JADC, Robert Stevens, the UK editor of the World Socialist Web Site, Carolina Graterol, a foreign correspondent for BBC World Service (Spanish Section) and Juan Carlos Piedra, the director of the Ecuador Movement in the United Kingdom.

Chanting slogans in Assange’s defence, including “Belmarsh, Belmarsh, Freedom for Assange!,” “UK, USA—Hands off Assange” and “No US Extradition” protesters then marched to the front entrance of the prison. 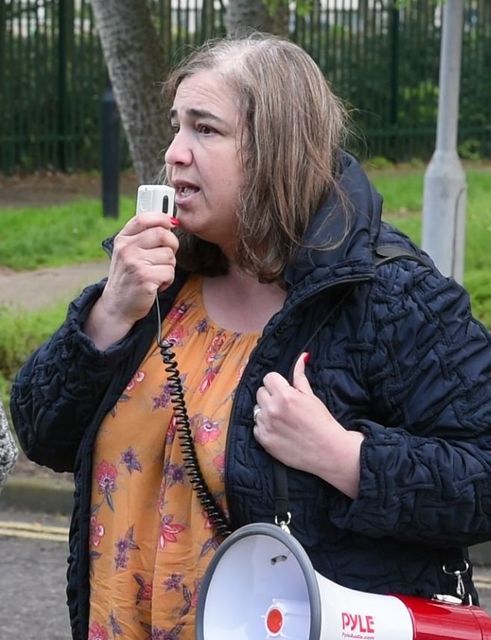 Emmy Butlin speaking at the protest

Butlin explained, “Wikileaks has published extremely important documents, authentic documents, opening our eyes as to how the world works, the world of politics, the world of diplomacy. And the backlash was an unrelenting persecution of the editor and founder of WikiLeaks, Julian Assange. We have seen him year after year being persecuted… and embroiled in a made-up legalistic process that restricts his freedom, restricts his ability to build his organisation.”

“Today… we are standing outside Belmarsh prison, where a Western publisher has been detained. Arbitrarily detained all these years and now this.

“We witnessed bewildered on Thursday how seven undercover UK police dragged Assange and carried him outside the Embassy and he resisted arrest. He shouted out ‘UK resist US extradition!’ This is the battle in front of us.” 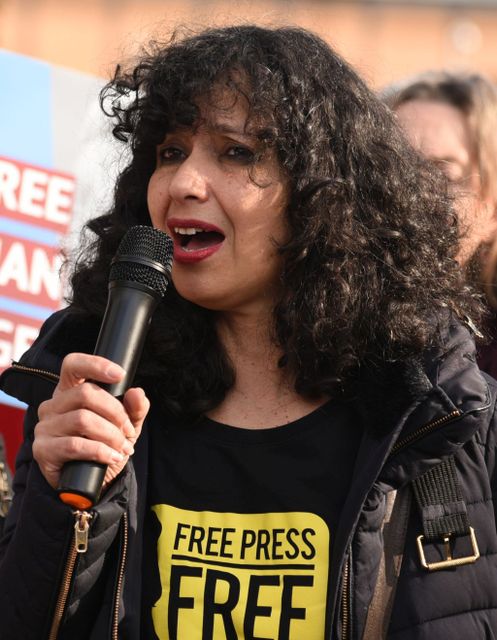 “He was dragged into Westminster Court and what happened there? Within 15 minutes a highly biased judge, Judge Snow, reached a verdict… Is this justice?... a British judge called him a narcissist. Is this justice?” Protesters answered “No, no!”

“There is one law for some and another law for others. The law that we decide to adhere to in order to live in a harmonious society is broken in front of our very eyes, in particular the law that protects human rights… The mask has fallen.”

Piedra said, “We feel ashamed of the government of Ecuador. We worked for a socialist government and we have been betrayed. Today this selling of principles to the United States that [Ecuadorian President Lenin Moreno] and his government has done shows his betrayal against us. They have broken Ecuadorian law and human rights law as well. It makes us ashamed. An important law has been broken, not just against Julian, but against all journalists in the world… You are in danger! That is why we want to denounce [Moreno] and give solidarity to Julian Assange. We want to tell Julian Assange, ‘You are not alone. We are going to stop extradition. Here we are, with you. The fight will continue!’” 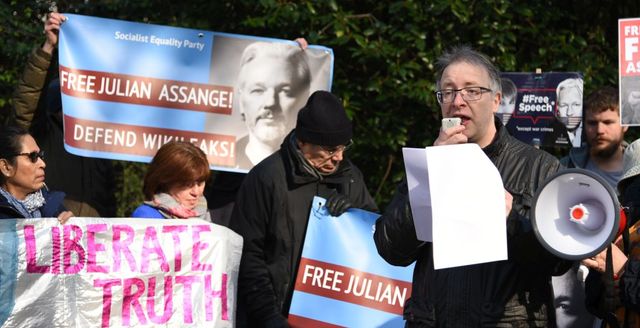 Robert Stevens speaking at the protest outside Belmarsh prison

Stevens began by noting that when UK Prime Minister Theresa May told parliament that Assange would now be subject “to the full force of UK law,” MPs from all sides of the House cheered her. At that stage, Labour opposition leader Jeremy Corbyn said nothing.

Later, “Home Secretary Sajid Javid made a statement on Assange’s arrest. There were few MPs listening, including no more than 12 on the opposition benches.

“For all the attention they gave to this outrageous assault on democratic rights and breach of all norms of due process, they might just as well have been debating regulations about dog collars.

“Corbyn was nowhere to be seen when Javid spoke. Shadow Home Secretary Diane Abbott did make a statement opposing Assange’s extradition to the US. Nobody supported her.

“Only later did Corbyn publish a single tweet stating that Assange should not be extradited to the United States.”

Labour would do nothing to win Assange’s freedom, with dozens of its MPs and peers now allied with The Independent Group of Blairites, and with the Tories to demand he be sent to Sweden to answer trumped up allegations of sexual assault.

“This is why we have to step up our fight for Julian’s release… He is a real journalist whose life and liberty is in imminent danger! We have to do everything to mobilise all supporters of free speech to prevent him from falling into the hands of the US government.

“Assange has no friends in the political establishment in Britain, only enemies. If a vote was held in parliament today for Assange’s extradition to the Sweden or the US, it would be easily passed, and passed with the backing of a large part of the Labour Party.

“He has no friends in the mainstream media—the Vichy journalists as John Pilger rightly describes them.

Stevens asked, “Just think about it. If Jeremy Corbyn had made defending Julian Assange an issue over all these years, do you think the police would have dared to turn up and drag Julian Assange, an ill man, out of the front door of the embassy in the centre of London, in broad daylight, and treat him like a criminal? Do you think that could have been done had a campaign been mobilised in Julian Assange’s defence?” In response protesters shouted, “no, no” and “gross injustice!”

“Throughout history the only social force that has defended democratic rights is the working class,” Stevens concluded. “Now is the time to act when these rights are under assault as never before. The fight to defend Julian Assange is your fight. Workers and youth must come forward and take an unequivocal stand in defence of Assange.”