30,000 march for public education in North and South Carolina

Tens of thousands of educators and their supporters marched in Raleigh, North Carolina and Columbia, South Carolina yesterday to protest low wages and abysmal public-school funding in the two states. North Carolina educators have seen a decline of 9.4 percent in real wages since 2009, and the state ranks 39th in the nation in per pupil funding. South Carolina ranks 38th in teacher pay and 31st in funding.

Organizers estimated that more than 20,000 marched in North Carolina and 10,000 in South Carolina. So many teachers, counselors, school bus drivers and other school support staff in North Carolina called off Wednesday that classes were cancelled for more than 850,000 of the state’s 1.5 million public school students.

Inspired by teachers in the neighboring state and organized on social media in less than two weeks, the South Carolina protests, one of the largest in the state capital in recent memory, forced seven school districts to cancel classes due to a lack of substitute teachers. The mass protests in the Carolinas are part of a continuing wave of teacher struggles that began last year with wildcat strikes in West Virginia and continued with walkouts in Los Angeles, Oakland, Sacramento, and Denver this year. More than a 100 charter school teachers walked out of four schools in Chicago yesterday, and teachers in the California capital of Sacramento are set to carry out a one-day strike on May 22.

US educators are fighting austerity and inequality along with their counterparts around the world. Thousands of striking teachers in Honduras have gone on a national strike along with doctors to oppose government measures that could lead to mass layoffs. Last week, contract teachers in the North African country of Morocco, who are fighting for permanent jobs, protested in the capital city of Rabat and were attacked with water cannon and batons. Over the last year, teacher strikes have spread across Africa, Asia, Europe and North America.

A sea of red shirts covered the capitol district in Raleigh on May Day. Educators carried homemade signs with their demands, including for improved pay, funding for teachers to complete master’s programs, increases in Medicaid funding to help low-income students and increased hiring and pay for support staff, including librarians, psychologists, social workers, counselors, nurses and other health professionals.

In South Carolina, teachers demanded a 10 percent raise, a halt to threats against teachers for making public policy statements and the hiring of more mental health counselors. 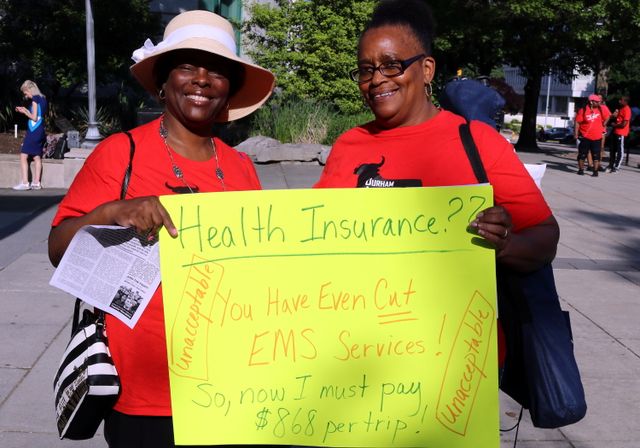 Laureen and Denise, a teacher and a custodian from nearby Durham, North Carolina

Shannon has been teaching elementary school for eleven years in Robeson County, one of the poorest areas in North Carolina, with a child poverty rate above 70 percent. The county seat of Lumberton flooded badly in both 2016 and 2018 when hurricanes overwhelmed poorly maintained infrastructure.

Describing the effect of widespread poverty on her students, Shannon said, “Many of our students come to school hungry, lacking sleep, lacking [school] supplies, and it’s not that they leave them at home. They literally do not have them.” She explained that teachers regularly pay out of their own pockets to buy classroom supplies to “make sure my classroom is funded and that my kids have the supplies they need.”

A teacher from the Raleigh area, Mr. Grayson, said he was marching because “we wanted to be a part of the increasing voice in general for collective bargaining and for rights of workers to have a voice in their legislature.” He acknowledged that if he was a “betting man,” he would say the legislature would continue to ignore teachers, but “there is strength in numbers and as many people as possible are needed for our voices to be heard.” 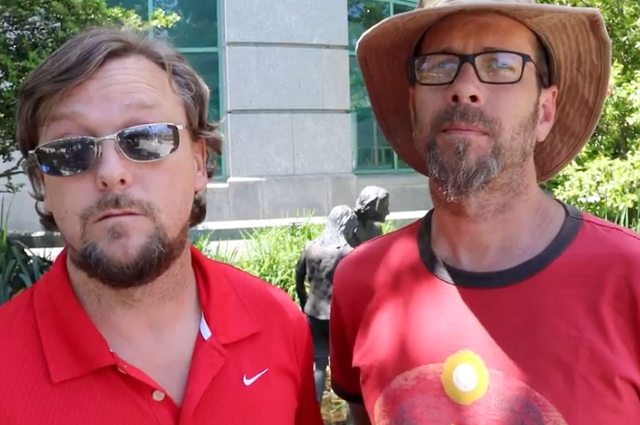 Asked what changes needed to happen, Grayson said, “We need increased spending within the school system, not necessarily per teacher, though that would be nice. But I think a major focus should simply be to provide more teachers, to be more equitable in how budgets are spent, more towards education and less toward militaristic means. We would benefit greatly if budgets were spent on minds instead of mines.”

Teachers have received widespread public support in North Carolina, with a poll from Public Policy Polling showing 71 percent in favor of the statewide protests.

The militant mood of the demonstrators contrasted sharply with the bankrupt policy advanced by the North Carolina Association of Educators, whose leaders like president Mark Jewell urged teachers to appeal to the Republicans and Democrats in the state legislature to hear their demands. Democratic Governor Roy Cooper was brought onto the stage to issue empty platitudes.

After state legislators ignored the demands of teachers in a mass rally of 20,000 last May, the NCAE called for teachers to campaign for the election of Democrats to end the Republican super-majority in the General Assembly. Cooper and the Democrats, like their counterparts across the country, have collaborated with the Republicans to starve public schools of funding while providing an endless flow of tax cuts to big business and the wealthy.

On the day before the march, the state legislature proposed a budget with meager pay raises—ranging from 10 percent for school principals, to 4.6 percent for teachers and just one percent for supports staff. These insulting pay raises, which will no doubt be funded through the implementation of regressive taxes or cuts to other vitally needed social program, will do little to make up for the loss of real income over the last decade or to stop the exodus of teachers from the state. 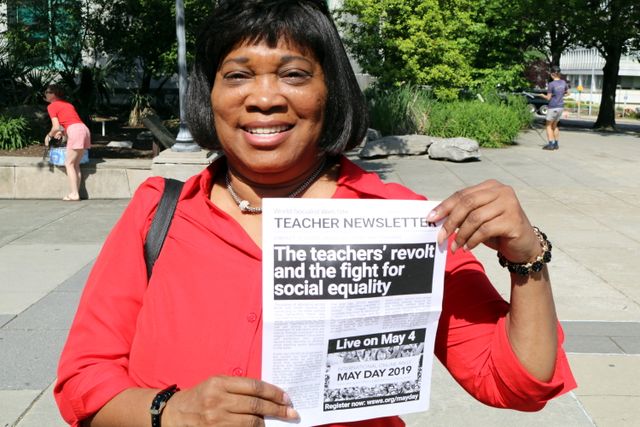 A WSWS Teacher Newsletter campaign team distributed 1,500 copies of the statement “The teachers’ revolt and the fight for social equality.” The statement called for educators to draw the lessons of the strikes of the last year, which were betrayed by the teacher unions, and build new organizations of struggle, independent of the unions and both big business parties.

“A fundamental change in society’s priorities will not be accomplished by appealing to the powers-that-be and their representatives in the Democratic and Republican parties to increase their taxes and create a more humane capitalism.

“The working class must build a powerful political movement against both corporate-controlled parties to fight for a workers’ government and the socialist reorganization of economic and political life. This will include the expropriation of the ill-gotten fortunes of the rich, a vast redistribution of the wealth, and an infusion of resources to raise the material and cultural level of the entire population.”

Teachers, school workers and their supporters warmly received the statement, and many purchased literature and subscribed to the WSWS Teacher Newsletter.