Millions in Australia “view Assange as a hero who is being attacked for revealing the truth.”

We are publishing the speech of Oscar Grenfell, a leading member of the Socialist Equality Party (Australia) and national convenor of the International Youth and Students for Social Equality, at the May 12 public meeting in London in defence of jailed WikiLeaks publisher Julian Assange and courageous whistleblower Chelsea Manning.

Grenfell is standing as a candidate for the SEP in the 2019 Australian federal election for the House of Representatives’ seat of Parramatta in Sydney. He spoke via internet connection from Sydney. 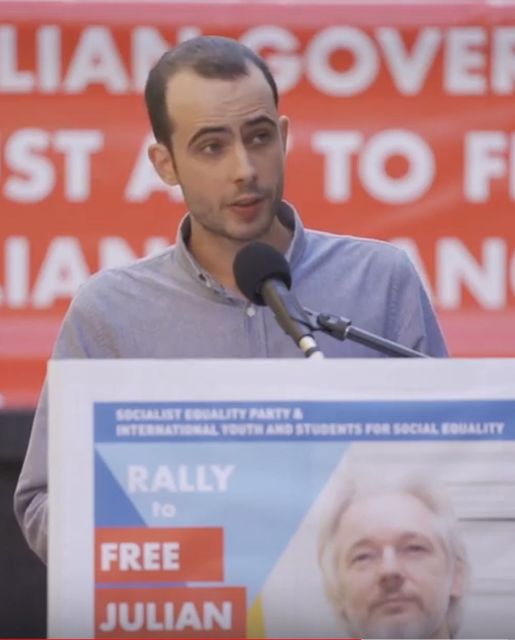 Oscar Grenfell speaking at the Free Assange Rally in Sydney on March 3, 2019

It’s a great privilege to speak at this meeting, which is viewed by everyone in the SEP Australia, and by WikiLeaks supporters here, as an important step forward in the global fight to prevent Julian Assange’s extradition to the US, and to secure his complete freedom.

Since April 11, discussion of the illegal termination of Assange’s political asylum and his brutal arrest has understandably focused on the role of the Ecuadorian, British and US governments in this historic crime.

I want to stress, however, that there is another government that bears central culpability for the persecution of Assange: that is the current Australian government, and all of its predecessors since 2010.

If any Australian government had fulfilled its undeniable legal obligations to protect Assange, an Australian citizen and journalist pursued for his exposure of war crimes, he would not be locked up in Belmarsh prison, facing the prospect of an extraordinary rendition to the US.

In a number of cases, Australian governments, acting as a result of mass pressure from below, have secured the release of Australian citizens from unjust and arbitrary detention abroad.

In the case of Julian Assange they have not. They have done the opposite, actively collaborating in the US-led vendetta against him.

In 2010, when senior US politicians were openly calling for Assange’s assassination, the Greens-backed Labor government of Julia Gillard publicly denounced him. Gillard declared that the “foundation stone” of WikiLeaks’ publications was “an illegal act,” an assertion she was never able to substantiate, and pledged to assist the attempts by the American intelligence agencies to destroy it.

Assange was compelled to seek asylum in the Ecuadorian embassy in 2012, under conditions of an unprecedented political and legal assault against him, because he knew that the Australian Labor government would throw him to the wolves.

This violation of Assange’s fundamental rights as an Australian citizen has been continued by every government since.

His arrest, on April 11, was met with pro forma statements by Liberal-National government ministers and opposition Labor MPs that they would provide him with unspecified consular assistance, committing them to nothing. Neither party condemned the brutal actions of the British police, or the attempts by the Trump administration to prosecute a journalist for carrying out his professional duty to the world’s population.

The real attitude of the entire political establishment was summed up by deputy Labor leader Tanya Plibersek. She reshared a Tweet, just hours after the arrest, which declared that Assange had worked as “the agent of a proto fascist state, Russia, to undermine democracy” and that his supporters were “cultists.” In other words, Labor is reading from the script of the CIA and that notorious warmonger and corrupt representative of Wall Street, Hillary Clinton.

Assange was arrested just hours after an Australian federal election, to be held on May 18, was called.

One might think that the prospect of an Australian journalist being sent to Guantanamo Bay or into the clutches of the CIA torturers, for publishing the truth, would have been a major focus in the election campaign.

However, official political discussion is not shaped by reason, objectivity and honesty, but by naked class interest. The persecution of Assange was mentioned only a handful of times following his arrest, then the issue has been buried by all of the parliamentary parties.

It is no exaggeration to state that outside of the protests and meetings held by our party and by politically unaffiliated WikiLeaks supporters, there have been no events to discuss the dire situation confronting Assange, much less to organise a fight in his defence.

It is not just the two major parties. The Greens broke years of official silence about Assange, releasing a statement the day after his arrest formally opposing the prospect of his extradition to the US. At the same time, Greens MPs lent credibility to the bogus Swedish allegations, obscuring the fact that Assange was never charged with a crime in that country and that they were a political frame-up.

Since then, for more than three weeks, Greens MPs have literally not mentioned Assange’s name in the countless television and radio interviews they have given. Instead, they have been busy calling for greater collaboration with Labor, and hailing the record of the Gillard government.

The Australian media has played a shameful role. They bestowed Assange with a Walkley Award, the highest honour in Australian journalism, in 2011. Since then they have slandered him, and trumpeted every lie of the intelligence agencies to discredit him.

Now, they have adapted themselves to the Trump administration. They have discovered that Assange, whom they hailed as a trailblazing publisher in 2011, is in fact not a journalist. Their argument boils down to the fact that he is not employed by multi-billion-dollar media conglomerates and that he publishes evidence of government crimes, while they suppress such evidence.

The pseudo-left organisations, such as Socialist Alternative, have similarly abandoned Assange. They largely stopped mentioning him, years ago, when they began supporting the US-led regime-change operations in Libya, Syria and the Ukraine, that WikiLeaks was exposing. These organisations, like their British counterparts, are not waging any campaign in Assange’s defence.

The universal line-up of the political establishment here expresses the same social processes that are at work in Britain and everywhere else. Australia is riven by class antagonisms, and the ruling elite is turning towards authoritarian and police-state measures to suppress social opposition.

All of the official parties, and the media, are committed to the US-military alliance and to American imperialism’s advanced preparations for war with China, which WikiLeaks has done much to expose.

The attitude towards Assange, among millions of workers, students and young people is the polar opposite. They view him as a hero, who is being ruthlessly attacked for revealing them the truth.

I will cite two examples. Last year, a worker in Brisbane initiated a petition, calling on the Australian government to secure Assange’s return to Australia, with a guarantee against extradition to the US. In early April, it had roughly 35,000 signatures. Within a week of Assange’s arrest, that number had grown to 110,000.

And late last month, WikiLeaks supporter Somerset Bean started a crowdfunding project, to plaster Australia with posters calling for Assange to be brought home. The initial target was $5,000. It was reached within hours. A subsequent target of $10,000 was also rapidly surpassed. Most of the donations are by ordinary people, chipping in small amounts of their money.

Over the past 18 months, the SEP in Australia has held a series of protests, demanding the Australian government intervene to secure Assange’s freedom. We have been very proud that they have been addressed not only by our national secretary James Cogan, but by world-renowned fighters for civil liberties, including John Pilger, Consortium News editor-in-chief Joe Lauria and Professor Stuart Rees.

These events have evoked a powerful response from workers, students and young people. We have stressed that we are not issuing a plaintive appeal to the Australian government, or to any of the official parties. Their participation in the attacks on Assange demonstrate that they are enemies of democratic rights and of the working class.

We have explained that an Australian government will only fulfil its obligations to Assange if it is forced to do so by a mass movement from below. Amid a resurgence of the class struggle, and immense support for the WikiLeaks founder, the objective basis for such a movement exists. It is our task, in collaboration with our comrades in the International Committee of the Fourth International and all supporters of democratic rights, to build it.