The following letter was received from Kristen, a student at Oxford University who attended the May 12 public meeting in London convened by the Socialist Equality Party, in defence of jailed WikiLeaks founder Julian Assange and courageous whistleblower Chelsea Manning.

Kristen sent her comments to Alice Summers from the International Youth and Students for Social Equality, responding to her remarks at the meeting. Alice’s speech dealt with fundamental political and theoretical issues that must be tackled in taking forward the defence of Assange and Manning in the universities, where identity politics and other forms of anti-Marxism are so prevalent. 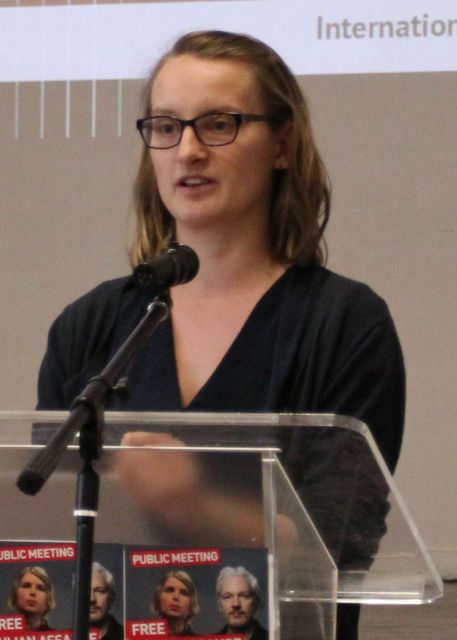 I attended the meeting on Sunday because Julian Assange is one of us. If Assange is extradited to America and tried under the Espionage Act, he will likely face the death penalty. But this is not simply a matter of the life or death of one man. Nothing less than the truth and freedom are at stake. It is dismaying to witness the silence of media. Many journalists serve as nothing more than a mouthpiece for governments, and it seems to be sheer cowardice that is preventing more from speaking out.

Today they have come for Assange, but tomorrow they will continue to find all those who seek the truth and to hold established powers to account. This is why the meeting held in London and the motion passed there is of such great importance. We must stand together and protect all whistle-blowers, journalists, and publishers who undertake huge personal risk for our right to know. If nothing else, the media must see it as their responsibility to make such uncovered information known to society. It is our responsibility to act as a people.

The condemnation of Assange by students is a worrying illustration of the power identity politics has come to hold over this generation. Many are unaware that Assange has made clear his willingness to face charges in Sweden, provided prosecutors can promise no further extradition to America will be carried out. To me it seems clear that this is evidently not about sexual assault, yet many have condemned him before he has even been found guilty.

The triumph of identity politics in our universities has rendered students incapable of serious analysis that goes behind the news curtain. In such an environment, it becomes increasingly difficult to speak against the opinions which appear to be held by a very loud majority. Such stifling of behaviour and thought allows the treatment of Assange to go unobstructed, privileging language and perception over very real and very dangerous realities. Identity politics is curtailing our freedom.

We must move beyond this constraining mindset, we must rid ourselves of the cage in which it keeps our thoughts and actions, and we must act together to secure the freedom of Assange. Identity politics has created a prison of the mind we languish in, while Julian rots in one which is far more real.

On the occasion of the Peterloo Massacre in 1819, Percy Bysshe Shelley wrote the Mask of Anarchy. Its last stanza serves for me as a message of courage, at a time when we may need it now more than ever:

Which in sleep had fallen on you,

Ye are many—they are few.”

We must unite together against the treatment of Julian Assange and for all those who place the freedom of man higher than their own. We must rid ourselves of the fear that keeps us caged. Above all, we must remember we have nothing to lose but our chains.