The Australian Federal Police (AFP) called a news conference on Thursday to justify its raids targeting journalists at two media organisations this week. 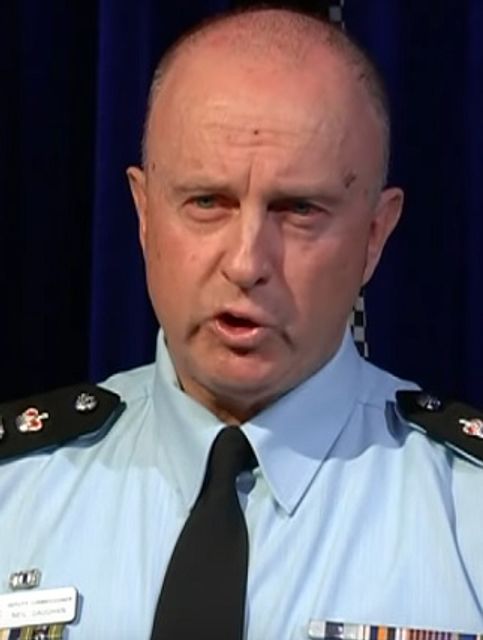 In an extraordinary admission, the AFP’s acting commissioner Neil Gaughan blurted out that the real reason for the raids was to protect the information that the Australian police and intelligence agencies receive from their “Five Eyes” counterparts. Five Eyes is a top-level network of intelligence agencies dominated by the US that also includes Britain, Australia, Canada and New Zealand.

“The Australian government, or particularly the Australian enforcement and intelligence communities, rely on secret and top-secret information from our international partners, particularly our Five Eyes partners,” the police chief said. “If we can’t be seen to protect our own internal information, [then] we are concerned that the information flow to us dries up.”

Citing government demands for investigations into leaks of secret information, Gaughan said the AFP received “numerous referrals to us [of leaks] and to be honest we get too many. But the premise of investigating these matters is to ensure the international community knows that we take the leaking of information, sensitive information, seriously.”

In other words, the AFP is under pressure not just from Canberra, but from Washington, to ensure that information, including about criminal actions of governments and its agencies, is kept from public view. This takes place amid the Trump administration’s mounting threats of war against Iran and Venezuela, as well as its escalating confrontation with China.

The AFP search warrants related to leaked documents exposing war crimes perpetrated by the Special Air Service (SAS) in Afghanistan and plans to legalise domestic mass surveillance by the Australian Signals Directorate (ASD), which are both central to Five Eyes operations.

Gaughan’s remarkable declaration went virtually unreported throughout the establishment media in Australia and internationally. His admission vindicates the analysis made by the WSWS on Thursday:

“[I]t is inconceivable that the Australian government would have instigated and pursued the investigation of the ABC and Murdoch media journalists without the agreement, if not urging, of Washington. Both the SAS and the ASD surveillance agency are closely integrated into all the wars and war preparations of the US.”

Gaughan’s statement also underscores the warnings made by the WSWS that the persecution of WikiLeaks founder Julian Assange for exposing the war crimes, mass spying and regime-change operations of Washington and its allies, including Australia, is setting a precedent for the criminalisation of journalism.

By specifically targeting journalists, as well as whistleblowers, the Australian government is following the lead of the Trump administration. The US has charged Assange, a journalist and publisher, with multiple counts under the Espionage Act, for which he faces life imprisonment.

At his press conference, Gaughan refused to rule out laying charges against News Corp journalist Annika Smethurst or ABC reporters Dan Oakes and Sam Clark for publishing alleged “national security” secrets. Such charges against journalists would be without precedent in Australia since World Wars I and II.

In a pointed warning, Gaughan said “no sector of the community should be immune” from police investigations into alleged law-breaking. Gaughan said the police are probing the “publication” of documents marked “secret” and “top secret,” placing journalists and publishers squarely under threat of prosecutions.

The AFP is investigating breaches of the Crimes Act, which criminalises unauthorised disclosures by public servants, and also contains offences that apply to journalists. Journalists, as well as alleged leakers, can be jailed for up to seven years. Dating back to World War I, the legislation outlaws “receiving” information that “prejudices the security or defence” of Australia.

But, asked what was the harm of revealing wrongdoing by Australian troops or plans to extend spying laws, Gaughan said the substance of the reports was “irrelevant.” The mere disclosure of protected information was a crime. He bluntly stated: “The issue of whether or not the public has the right to know is really not an issue that comes into our investigation process.”

The Crimes Act provisions were recently replaced by even more far-reaching measures embedded in the “foreign interference” legislation that the Liberal-National government pushed through parliament at Washington’s urging late last year, supported by the Labor Party. The maximum penalties were increased to 10 years’ imprisonment. However, the new laws could not be applied to the current cases, because the alleged leaks occurred in July 2017 and April 2018.

Gaughan tried to refute accusations that the AFP was acting at the government’s behest. He denied that the police had waited until after the May 18 federal election to execute warrants and claimed no contact had been made with the government since the AFP informed Home Affairs Minister Peter Dutton when the investigations first began.

These claims fly in the face of the facts. The government itself instigated both AFP investigations, and the Labor Party fully supported it in doing so. And Dutton and other government ministers immediately defended the raids. When Prime Minister Scott Morrison was asked at a press conference if he was bothered by police raiding journalists’ homes, he replied: “It never troubles me that our laws are being upheld.”

Above all, as Gaughan himself revealed, the raids were mounted to satisfy the Five Eyes powers, which means the US above all. Successive governments, both Liberal-National and Labor, have committed Australia to be a key partner in this network as part of its military alliance with the United States.

The police raids are part of a global crackdown on freedom of speech, including in the US and other countries, such as France, where governments are taking the Trump administration’s repressive lead.

This assault is targeted directly at the basic right of the working class to know the crimes, war plans and conspiracies of the capitalist ruling elites and the state apparatuses they control. It is being mounted amid growing struggles by workers around the world against soaring social inequality and declining living and working conditions.

The Australian police chief’s open threats highlight the urgency of the worldwide campaign being waged by the WSWS and the Socialist Equality Parties for the defence of Julian Assange and the jailed whistleblower Chelsea Manning. Their plight is a test case in the struggle against the lurch toward war and dictatorial forms of rule.