The UAW and Mack Truck are slated to pick up contract talks again today, as 3,600 striking workers enter their second week on the picket lines. 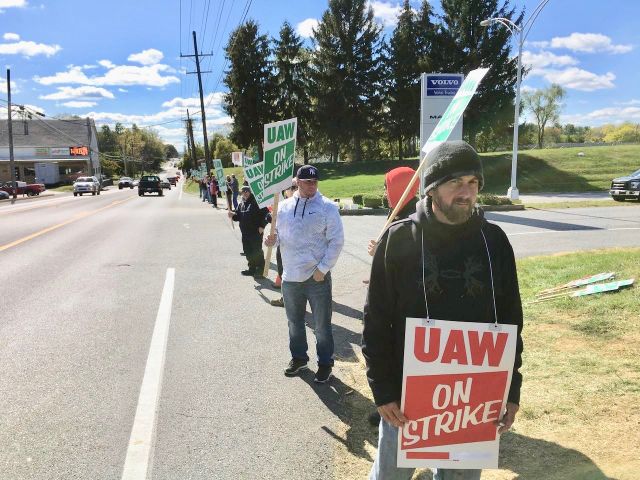 Mack Truck pickets at the Hagerstown plant in Maryland

At a Friday video press conference focused on the third quarter earnings, Martin Lundstedt, CEO of Mack Truck parent company Volvo, laid down the demands of the company to the striking Mack Truck workers.

Lundstedt declared that despite a nearly 11 percent revenue increase for its trucking division in recent months, Volvo was “not ready to compromise” on its hard-won share of the North American market.

“We are unique in the sense that we have 100% of our production for North America in the U.S. … We’re proud of that. But we also know that our competitors have the majority of their production in Mexico. So I mean it is important that we understand that a reasonable agreement is a must for us here,” the CEO said. In other words, American workers must accept lower wages and working conditions on par with more highly exploited workers in Latin America.

Like its counterparts at GM, Ford and Chrysler, Volvo is seeking to make workers foot the bill for an expected downturn in the industry. According to CNBC, “[s]lowing economic and manufacturing activity have contributed to a weakened freight outlook, made worse by uncertainty related to the U.S.-China trade war.” The article cites data provided by industry research firm ACT, noting “a 21 percent decline in net orders for Class 8 trucks, the heavy duty tractor-trailer semis that transport freight on U.S. highways.”

“They want to increase temp workers from 15 to 30 percent [of the workforce],” said a striking Mack-Volvo worker in Maryland to the Autoworkers Newsletter. “I’ve been at Volvo for 22 years. Volvo has made record profits over the past 5-6 years and they want to take something across the board from us,” said a worker to a team of reporters. “I want the temps to have a pathway to full wages. That is all I care about,” they added.

“We have had concession contracts... In the middle of the last contract, there was a memorandum of agreement in which we gave up 6 million dollars for Volvo to reinvest in the plant. That money came from the workers in order to keep work here,” they said.

“Even people working [at Mack Truck] thirty to forty years ago say it used to be better,” said a worker at a union-sponsored rally over the weekend. “They feel sorry for the new workers. They took pensions away and they keep taking and taking, every contract. This time we said we are not doing that.”

“Mack thought they were calling our bluff because there had been no strike for 35 years,” said a worker in Pennsylvania, while noting that United Parcel Service and Postal workers in the area had refused to cross their picket lines.

Last week, the company cut striking workers’ healthcare benefits; a tactic also used by General Motors as 48,000 autoworkers began walking off the job last month. The UAW has offered a minimal health coverage program which it required workers at Mack Truck-Volvo’s main Macungie Township plant in Pennsylvania to sign up for in person last Tuesday.

Workers must be warned that the UAW fully accepts the demands of the company. This is why the union kept workers on the job for more than a week after their contract expired on October 1. Its only concern is seeking a way to package and force it on its unwilling members.

Despite immense support from workers throughout the region and internationally, the UAW has continued to enforce a strict gag order on picketing Mack-Volvo workers.

Moreover, the UAW is conducting talks with Mack Truck/Volvo behind a veil of silence. On Friday, UAW treasury secretary Curry issued a public press statement containing no information, but filled with empty flattery to striking workers. “It is not easy to strike—on workers, on their families, and on their communities,” said Curry, who is currently the UAW’s second-in-command, pulling in a salary of nearly $150,000 per year.

He failed to note that the hardship imposed on the striking workers is greatly exacerbated due to the $275 weekly strike pay that the union has provided. Elsewhere, he said, “UAW members carry on their shoulders the profits of Mack and they are simply asking for dignity, fair pay and job protections.”

The Mack Truck-Volvo strike has coincided with a strike of 48,000 autoworkers at General Motors have been on strike against the profitable auto corporation since September 16, pitting one of the most militant sections of the American working class against one of its most powerful industrial corporations.

Last week, the UAW and GM released a Tentative Agreement which adopts all of the demands of the company. The UAW moved to wind down the strike at precisely the point when conditions have emerged for a joint struggle of autoworkers with broad sections of the American working class. In addition to the Mack Truck strike, roughly 20,000 Chicago teachers walked out on Thursday, continuing a wave of teachers strikes which began last year in West Virginia.

Moreover, American autoworkers have received powerful support from autoworkers in Mexico, some of whom have been victimized by GM for taking a stand in defense of the strike. While this has been blacked out by the UAW officialdom and the corporate media, autoworkers who have learned of it through the World Socialist Web Site have expressed a deep sense of solidarity. “I agree with everybody uniting,” a Mack Truck worker from Pennsylvania said. “If the Mexican workers support us, we should help them.”

The potential for an industry wide struggle is further demonstrated by Volvo’s decision this week to idle more than 3,000 truck workers at the corporation’s New River Valley plant in southwest Virginia, where a lack of truck parts resulting from the Mack Truck strike is causing shortages. The New River Valley plant is Volvo’s largest United States truck assembly facility.

Despite also being represented by the UAW, Volvo workers in Virginia have been placed on contracts which do not expire until 2021, so as to allow the union to further isolate the possibility of workers at multiple facilities conducting a joint struggle.

Striking Mack-Volvo workers must join forces with General Motors workers, as well as fight to expand their strikes to other corporations within the auto industry, including Ford and Fiat-Chrysler workers who are currently being kept on the job by the UAW.

Workers must create independent rank and file workplace committees at their jobs and communicate plans and strategy to other workers around the globe, utilizing the advances made in communications and technology which corporations currently seek to use against them in an effort to drive down labor costs.

Workers must draw up their own demands, including an end to the tier system of wages as well and temporary workers, line speedups, wage cuts, increased costs for health insurance and job security. This must be done independent of the union, as well as the political parties of big business whose main constituency, Wall Street, demands further exploitation.