Around 200 demonstrators assembled outside Westminster Magistrates Court in London on Monday to oppose the extradition of WikiLeaks’ founder Julian Assange to the United States on espionage charges carrying a 175-year prison sentence.

The procedural hearingwas only the third public appearance by Assange since his illegal seizure by police in April from his place of asylum at the Ecuadorian embassy in London. It was in preparation for a full extradition hearing in February 2020. 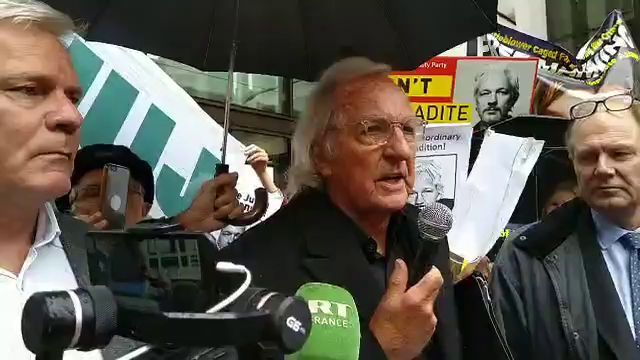 John Pilger speaking outside the court

The demonstration was called by the Julian Assange Defence Committee and was supported by the Socialist Equality Party (SEP). Protesters came from around Britain, joined by dozens of “Yellow Vest” campaigners from France.

Beginning at 9am, protestors loudly chanted “Free Julian Assange!” and “There’s only one decision—No extradition!” as other supporters queued up to attend the hearing. In a provocative move, the police, some in plain clothes, ordered the construction of a tiny fenced area into which they wanted to corral the demonstration. At one point an officer warned that the Tactical Support Group would be deployed if protesters didn’t move behind the barriers. All refused, but police decided not to risk a clash in front of many journalists and independent media representatives.

One of the first to emerge with news from inside the court, during a short break, was former London Mayor Ken Livingstone. Asked about the fate of Assange, Livingstone said: “He allowed people to discover the truth. We’ve been lied to all our lives, ever since the end of the Second World War. America has deceived us again and again, whether it was the invasion of Vietnam, killing 3.8 million Vietnamese. They are just defending American corporate interests. They should let him go.”

After over two hours, Emmy Butlin from the Julian Assange Defence Committee came out to explain what had been happening in court. Visibly upset, Emmy told the crowd: “Julian Assange’s condition is deteriorating daily, daily. What is he doing in there? Why are they torturing him? In front of our eyes, his health is failing him. Don’t let this injustice happen in front of our eyes. We will lose him.”

Emmy explained that a request for a three-month delay had been rejected by Judge Vanessa Baraitser, who also proposed that the February court hearing take place in Belmarsh Magistrates’ Court where there are just five seats in the public gallery. This news was met with cries of “Shame! Shame!”

Emmy urged, “Wikileaks has served the public with information, true information, and this judge wants to give us five seats. It’s unacceptable. Resist now!”

Emmy spoke to the WSWS, describing how Assange had looked “gaunt, like a ghost” in court. He had “kept his voice calm and explained that this was a whole state trying to crush him. He started going about his conditions of detainment and the judge just said, ‘The conditions of your detainment are not the subject of this court’.”

Explaining how a Spanish security firm had been spying on Assange inside the Ecuadorian Embassy on behalf of the CIA, Emmy said this had enabled them to obtain “records of his medical situation and conversations with his lawyers, and because of the court case into this going on in Spain, the defence wanted more time.”

Communication between Julian and his legal team “was seriously compromised, because he doesn’t have a laptop, he cannot communicate with them. They sent him things through the normal post. It takes forever, sometimes it doesn’t get delivered on time. So, there are real issues with delays in carrying out their work as defence lawyers.” But the judge had ruled out a delay, saying “Oh no, you’ve got plenty of time!” 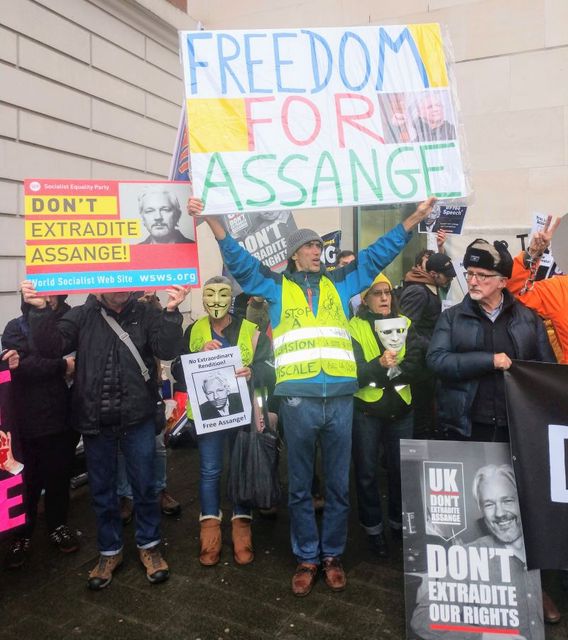 “Everybody here is here with right on their side—against a frame-up, a conspiracy and a criminal justice system that is working to silence whistle-blowers, opponents of war and colonialism, and criminality on an industrial scale which has claimed millions of lives.

“This is their court. Our court is the court of international public opinion! Everywhere there is a growing awareness of the gravity of the crime that is being perpetrated against Julian Assange. We want the working class to defend a man whose freedom is of paramount importance for every man, woman and child on this planet…. We will not accept this fraud of a trial on trumped up charges—175 years for espionage, for committing the crime of journalism!

“We are here to oppose it. And we represent millions. They represent nothing… A rotten, filthy corrupt system which is seeking to railroad an innocent man to jail.”

He pledged: “There will be no let-up until we have secured the freedom of Julian Assange, Chelsea Manning and all the heroic whistleblowers who have opposed the criminality directed against the world’s people.”

Hrafnsson said it had been “another disappointing day in court” since the judge had turned down the request for more time for the defence to prepare its case. “Julian said himself, a superpower has had 10 years to prepare the case and for the last six months, he has been sitting in Belmarsh prison without any access to legal documents—not even a computer …. How can that be fair? That is easily answered, it is not fair at all.”

Hrafnsson explained that the defence lawyers had argued that the case should be dismissed on the basis of a bilateral treaty between the United States and the United Kingdom, which “basically states that you cannot extradite anybody for a political offence and that is exactly what is being done here. This should have been dismissed a long time ago—this is journalism on trial here and it has to be fought!”

Pilger described how Julian Assange’s “voice was so weak we could barely hear it. He almost sounded like a changed man and that is what the years of detention and the months of incarceration in Belmarsh have done to him.”

Assange’s treatment in Belmarsh high security prison was “worse than that of a murderer. Murderers can fraternise. Julian is not allowed to.” The authorities were keeping him in virtual solitary confinement. “This is a deliberate action—and the source of this is a rogue state—a state that ignores its own laws and international laws.”

The protest was livestreamed on the Socialist Equality Party (UK) Facebook page, with viewers joining in from around the world.

Following the demonstration, Chris Marsden summed up the day’s experiences and the lessons to be drawn. He said: “This was clearly a continuation of the attempt to railroad Julian Assange to the United States, where he faces 175 years in prison on espionage charges… As far as the British ruling class and its judicial apparatus are concerned, there is only one verdict at the end of this kangaroo court trial and that is Julian Assange is shipped off to America to be silenced forever.”