Julian Assange’s hearing in London’s Westminster Magistrates Court on Monday was a despicable show trial. Any pretence that this was somehow a legal proceeding, aiming to enforce the law and respect the rights of the accused, has been abandoned.

Assange, who defied the most powerful governments by revealing to the world’s people war crimes and corruption, appeared gaunt and tormented by what a leading UN expert has described as torture.

Craig Murray, a former British diplomat and current human rights activist, wrote that he was “shocked by just how much weight my friend has lost, by the speed his hair has receded and by the appearance of premature and vastly accelerated ageing. He has a pronounced limp I have never seen before. Since his arrest he has lost over 15 kg in weight.” 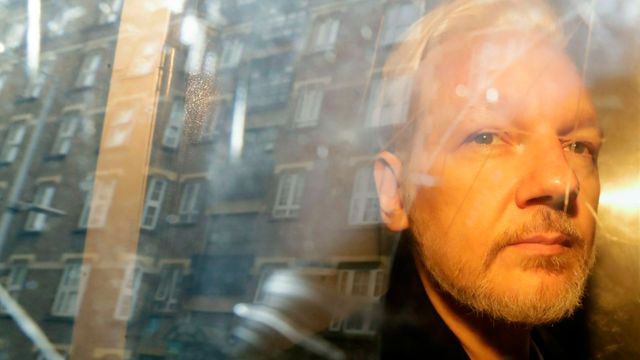 Murray stated that Assange’s “physical appearance was not as shocking as his mental deterioration. When asked to give his name and date of birth, he struggled visibly over several seconds to recall both.”

In a grave warning, Murray wrote: “Everybody in that court yesterday saw that one of the greatest journalists and most important dissidents of our times is being tortured to death by the state, before our eyes.”

With all the vindictiveness of the British ruling elite, presiding judge Vanessa Baraitser did not even attempt to conceal her hostility to Assange, his legal team and supporters.

Baraitser waved away arguments from Assange’s lawyers, which should have resulted in the immediate dismissal of proceedings for his extradition from Britain to the US, and his release from prison. These included the fact that existing treaties explicitly ban extradition from Britain to the US on political offences, and that the US Central Intelligence Agency (CIA) had conducted illegal spying against Assange while he was being protected by political asylum in Ecuador’s London embassy. The surveillance included audio and video recordings of Assange’s confidential meetings and the theft of his legal documents.

Far from being scrutinised by the court, CIA henchmen were effectively running the hearing, openly coaching the British prosecutors. As investigative-journalist John Pilger wrote, the court was “swarming with US officials, their visible instructions holding sway.”

Finally, Baraitser rejected a request for a three-month delay to Assange’s full extradition hearing in February. Struggling to speak, Assange stated: “This superpower had 10 years to prepare for this case… I can’t access any of my written work… They have an unfair advantage dealing with documents… This is not equitable what is happening here.”

Baraitser contemptuously declared that Assange could speak to his lawyers later if he did not understand the proceedings. Neither the judge, nor any other representative of the corrupt British judiciary, has explained why he is being held in virtual solitary confinement in the maximum-security Belmarsh Prison—despite the fact his custodial sentence on a bogus bail charge expired in September.

The miserable show trial was not covered seriously by any major corporate publication in the world. All of them have sought to cover-up what it revealed: that the nine-year US vendetta against Assange has been an illegal political persecution from the outset.

Every step of the way, the Guardian, the New York Times and a host of other corporate outlets have functioned as the adjuncts of the US government in its attempt to destroy the WikiLeaks’ founder.

They incessantly promoted the bogus Swedish investigation into alleged sexual misconduct against Assange, which was the fraudulent basis for his arrest by the British police in 2010 and which forced him to seek asylum in the Ecuadorian embassy in June 2012.

The well-heeled journalists claimed that Assange was “hiding from justice.” They covered up the fact that Assange was never charged with a crime in Sweden, and that one of the women involved said she had been “railroaded by the police” into making a complaint. The corporate journalists derided Assange’s insistence that the Swedish allegations were aimed at blackening his name and providing an alternate route for his extradition to the US over WikiLeaks’ exposures of American war crimes.

All of Assange’s warnings have come to pass. The entire pseudo-legal veneer of the campaign against him, including the Swedish frame-up, has been exposed as a fraud. Even before he has been extradited to the US, Assange is facing a lawless show-trial in Britain.

But the corporate publications have not reversed their position. The torrent of slander has continued, as they seek to keep the population in the dark about the dire implications of Assange’s persecution.

For their part, innumerable corrupt pseudo-left organisations, from the British Socialist Workers Party to the now defunct US International Socialist Organisation, endorsed the CIA-concocted lies that Assange had to answer the Swedish allegations. From Jacobin magazine in the US, to Socialist Alternative in Australia, they have remained silent as the attempted slow-motion assassination of Assange has proceeded this year. Jeremy Corbyn, the leader of the British Labour Party, who occasionally claims to be a socialist, has refused to defend the WikiLeaks’ founder.

The case is an abject lesson in the rotten character of every official institution: from the courts, to the media, to the political establishment, including its pseudo-left wing. All of them are hurtling towards authoritarianism, amid the deepest crisis of capitalism since the 1930s and a resurgence of the class struggle.

Assange will only be freed by a mass political movement of the working class, the constituency for the defence of democratic rights. Around the world, millions of workers are entering into explosive struggles, from the 48,000 US auto-workers on strike, to the hundreds of thousands protesting in Chile and Ecuador.

The World Socialist Web Site calls on workers to take up the fight for the immediate freedom of all class war prisoners, including Assange and Chelsea Manning—the courageous whistleblower incarcerated by the Trump administration for refusing to give false testimony against Assange.

Some 90 years ago, the socialist workers’ movement mounted a campaign in defence of Nicola Sacco and Bartolomeo Vanzetti, who were framed-up by the US government because of their political activism. That fight, which mobilised millions of workers internationally, played a defining role in world politics and has gone down in history as one of the great struggles against state persecution. The Assange case is to this generation what Sacco and Vanzetti was to the 1920s.

The pursuit of the WikiLeaks’ founder is aimed at creating a precedent for the suppression of all opposition to militarism, authoritarianism and government illegality. His defence must become the spearhead of a counter-offensive by the working class for all its social and democratic rights and against imperialist war.

There is no time to lose. Craig Murray’s warning, that “unless Julian is released shortly, he will be destroyed,” is an alarm that must be answered by all defenders of democratic rights, through an active campaign for Assange’s immediate freedom. In working class suburbs, in factories and at university campuses, all workers and youth must be apprised of Assange’s plight and mobilised for his freedom, including through meetings, campaigns and rallies.

Contact us today to take part in this crucial struggle.