Classes have been canceled for Tuesday, as the strike by 25,000 Chicago teachers enters its ninth school day. Moves by the trade union bureaucracy, working with the Democratic Party, to isolate the teachers and engineer a return to work on the city’s terms have been stepped up.

Service Employees International Union (SEIU) Local 73 announced that its 7,500 school support workers on strike with the teachers would vote today on a tentative contract that was announced only on Sunday night. The union is seeking to stampede the classroom aides, custodians and security staff in its bargaining unit back to work before they have a chance to study the new contract.

While SEIU Local 73 leaders say the support workers will not return to work until the teachers settle, even if they ratify their own tentative agreement, the move to settle the support workers’ contract is designed to weaken the teachers and place added pressure on them to accept a sellout deal handed down by the Chicago Teachers Union (CTU). 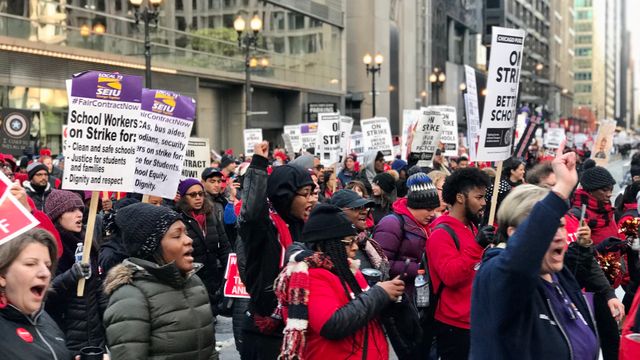 Chicago Public Schools (CPS) staff, many of whom make poverty wages as low as $30,000 a year, are to vote on a five-year retroactive contract. Few details of the agreement have been released, but news reports indicate the CPS has offered a paltry 16 percent raise over five years, an amount insufficient to keep pace with inflation. Staff may also see their health care costs go up 0.75 percent in the last two years of the contract.

On Monday, the Democratic governor of Illinois, multibillionaire JB Pritzker, intervened in the strike, declaring, “It has gone on too long.” The Pritzker family, which owns Hyatt hotels among other businesses, and whose personal wealth could fund Chicago’s public schools for years, comprise about half of Illinois’ 17 billionaires. But Democratic Mayor Lori Lightfoot insists that there is “no money” to significantly lower class sizes or expand the support staff.

Chicago Public Schools Chief Education Officer LaTanya McDade declared that the city was prepared to “make an investment” of nearly $500 million in the schools, the same amount the city offered before the strike began on October 17. McDade said, “The truth is we have made quite a bit of compromise at the table and we also need the union to make compromises.”

McDade also said the two sides were far apart on the cost of the proposals and teacher preparation time.

Over the weekend, the public discussion on the negotiations from both CPS and the CTU shifted from demands on staffing levels in classrooms to a dollar figure. CTU leaders claimed they were only $38 million away from an agreement, while CPS insisted the gap was $100 million.

The figure of $100 million represents less than 1.3 percent of the school district’s $7.7 billion operating budget. The $38 million being demanded by CTU President Jesse Sharkey and Vice President Stacy Davis Gates amounts to one half of one percent of the budget.

Late Monday, Sharkey and Gates held a press conference announcing that they had found $100 million for the schools in Mayor Lightfoot’s 2020 budget, unveiled last Wednesday. Davis Gates said, “It’s time to get an agreement,” and said the union had called its “big bargaining team” back to the negotiations.

Sharkey added, “If we get a credible offer, we’ll review it. We’re prepared to bring in our house of delegates if there’s something that shows seriousness… If they can find the resources and the will, we think we can get an agreement here.”

The sums in contention are utterly inadequate to address the crisis conditions in the school system, which has been starved of funds for decades, even as successive Democratic city administrations have expanded privately run charter schools and siphoned tax dollars away from CPS and other social services to provide tax breaks, incentives and loopholes for large corporations. The biggest single item in the mayor’s new budget is $703 million in principal and interest to Wall Street bondholders.

Striking staff workers in SEIU Local 73 told the WSWS they were concerned about the agreement’s health care provisions and the manner in which CPS and the union are moving to ram the deal through. School workers explained that the SEIU will gather them together and read the contract out loud, after which it will demand that the workers take an immediate vote.

The way forward in the Chicago teachers strike: The defense of public education and the fight for socialism
[26 October 2019]