Meetings were held over the weekend in Brisbane, Sydney and Alice Springs in Australia, and in Wellington, New Zealand, as part of the international campaign in defence of persecuted WikiLeaks publisher Julian Assange and American whistleblower Chelsea Manning. At each of the meetings, a resolution was unanimously passed demanding their immediate and unconditional freedom.

Assange is incarcerated in harsh conditions in the maximum-security Belmarsh Prison in London, ahead of a trial beginning on February 25, to sanction his extradition from the United Kingdom to the United States to face multiple charges of espionage and a potential life sentence of 175 years.

Manning is imprisoned in Virginia, US, and being fined $1,000 per day, for refusing to testify before a grand jury empaneled by the Trump administration. The grand jury has indicted Assange—and potentially other editors and journalists—for WikiLeaks’ role in the 2010 publication of information leaked by Manning, which exposed US war crimes in Iraq and Afghanistan and imperialist diplomatic intrigues around the world.

The livestream video of the Sydney meeting

The main report to the events was delivered by leading members of the World Socialist Web Site editorial board. Peter Symonds, the WSWS national editor in Australia, spoke in Brisbane on November 23. The New Zealand meeting on November 24 was addressed by WSWS correspondent and SEG leader Tom Peters. The same day, Oscar Grenfell and Richard Phillips, both WSWS correspondents and SEP Australia national committee members, spoke in Sydney and Alice Springs respectively.

The previous weekend, Grenfell, who writes extensively on the cases of Assange and Manning for the WSWS, also spoke at a meeting in the Central Coast town of Toronto, to the north of Sydney.

The meeting in Alice Springs was the first held by the SEP in the central Australian city. A separate report on the significance of the event and the discussion that took place will be published in the coming days. 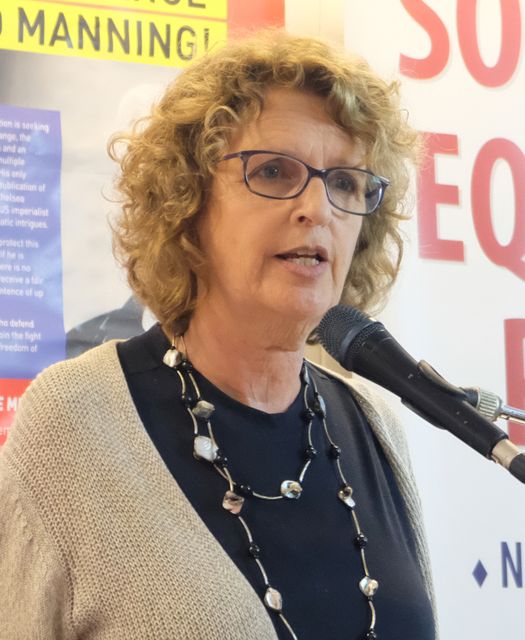 Chairing the meeting at Bankstown Library in Sydney, longstanding SEP leader Linda Tenenbaum opened the discussion by noting that the event was only taking place at the venue because “SEP supporters—workers, young people, professionals and intellectuals in Bankstown, throughout the country and internationally—insisted that it take place.”

She reviewed how, just days prior to the meeting, the SEP had been informed by Bankstown Council that the venue booking had been cancelled because of its “political” nature. The party responded with a letter to the Council, setting out clearly the democratic reasons why the cancellation should be immediately reversed, and appealing to its members and closest supporters to also write to the Council, voicing their concern that the cancellation was unjustified and discriminatory.

“The response,” Tenenbaum said, “was overwhelming. Scores of letters were sent and, within a few hours, we were informed by the Bankstown Council representative that the cancellation decision had been rescinded.” It testified to the depth of the support for the SEP’s campaign and for Assange and democratic rights.

Tenenbaum then briefly reviewed the relentless persecution of Assange and Manning. She noted: “The entire case has been a travesty of justice and a warning of the lengths to which the so-called justice systems of the so-called ‘democracies’ will go, to suppress public knowledge of their crimes.” She stressed to the audience that Assange’s “life now hangs in the balance,” due to the physical mistreatment and psychological torture inflicted upon him for nine years.

She noted that the meeting was taking place just days after Swedish prosecutors had abandoned—for the third time—their “preliminary investigation” into false allegations that Assange had committed sexual assault. Citing the WSWS, she reviewed how the “rape” investigation was used to embroil him in the legal system, force him to seek political asylum and suffer arbitrary detention in the Ecuadorian embassy.

“All of those who promoted this frame-up now stand exposed as accomplices of the American intelligence agencies, in their campaign to silence Assange and destroy WikiLeaks,” she said.

Following the opening remarks, Oscar Grenfell outlined the immense importance of the information that was contained in the four batches of leaks that WikiLeaks had published and for which Assange has been charged with espionage by the US government. These were the Iraq war logs, the Afghan war logs, the Guantanamo Bay files and tens of thousands of US diplomatic cables—dubbed “CableGate” by WikiLeaks. Due to Manning’s leaks and WikiLeaks, hundreds of millions of people were presented with the truth about both imperialist wars and the fraud of all the claims that the US and other powers were concerned with “democracy,” “human rights” or the “rule of law.”

Any conviction of Assange would have immense implications, Grenfell explained. It “would effectively overthrow the First Amendment of the American Constitution, which protects the right to free speech and freedom of the press… Globally, it would establish the ‘right’ of the US government to apply its domestic laws to the world’s population…. Any journalist, whistleblower or political activist who fell foul of the US government could be extradited.” 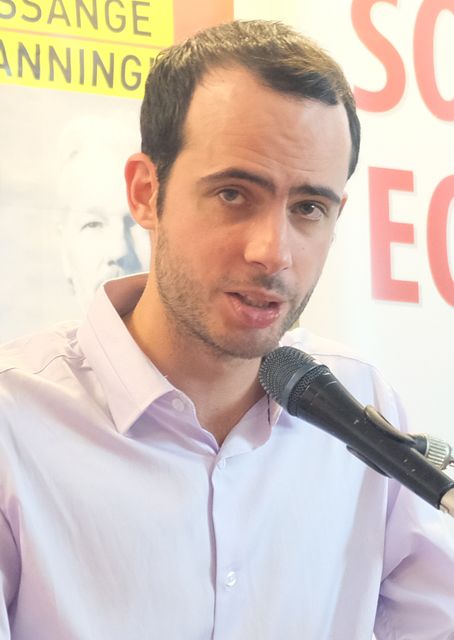 Grenfell continued: “The pursuit of Assange can only be understood as the sharpest expression of a massive assault on democratic rights, being spearheaded by the major imperialist powers amid the deepest crisis of capitalism since the 1930s.”

He stressed that behind the lurch toward police-state forms of rule in countries such as the US, the UK and Australia—of which the persecution of Assange is part—were two processes. Firstly, he reviewed the open turn by the ruling class internationally, and especially in the US, to militarism and preparations for war against its economic and strategic competitors. Secondly, Grenfell underscored the resurgence of the international working class, which was answering the decades-long attack on its living standards, and the grotesque levels of social inequality that now exist, with the greatest upsurge of class struggle in more than 40 years.

“The persecution of Assange, Grenfell insisted, was an attempt to intimidate this emerging movement and to create a precedent for the targeting of anyone who opposed war or the powers-that-be. “It is for that reason, he said, “that his defence must become the spearhead of the fight for all the social and democratic rights of the working class and against imperialist war.”

Grenfell urged workers and youth internationally to take practical steps to demand the freedom of Assange and Manning, including the formation of workplace committees to move resolutions and plan out definite actions, including demonstrations and strikes. To take forward the broader struggle to end social inequality and the danger of war, he concluded with an appeal for those in attendance, or watching the Facebook Livestream, to consider joining the SEP in Australia, or the sections and supporting groups of the International Committee of the Fourth international around the world.

Tenenbaum then opened up a discussion on the resolution that had been drafted for adoption by the meeting, to demand that the Australian government intervene to secure the release of Assange, an Australian citizen, whose rights it was obligated to defend. Members of the audience proposed amendments to the original text to strengthen its formulations.

In one important exchange, Tenenbaum clarified that a reference by an audience member to the “charges” of rape in Sweden were incorrect. Assange was never charged with any offence because, as demonstrated by the repeated abandonment of the investigation by Swedish prosecutors, he was innocent of the allegations and the entire case was a political frame-up. 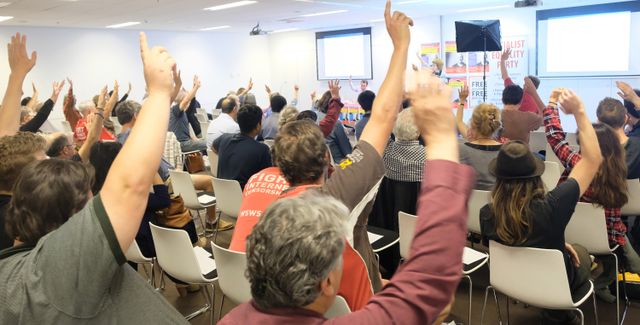 The Sydney meeting voting in favor of the resolution

The final, amended version of the resolution adopted at the Sydney meeting is available here and can be used as a template for similar resolutions by workplace committees and other organisations.

Speakers at the meetings also answered audience questions. These included how many people were needed to free Assange and why innocent people had been incarcerated in Guantanamo Bay.

The meeting in Wellington provoked a lively discussion about why the established parties, including the Greens, pseudo-left groups and almost every New Zealand journalist, have refused to defend Assange. The SEG’s Tom Peters highlighted the rightward shift in these upper middle-class layers over the last decade into supporters of imperialist war. He called for those present to help build the growing international movement of workers, young people and principled defenders of democratic rights. Only such a mass movement could force governments to defend Assange’s rights.

At the end of the meetings, donations of over $2,500 were made to support the political work of the SEP in Australia and the SEG in New Zealand. Attendees purchased several hundred dollars of socialist literature. Participants also gave interviews to WSWS correspondents on Assange, Manning and the campaign to win their freedom, and a selection of these can be read here.

The final SEP meeting in this series will be held in Melbourne on Sunday, December 15, at 2:30 p.m., at the Arts House, Meat Market 5 Blackwood Street, North Melbourne.