Les Misérables (“The Wretched”), directed and co-written by French-Malian filmmaker Ladj Ly, was screened at this year’s Toronto International Film Festival. It has now opened in several US cities and will have a wider release next month. The danger exists that the film will disappear with hardly anyone knowing that it was ever available.

Ly’s work, with its strengths and weaknesses, is an honest effort to confront the reality prevailing in the working class suburbs (banlieues) surrounding Paris. 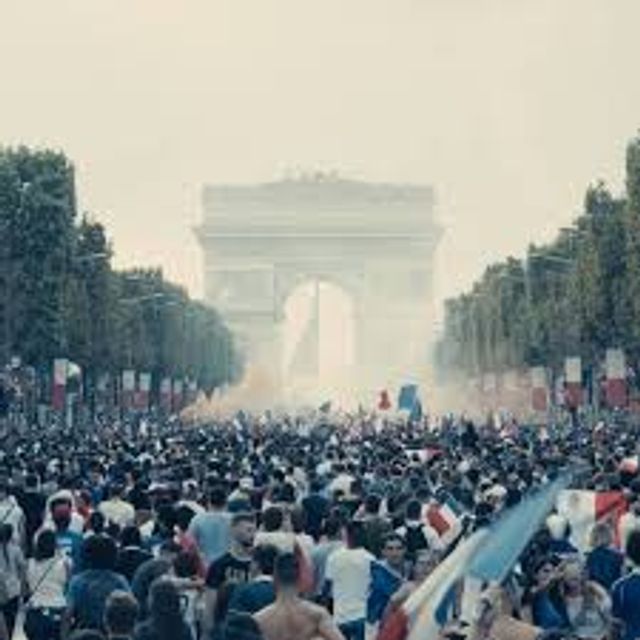 Those suburbs, with their run-down housing projects and generally wretched surroundings, are often home to the families of immigrants or descendants of immigrants from France’s former colonial empire in North and West Africa. The unemployment rate there for young people in particular is exceptionally high, 40 percent and above.

Major rioting occurred in these seething, impoverished neighborhoods and in many French cities and towns in late 2005 after two youth died while fleeing police in Clichy-sous-Bois in Paris’ northeastern suburbs.

Numerous French films dealing with these areas and conditions have appeared over the past quarter century. They have varied in tone—angry, resigned, despondent, cynical. However, the production and release of Les Misérables in the year of the “yellow vests” protests in France and an overall resurgence of the class struggle seems more than a coincidence. This is one of the first such works that depicts the oppressed youth organizing themselves to resist their conditions. The limitations of their semi-spontaneous revolt are undeniable and, to a certain extent, inevitable, but images of the tormented turning the tables on their tormentors must have an objective significance.

The association of Ly’s drama with Victor Hugo’s famed novel Les Misérables (1862) goes beyond the poverty-stricken circumstances of the characters represented in both works. Hugo located part of his sprawling book in Montfermeil, now a commune in the eastern suburbs of Paris and the site of significant protest and unrest in 2005. Ly grew up in the area and it is the setting for his film. The director has spent years bringing attention to the conditions there.

The film opens amid the huge, exuberant celebrations in the French capital following the victory of the country’s national team in the 2018 World Cup. A group of kids from Montfermeil participates along with everyone else in the madly flag-waving crowd, and later joins in the singing of La Marseillaise.As a character says later, “France is happy.” Ly’s images of a euphoric, supposedly unified nation, however, imply a different reality: that France is deeply polarized and that the youth have little in common with those manipulating or benefiting from the patriotic outburst. 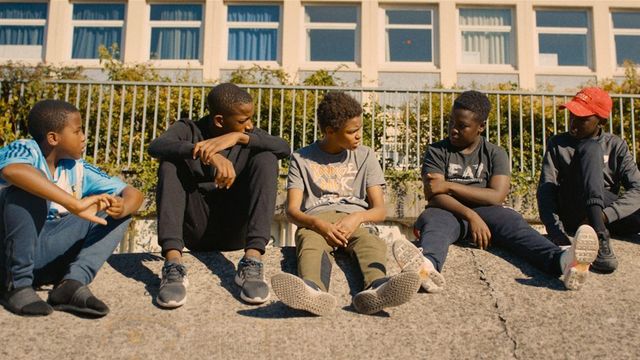 Ly organizes the drama proper along somewhat familiar lines. It is the first day on the job for Stéphane (Damien Bonnard), a policeman transferred to Paris from a small town who tries to conduct himself “by the book.” He is teamed up with plainclothes partners Chris (Alexis Manenti) and Gwada (Djebril Zonga), the son of African immigrants, who have long ago given in to cynicism and the dishing out of casual, arbitrary violence. They justify their foul behavior by referring to “the brutality of our world.”

Members of a special anti-crime unit, Chris and Gwada, with Stéphane in reluctant tow, spend the day harassing the local residents and youth in particular, checking in with informers, pursuing petty criminals and petty crime, inappropriately frisking teenage girls and generally throwing their weight around. They regard the residents with contempt, as so much human refuse, and are hated in return.

Meanwhile, one of the local kids, Issa (Issa Perica), steals a lion cub from a traveling circus. The circus owner and his clan storm the headquarters of the project’s self-appointed and thoroughly corrupt “mayor,” brandishing weapons and threatening to wreak havoc unless the valuable animal is returned. The three cops, in an effort to calm the situation, launch their own search.

Foolishly, Issa advertises his theft on social media and is eventually tracked down, although the young lion has escaped his custody by this point. When Issa’s angry friends protest his arrest, the policemen panic. Gwada ends up shooting the young boy in the face with his flash-ball (the same police weapon that caused “yellow vests” organizer Jérôme Rodrigues to lose an eye and a photographer taking photos of the protests to lose three fingers).

Buzz (Al-Hassan Ly), a neighborhood kid who flies a small drone, mostly to spy on girls, captures the incident on video. The cops frantically attempt to cover their tracks by getting hold of the footage, by any means necessary. At one point, “cowboy” Chris screams, “I am the law!” 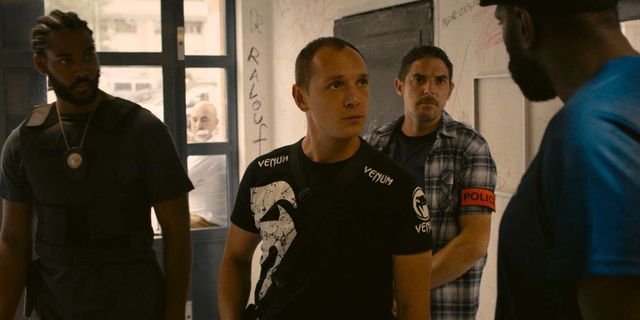 The three police in Les Misérables

By the end of the day, things appear to have settled down. The cops have the incriminating video in their hands. The lion cub has been restored. Issa has survived his painful and potentially fatal or debilitating injury. The sun sets on the grimy neighborhood, and the three cops return to theirs.

But the director, and the local kids, have a surprise in store. The latter prepare an ambush, not only of the police, but of the black “mayor” and the local drug lord … A pitched battle ensues.

Les Misérables is convincingly and effectively done. Ly knows the area, he knows the youth and their bleak lives. He understands the elementary, undeniable truth that when water is heated to a certain temperature, it boils.

The policeman’s-eye view raises certain questions. The director tends to see the police as merely “untrained” or “unprepared.” In fact, as an indispensable arm of the capitalist state, they are doing in Les Bosquets and elsewhere precisely what they are hired and mobilized to do—intimidate, repress, terrorize.

Ly deserves credit for his commitment and determination to social truth.

The film ends with the famous lines from Hugo’s Les Misérables: “There are no such things as bad plants or bad men. There are only bad cultivators.” 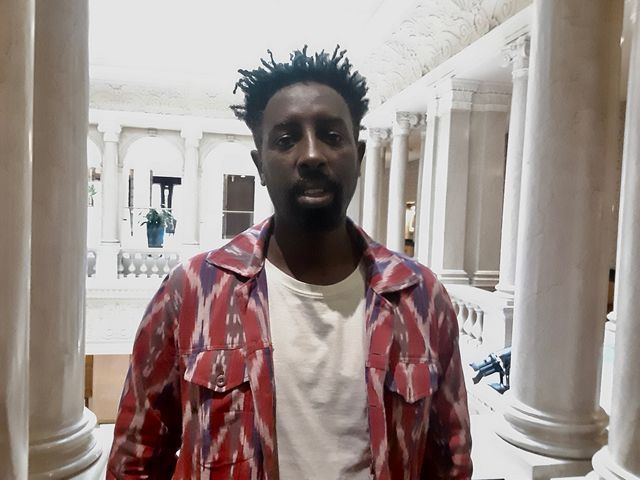 We spoke to the director in Toronto in September:

David Walsh: Can you explain why you were inspired to include the final section, a mini-revolt, in Les Misérables ? Do you see signs of organized opposition to oppression and poverty?

Ladj Ly: If you mean the very final moment, which is left open, it’s because I want to let people have some hope, let them think, yes, we can sit around a table and discuss this. The film is a cry of alarm. Admittedly, the situation is very, very bad, very dramatic, but that’s precisely why I did it the way I did, in terms of the very final sequence.

DW: I understand that. But, before that final moment, there is a kind of revolt. I wonder if you see signs of opposition, this is the year of the “yellow vests” and other movements. Because I have not seen that element of revolt in a great many films. It’s something new.

LL: They are the poor, the wretched. And the poverty-stricken must revolt, like young Gavroche in Hugo’s Les Misérables [who, in the novel, joins the revolutionaries in 1832]. Like Gavroche, the youth are rebelling against all form of authority. It’s not just a revolt against the police, it’s a revolt against everything, against the entire system that puts in place these figures, whether it’s the cops, the self-appointed “mayor,” the drug trafficker. It’s a general revolt.

I grew up in this kind of neighborhood. Things develop to a point. Young people look around and think, “Now what?” Things explode.

DW: Could you explain the significance of the connection to Victor Hugo and his novel?

LL: These are also the wretched. There is no difference, poverty stays the same. It’s not the same epoch, but poverty remains in this area.

Victor Hugo described the social misery perfectly. You could take practically the entire book and apply it to the present conditions there.

DW: Can you describe the conditions that exist in that neighborhood?

LL: The situation has been like this there since the 1980s. Thirty years ago all of these areas were abandoned by the authorities. The jobless rate is 40 percent, there’s delinquency, young and old, all the numbers are in the red. Nothing has changed during the period I can remember.

It’s a universal film. It’s not specific to Paris or France. The conditions exist in the US, Brazil, Africa. They create ghettos where the poor are forced to live. It’s a global movie.

DW: Specifically, speaking of France, the unions, the so-called left parties, really have nothing to say to the youth in this neighborhood, do they?

Does the “left” really exist today?

DW: This is not treated directly in this film, but could you explain your attitude toward the current attacks on refugees, on immigrants in Europe?

LL: It’s a catastrophic situation. I can speak of the situation in Africa, as a French-Malian.

The political system in France and all over Europe is corrupt. Big corporations run the system.

The responsibility lies entirely with Europe, with the political system. The African governments are marionettes, manipulated for the most part by the West. The French colonial system was in place for more than a century. The African countries achieved independence, but it is not a real independence. You have all the multinationals in Africa, which loot the continent.

It’s not astonishing that Africans have to emigrate. If the African countries really controlled their resources, their wealth, there would be few Africans clamoring to come to France by boat, because Africa is one of the most naturally rich continents. The multinationals, the millionaires make their fortunes out of Africa. Ninety percent of uranium in Europe used to generate electricity comes from that continent.

People complain, on the one hand, about all the illegal immigrants, but how many people actually think about why these people have to do what they do?

DW: Also people come because of the wars, in Libya, Syria, Afghanistan…

LL: In the end, these are all economic wars, launched to loot the other countries. There is the talk about terrorism and Al Qaeda. But who created Al Qaeda, who financed and armed it? Those are the real questions that have to be answered.

DW: The film presents a somewhat intimate view of the police. But, in the end, there is little difference between the “good cop” and the “bad cop,” they are all at the service of the same system. Is that true?

LL: Everything comes from above. Most of the police are young people badly trained, badly educated. They are thrown into these difficult situations in the neighborhoods, and because of their lack of training, it’s very easy for them to panic. A lot of them when they panic, they pull the trigger. It’s not their personal fault, it’s the system, the way they are “untrained” to end up doing what they are doing.

President Macron announced a plan for these areas six months ago, but on the eve of the meeting, he canceled it.

If nothing is done, then someone else in 20 years will come along and make a film very much like mine about exactly the same problems.