The strike by graduate students at Harvard University enters its second week today. The approximately 4,500 striking members of the Harvard Graduate Student Union–United Automobile Workers (HGSU–UAW), which represents more than 4,500 graduate and undergraduate teaching staff and graduate research assistance across Harvard, began their strike on December 3, the last day of classes at the Faculty of Arts and Sciences, at the Ivy League school’s campuses in Cambridge, Massachusetts, and Longwood in Boston.

The strike has impacted teaching responsibilities covered by the student workers, including holding review sessions, grading assignments, and hosting office hours. Exams, which are set to begin today, could also be affected. 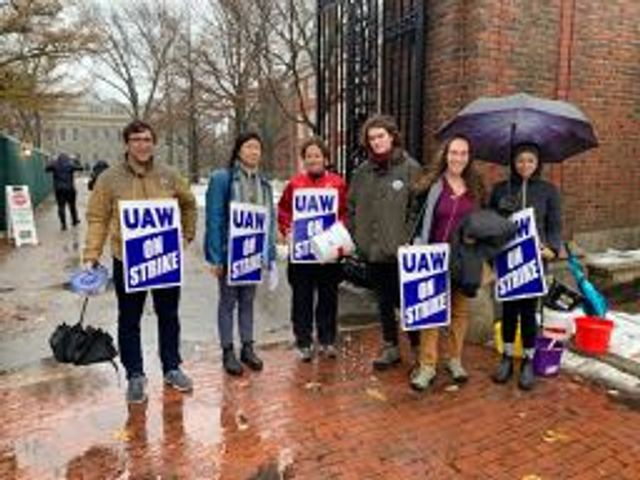 Harvard grad strikers at a gate to the university

However, the Harvard grad student’s union has made clear that its picket lines are “porous,” allowing students, professors and professional university staff to pass through them. Despite the support of campus workers for the grad students, there has been no effort by the UAW-affiliated HGSU to call for a shutdown of the campus, or to call for support from the tens of thousands of university workers in the Greater Boston area.

US House Representatives Ayanna Pressley and Katherine Clark, both Democrats, spoke to striking grad students in Harvard Yard on Monday morning. Pressley said: “I want to make sure that this university hears our collective voices, to confirm the humanity and dignity of all workers… I just want to say what an honor it is to share these steps and to do this work with Katherine Clark, the vice chair of our caucus, who is the leader on so many social justice issues—from workers’ rights, to gun violence prevention.” She cited abolitionist leader Frederick Douglass in her remarks, declaring, “we have to demand basic rights for you.”

Her words of support are hollow. The Democrats, no less than the Republicans, have carried out savage attacks on jobs and living standards for workers, as well as on education. The Obama administration oversaw the wholesale conversion of public school systems into for-profit charters, and his former Chief of Staff Rahm Emanuel oversaw dozens of school closures as mayor of Chicago. Moreover, since the 2016 elections they have focused their opposition to Trump entirely on a pro-war basis, while ignoring the real crimes against the working class carried out by his administration.

The HGSU-UAW’s conduct of the strike is part of a deliberate strategy to isolate and defeat the graduate students. The UAW employed similar methods in the General Motors strike earlier in the fall, when it isolated the strike to GM, tried to starve them into submission on a paltry $250 per week strike pay and ultimately forced through historic concessions, including plant closures and a blank check for the company’s use of temps. The UAW is currently seeking to push through even deeper concessions at Fiat Chrysler.

At the same time, Democratic presidential candidates flocked to the picket lines for photo-ops whose aim was to bolster the credibility of the union, which has been exposed by a massive bribery scandal as a management-controlled labor syndicate.

World Socialist Web Site reporters covering the Harvard grad student strike have sought to raise the necessity of uniting workers at Harvard and beyond in a political struggle which is not tied to the two big-business parties and the pro-capitalist and nationalist trade unions.

The WSWS spoke to strikers and their supporters leaving a support concert for the strike at Memorial Church in Harvard Yard on Monday.

Our reporter spoke to Michael: “You’ve been on strike since Tuesday. Obviously, there’s a tremendous need for this to take place, considering the use of grad students as low-paid labor. What we are saying in particular is that there’s a need for the widening of this strike throughout the campus, but not simply for moral support. It’s difficult to figure out how the issues in the strike are going to be resolved outside of that.”

Michael said, “I think the more support, the better, obviously. But the hope is that right now there is an initial pressure point, there is a lot of end-of-term work, some of the students are not being advised, or graded or proctored. And what if this really carries on a while, the new semester will be the second big pressure point.

“Hopefully it doesn't get to that, but the hope is that we’re standing in a moment that it will cause paramount disruption. At least at those two moments. Obviously, it’s long past due for Harvard to agree to a new arrangement in terms of compensation and healthcare with arbitration. Personally, my feeling is that if it doesn’t happen now, my worry is that it will extend into January.”

We asked Michael if he knew anything about the recent history of the UAW and the GM strike that took place.

“Yes, I was following the GM strike a bit,” he said.

The WSWS described how the UAW, which has pushed through the contracts at the other auto companies, has allowed the continuation of two-tier wages and part-time work. The conditions which the UAW has worked to enforce at these multi-billion dollar corporations are similar to the part-time work by graduate students at Harvard, which has a $41 billion endowment.

The fact that the UAW was ultimately able to force through concessions at GM and Ford was not due to a lack of determination to fight on the part of autoworkers, but due to the betrayal of the UAW.

Harvard grad students on strike, in order to win their struggle, need organizations that will fight for their social and democratic rights. But such organizations must be democratically controlled rank-and-file committees, independent of the unions and the two big-business parties, the Democrats and Republicans.

Grad students’ allies are not to be found within the unions and the Massachusetts congressional caucus. Rank-and-file committees should reach out to the thousands of transit workers, service employees and research and tech workers in Greater Boston to fight the Trump administration’s austerity measures and the millions of workers around the work fighting the obscene levels of social inequality created by the capitalist system.

We urge grad students who agree with this fight to contact the International Youth and Students for Social Equality today.