On December 18, reporters from the World Socialist Web Site (WSWS) discussed the current situation in France with workers at the main Daimler plant in Sindelfingen, Stuttgart. French workers have taken strike action for the past three weeks against the government headed by President Manuel Macron, which plans to radically reform the country’s pension system.

The protests have been largely ignored by the media in Germany, and workers changing shifts knew relatively little about the strikes. What they did know, however, prompted them to support the protests unconditionally. 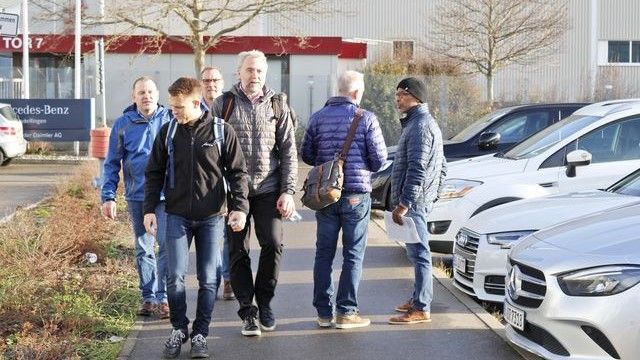 WSWS reporters distributed the perspective “The way forward for the mass strike in France” and explained that the French workers’ action was a crucial development in reviving global class struggle. The article states: “The resurgence of mass strikes and protests around the world is showing again that the decisive revolutionary force in capitalist society is the working class, and that the revolutionary struggle for socialism is on the historical agenda.”

Workers in the global auto industry face tremendous challenges next year. Audi and Daimler alone have recently announced that 20,000 jobs are to be cut. Auto suppliers such as Bosch, ZF, Continental and Mahle have announced the layoff of more than 10,000 workers, and this is just the beginning. Relying on the support of the country’s trade unions, automakers and suppliers are planning unprecedented attacks on workers aimed at wiping out the concessions won through struggle in the past.

Twenty-five thousand workers work in the Sindelfingen plant, located 25 kilometres from the Daimler headquarters in Stuttgart. The factory currently produces S- and E-Class models, the T-model and the all-terrain off-road variant, as well as the Mercedes-AMG GT vehicles. Daimler plans to integrate Sindelfingen into its worldwide production network for electric vehicles. In the future, the company plans to produce premium and luxury-class electric vehicles as part of its global production network.

Workers are uncertain about their future following the announcement of the slashing of 10,000 jobs. They increasingly realise that the IG Metall union represents exclusively the interests of management when it comes to the transfer to electro-mobility and digitalisation. At the last plant meeting in early December, the chairman of the works council, Ergun Lümali, not only declared his explicit support for the planned job cuts, he also indicated that further job losses were inevitable. The works councils would do everything to “accommodate people in this great transformation process,” Lümali said.

His message was basically that workers should rely on the mercy of management and the IG Metall to guarantee their future. Lümali continued: “But this will only succeed if the company presses ahead with electro-mobility in the spirit of Daimler and Benz and we insure employees and employment with realistic company agreements in future.”

Discussions with workers gave a sense of the growing opposition to these hackneyed and hollow promises on the part of the union, and the workforce’s search for alternatives.

Many workers expressed their fears for the future, taking the leaflet and briefly declaring their agreement. “Things also have to change in Germany. I would immediately take part if two million took to the streets here,” was a typical comment.

Achim has worked at Daimler for over 30 years, and criticised the fact that there is no detailed coverage in the German media of the strikes in France. Strikes were the only weapon that could stop the French government’s plans, he said. The mood among workers in the factory was a mixture of fear and anger.

“Since the announcement of the layoff of 10,000 workers, everyone at the plant is concerned about the future,” he said. “What the management and unions say is not credible. There are many rumours circulating, and in the past such rumours have always come true. We are told that next year only half of the cars we produce will be sold. If that’s the case, then more layoffs are inevitable. “

He doesn’t trust the job guarantee until 2029, which has been praised by IG Metall: “I do not believe it. They will find ways and means to enforce layoffs.” Achim wants workers to organise strikes here, like those in France. “I would join the strike without hesitation.”

Thomas is currently working as an engineer at Daimler, starting as an apprentice 38 years ago. He reported that the situation at his workstation was very bad. “Very few workers are doing a great deal of work, involving much overtime.” In order to cope with the workload his department needed several more workers. The company management and IG Metall would reject employing more staff, citing the savings program they have agreed.

“I started as an apprentice and have lived a reasonably good life. I hope to be able to retire early,” he said. He could afford it. “But I don’t think the younger generation will have a life like mine.” It is becoming increasingly difficult for young people to find a decent job. “If you get one, the money is not enough and you are forced to do a second job, and even then you have problems to cover the costs of living.”

Thomas totally supported the general strike in France and regarded it as a courageous step against the pension reform affecting millions of people. In Germany he thinks a general strike such as that in France would be difficult, because the unions cannot call for a general strike for legal reasons. “Even if it were possible,” he said. “they would not do it. I have had long experience with IG Metall.” The union would never voluntarily call for a strike. “But your suggestion to form committees independent of the union would be an alternative,” he said. “Things will not remain the same forever, change is on the way.”

A shop steward who chose not to reveal his name said that the strikes by French workers were the right thing to do. Pensions were declining across Europe and the reforms planned by the French government were aimed at lowering pensions in France below the European norm. “A strike is the only way to fight it,” he said. When asked about the unification of European workers, he replied that he would welcome such a development.

He was sceptical, however, as to whether German workers were ready to take such a step. WSWS reporters pointed out that the unions were the main obstacle preventing workers from unifying across national borders. That is why the first step had to be a break with the unions. The shop steward replied that he had known of the WSWS and the autoworker newsletter for some time, and would not oppose workers breaking with the unions and forming their own independent committees.

Many workers stressed that they would immediately participate if there were strikes and protests such as those in France, and hardly anyone believed that the IG Metall would organise such measures. Workers increasingly see the union as part of the problem and no longer as a solution.

At the same time, they appeared to be waiting for someone to give a signal to begin. The WSWS and the Socialist Equality Party (SGP), which provides a perspective for workers worldwide on a daily basis, will do everything it can to support the establishment of independent action committees in factories, and facilitate the international unification of workers. But neither the WSWS nor the SGP can act as a substitute for the workforce. The liberation of the working class must be the work of the class itself, as Karl Marx and Friedrich Engels wrote.

Some workers have to take a lead. The time has come. Contact us to undertake the initial steps in the struggle to defend jobs, wages and working and living conditions.