Japan to deploy military forces to aid US operations against Iran

On Friday, the Japanese cabinet of Prime Minister Shinzō Abe approved plans to dispatch naval personnel to the Middle East, ostensibly to protect oil vessels in the region. The deployment consists of a destroyer with helicopters, as well as one of two P-3C patrol aircraft from its base at Djibouti on the Horn of Africa, Japan’s only overseas military base. The deployment could begin as soon as January and will last for at least one year, according to government sources. 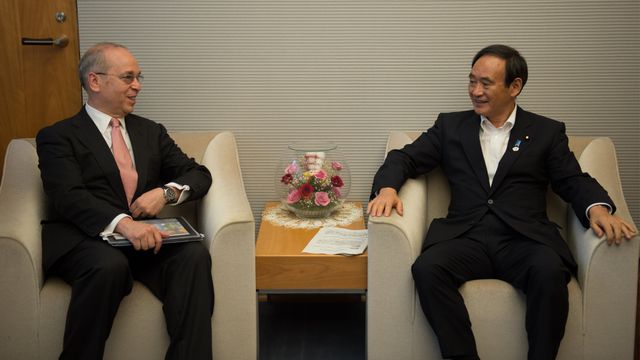 Tokyo claims the mission will be limited to intelligence gathering to ensure “peace and stability” in the Gulf of Oman, the Gulf of Aden and the northern Arabian Sea. It also claims that this will be done independently of other nations. However, speaking at a news conference, Chief Cabinet Secretary Yoshihide Suga said these operations could be conducted in “coordination with relevant countries”—i.e., the United States.

Since Washington ratcheted up its pressure on Iran by abandoning the 2015 nuclear agreement in May 2018 and then accusing Iran of carrying out attacks in the region this past summer, the Trump administration has pushed allies like Japan to contribute forces in preparation for a military conflict.

Japan has been reluctant to join this operation as nearly 90 percent of its oil comes from the Middle East and, unlike Washington, Tokyo maintains friendly relations with Tehran. The previous week, Abe met Iranian President Hassan Rouhani in Tokyo, where the prime minister reportedly briefed his counterpart on the deployment.

Tokyo is attempting to show the deployment as a compromise between the demands of Washington and relations with Tehran, stating that the Japanese military will not join US patrols through the Strait of Hormuz, although this has not been ruled out in the future. “We cannot abandon Japan-related vessels,” a government source stated in relation to the possibility of more aggressive actions in the region.

The Abe administration is using the deployment as another opportunity to further its militarist agenda. While Article 9 of Japan’s post-World War II constitution, known as the pacifist clause, legally bars Japanese governments from maintaining a standing military or deploying it overseas, Tokyo has for decades used “reinterpretations” to allow Japan to operate the Self-Defense Forces (SDF), the formal name of Japan’s military.

The Abe administration passed highly unpopular military legislation in 2015 to justify its own “reinterpretation” of the constitution the previous year to allow the SDF to take part in military actions overseas alongside allies in the name of “collective self-defense.” These moves were part of Abe’s goal of revising the constitution by next year.

The latest naval deployment to the Middle East goes far beyond its stated purpose. First, it is meant to put into practice the 2015 legislation that allows the SDF to be dispatched anywhere overseas and enter a conflict in the aid of an ally. While the forces in the region will be barred from using their weapons, this could change with an order from Defense Minister Tarō Kōno.

Second, the deployment is another incremental move toward full remilitarization, which continues to remain deeply unpopular in Japan. A July poll found that 56 percent of people oppose revising Article 9, while only 32 percent supported it. The new mission to the Middle East, the Abe administration hopes, will help normalize overseas military actions in people’s minds and wear away opposition to constitutional changes, which require a national referendum to pass.

The government is sending Japan’s navy into a potential war zone under entirely false pretences. In June, Washington came within 10 minutes of launching an attack on Iran in supposed retaliation for attacks on oil tankers, one of which was Japanese-operated, as well as Saudi oil facilities and other targets. Tokyo at the time questioned whether Tehran was involved.

The credibility of US claims that Iran is responsible for acts of aggression fails to stand up to scrutiny. United Nations Secretary-General António Guterres issued a report on December 10 stating that the UN was “unable to independently corroborate” that Iran carried out strikes this year on facilities in Saudi Arabia.

Given the impeachment conflict and wider political discontent in the US, it is entirely possible Trump could decide to launch an attack on Iran in order to deflect those tensions outward. Such an attack could draw in major powers like China and Russia. This is the context of Japan’s decision to deploy military forces.

The new deployment will be supported by another record-high annual military budget, approved by Abe’s cabinet on December 20. The budget for the fiscal year beginning April 1, of 5.31 trillion yen ($US48.56 billion), increased by 1.1 percent. This is the sixth year in a row that military spending has reached a record high and the eighth straight year of increased spending. Since Abe came to office in December 2012, the military budget has grown by 13 percent.

That figure in the budget does not take into consideration future supplementary military spending. For 2019, Abe’s government allocated 428.7 billion yen ($US3.9 billion) in additional funds, a practice that has become common in recent years and can be expected to continue in 2020.

The increased spending will continue to intensify tensions with China and North Korea, as an arms race develops. Next year alone, Tokyo intends to purchase six F-35B and three F-35A stealth fighter jets from US arms manufacturer Lockheed Martin, with a price tag of 79.3 billion yen ($US725 million). In total, Japan plans to buy a total of 147 variants of the jet, including 42 F-35Bs, capable of short take-offs and vertical landings.

The F-35Bs will be deployed on Japan’s de facto aircraft carriers, which are the first offensive vessels in its navy since World War II. Tokyo will spend 3.1 billion yen ($US28.3 million) to reconfigure the Izumo helicopter carrier next year to accommodate the fighter jets. Its sister ship, the Kaga, will be refitted in the future.

Tokyo will also use funds to scout locations and begin building two Aegis Ashore missile batteries, purchased from the US. The batteries will further integrate Japan into Washington’s ballistic missile system throughout the region, which is being developed in preparation for war with China.