Catastrophic fire conditions exist today throughout much of Australia, from the southwest of Western Australia, across South Australia, to Victoria, the island state of Tasmania, and New South Wales (NSW), to the southeast of Queensland and areas of the tropical north. Another severe heat wave is moving across the continent, generating temperatures that may breach historical records that were broken only a few weeks ago. New fires are expected to ignite, while strong winds are predicted to fan the hundreds of blazes that are already burning. Hundreds of thousands of people were urged yesterday to evacuate the most-at-risk areas. 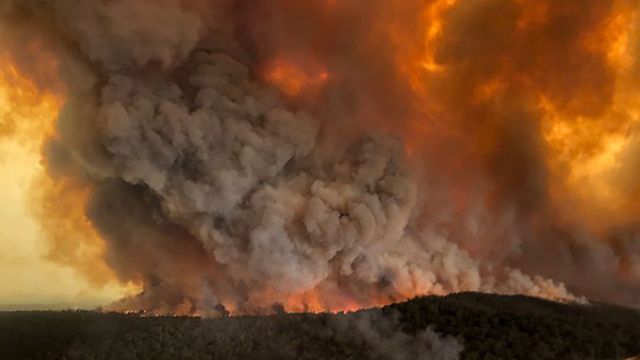 Wildfires rage under plumes of smoke in Bairnsdale, Australia. (Glen Morey via AP)

Summing up the situation in a large swathe of NSW, stretching virtually the entire length of the state, the deputy commissioner of the largely volunteer Rural Fire Service (RFS) told a press conference: “We can’t stop those fires. We can’t stop the fires we already have.”

The unfolding catastrophe has utterly discredited the Liberal-National Coalition government headed by Prime Minister Scott Morrison, which just months ago was boasting of its refusal to accept that Australia should take greater action to reduce carbon emissions.

In September, Morrison condemned teenager Greta Thunberg, and the climate protests she led, for “raising the anxieties of children in our country.” Even as the fires worsen, he has continued to downplay the undeniable relationship between long-term global warming and the vastly increased fire risks facing the country (see: “Australia: Climate change and the bushfire crisis”).

Anger will not, however, be limited to Morrison and his government. The opposition Labor Party has held office for 19 of the past 37 years and, despite all the scientific warnings, likewise sought to delay or block responses to climate change that would impede on corporate operations and profits. State governments, both Coalition and Labor, have left firefighting almost exclusively to volunteer services, while cutting their funding and refusing to provide them with the necessary vast expansion of equipment.

At all levels, government policy has been preoccupied with reducing taxes on corporations and the wealthy, driving down wages and working conditions, abolishing restrictions on profit-making and fueling the speculative rise of the stock market and property values. Military spending, in preparation for new conflicts and war, has been boosted, while expenditure for essential health and emergency services has been strangled. This criminal indifference of the Australian ruling elite to the threat of climate change has its parallels around the world.

In an interview on Australian Broadcasting Corporation (ABC) radio on Thursday, former NSW Fire and Rescue commissioner Greg Mullins made a damning indictment of both Morrison and, by implication, the state authorities.

He declared: “We have tried since April to get a meeting with the prime minister… We had some pretty simple asks that we wanted to talk to the government about. Funding for large aerial fire tankers. People would have seen the images the other day of the Hercules coming in and dropping in 15,000 litres of retardant at Turramurra. I watched that with great interest because I was in charge of the fire there in 1994 where 17 homes were lost. That cut the fire off immediately. We’re only going to have seven of those this year. I’ve just come back from California and they had about 30 on one fire.”

Mullins continued: “[T]his was going to be a horror fire season. They [aircraft] can be a decisive weapon. If they [the government] had spoken to us back then, maybe they could have allocated more money to have more of those aircraft, but they didn’t and they’re probably not available now.”

Since the unprecedented beginning of the fire season in September, up to five million hectares has already been burnt out in NSW alone. In just the past four days, an estimated 500 houses have been destroyed in the South Coast region of the state, including in the township of Cobargo, where furious residents denounced Prime Minister Scott Morrison on Thursday.

Today, lives and properties are under threat in the South Coast, the Mount Kosciuszko national park region, the Snowy Mountains, and the Blue Mountains to the west of Sydney. The RFS has issued warnings that wind conditions could result in fire and ember attacks, reaching into outer north-western suburbs of Sydney itself.

In Victoria, state authorities have issued “evacuate now” notices, strongly urging over 100,000 people to leave large areas of the east and northeast of the state—potentially the largest evacuation of civilians since World War II. The region is proudly promoted by tourist authorities as offering “a host of wilderness and wildlife, great drives and gourmet treats,” with “the largest lake system and one of the longest beaches in the Southern Hemisphere.” Today, Gippsland and its natural beauty is ablaze, along with much of the rest of eastern Victoria. An estimated 600,000 hectares has been burnt out in the past week.

Two people have lost their lives in the Gippsland fires this week, and 21 are listed as missing. Vehicle access into a number of coastal communities has been cut off. The Navy was deployed on Thursday to evacuate some of the residents and tourists trapped in the town of Mallacoota, where a firestorm forced some 5,000 people to seek safety on the beach. 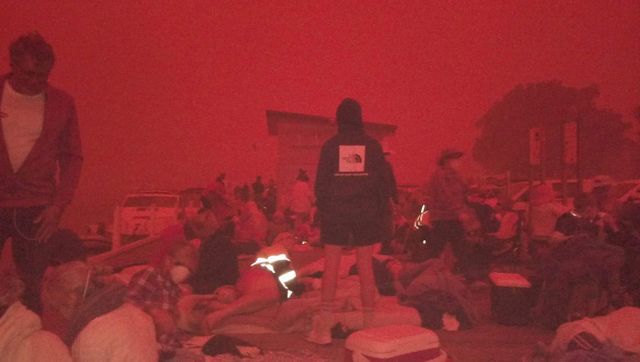 Two people lost their lives yesterday in the fires on Kangaroo Island—off the coast of Adelaide in South Australia, and advertised as “one of the world’s great nature-based destinations.” The island is ablaze with “virtually unstoppable” fires that have burnt out 100,000 hectares.

Once again, Adelaide, Melbourne, Sydney, Canberra and other major population centres will be blanketed in smoke and endure “hazardous” air quality. The Australian Medical Association (AMA) issued an alarmed warning yesterday. It stated: “The length and density of smoke exposure is a new and possibly fatal health risk that many people within our community have not previously had to face.” Chris Moy from the AMA told the Guardian: “There are people who are going to probably die from these conditions.”

Nationally, the 2019–2020 fires have so far caused 24 known deaths and destroyed over 1,500 homes. Hundreds of farm buildings and other structures have been lost. Agriculture and stock losses are enormous. Over six million hectares have burnt out and scientists estimate that 500 million native animals and birds are likely to have been killed. And this is before the hottest summer months and the historically worst period of the fire season.

As with all “natural disasters” around the world, the working class and poor are paying the greatest price. Tens of thousands of workers and contractors in the agriculture and tourist industries have already been stood down or lost their jobs. The extreme temperatures and hazardous air pose the greatest threat to those with medical conditions who live in the low-income suburbs of the cities and regional towns, which are also generally the most heat-affected and have the most under-resourced and overstretched health services.

The capitalist ruling class and its political apparatus are bereft of any answers to the consequences of a climate crisis that their indifference and inaction have created.

In its latest, desperate attempt to portray itself as doing something, the Morrison government today announced a call-up of a few thousand Army reservists, who are not trained for either firefighting or emergency service provision to civilian communities.

The bankruptcy of the official establishment has also been summed up in the statements of Labor Party opposition leader Anthony Albanese over recent days. He has declared the situation a “national emergency” that requires a “national response” that is “appropriate to the scale of the emergency.” As to what that response should be, Albanese has only offered that Labor will “listen” and have policies prepared for the 2022 federal election.

Climate change and its consequences are, in fact, a global emergency: a reality now well understood by hundreds of millions of workers and young people around the world. It demands a global response that ends the subordination of every aspect of economic and social life to the accumulation of private profit for a capitalist minority.

The fire catastrophe in Australia should further motivate the fight to develop an international and independent movement of the working class, unified across national borders and with the perspective of forming workers’ governments that will implement the most far-reaching socialist policies.

The major banks and corporations, especially the fossil fuel-based energy conglomerates, must be brought under social ownership and democratic control. The resources must be committed to both preparing society for the wide range of predicted impacts of long-term global warming, while drastically reducing carbon emissions and stemming further threats.