Russia’s Gazprom and Ukraine’s Naftogaz gas monopolies announced Monday, December 30, that they had finally reached a deal to continue the transit of Russian gas through Ukraine to Europe.

The deal was preceded by the Normandy talks held last month in Paris, involving the French, German, Russian and Ukrainian governments. While Russia and Ukraine agreed on a continuation of a prisoner exchange and an armistice, the Zelensky government objected to any peace deal that grants the separatist controlled regions political autonomy or allows for local elections without Kiev in control first. 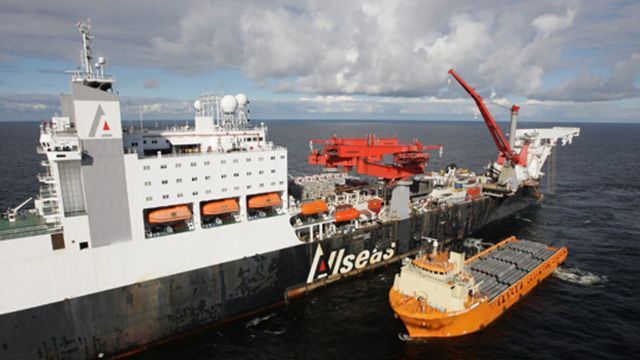 The Solitaire, a ship laying pipe as part of the Nord Stream gas pipeline project in the Gulf of Finland (Photo: archive.government.ru)

The new gas accord was reached just one day prior to the expiration of the former 10-year deal after what Russia’s Gazprom President Alexey Miller called “five days of non-stop bilateral talks in Vienna” led by European Commission Vice-President Maroš Šefčovič. Ukraine had earlier insisted on a ten-year contract while the Kremlin only offered a one-year extension of the last contract.

According to the terms of the deal Russia is obligated to send 65 billion cubic meters (bcm) of gas through Ukraine in 2020 and then 40 bcm of gas from 2021 to 2025. In exchange, a cash-strapped Ukraine will receive around $7 billion in much-needed transit fees. Gazprom also paid out to Naftogaz $2.9 billion to resolve the terms of a 2018 legal case it lost in Stockholm court while Natfogaz agreed to withdraw another $12.2 billion claim against the Russian energy giant.

Prior to the announcement of the 11th hour deal there was much concern in both Ukraine and Europe that without a deal in place gas supplies to Europe could be severely interrupted during winter, right when they are needed the most. Currently 40 percent of Russian gas headed to the EU passes through Ukraine. Gas supplies to Europe had already been interrupted twice in last 13 years due to tensions between Moscow and Kiev.

Following the deal, energy prices across Europe dropped precipitously, with German power shares reaching their lowest price since May 2018 and European Commission Vice-President Šefčovič claimed the deal was a “hat trick” in which “everyone is a winner.”

Russia currently supplies Europe with approximately 40 percent of its natural gas and its share of the market is expected to increase in coming decades as European gas production shrinks. Ukrainian officials, such as Prime Minister Oleksiy Honcharuk and Naftogaz, who had previously boasted about stockpiling gas for winter if an amenable deal could not be reached, greeted the accord with enthusiasm, claiming that Ukraine had achieved the “impossible.”

In reality, the deal was only reached due to the intervention of the European Union, particularly France and Germany who were not willing to have their energy security put in jeopardy by Ukrainian intransigence, and the US sanctions against Nord Stream 2.

Germany is the world’s biggest natural gas importer, obtaining 92 percent of its natural gas outside of its borders. According to Bloomberg News, between 50 and 75 percent of that comes from Russia’s Gazprom. Accordingly, German Chancellor Angela Merkel called the agreement a “good and important signal to guarantee the security of our European gas supply.”

France has also moved closer to Russia in recent years as Gazprom increased its gas exports to the country by 58 percent between 2013 and 2018.

The deal became even more necessary for the EU after Allseas, a Swiss-Dutch company that had been constructing Russia’s Nord Stream 2 gas pipeline, announced they were immediately ceasing all work on the project due to United States sanctions of the Nord Stream 2 pipeline included in the massive $738 billion 2020 National Defense Authorization Act. Allseas had been expected to lay 96 percent of the pipes needed for the project, which once completed, will carry gas directly from St. Petersburg to Germany.

Prior to the imposition of sanctions and the effective end of work on Nord Stream 2, Russia had taken a hard line with Ukraine by refusing to enter any long-term deal with Naftogaz and instead offering Kiev a mere one-year deal along with the demand that any legal claims against it be dropped.

Ukrainian officials rejoiced at the announcement of the US sanctions and Naftogaz’s CEO Andriy Kobolyev claimed that the Nord Stream 2 sanctions “facilitated” the negotiations between the two sides.

The sanctions against the pipeline have also exacerbated imperialist tensions between the United States and Germany with Germany’s Finance Minister calling the sanctions “a serious interference in the internal affairs of Germany and Europe and their sovereignty.”

While both countries backed the fascist-led coup in 2014 that deposed then President Viktor Yanukovych and installed a right-wing nationalist government in Kiev hostile to Moscow, the United States and Germany have rival imperialist interests and strategies in the country, which are reflected in their differing stances on resolving the now six-year-long civil war in Eastern Ukraine that has claimed the lives of 14,000, displaced 1.4 million and left 3.5 million in need of humanitarian assistance.

It remains unclear, however, whether the US sanctions against Nord Stream 2 will actually prevent the completion of the pipeline’s construction. Germany’s Deutsche Welle has reported that Nord Stream 2 is already 94 percent complete and according to Russian Energy Minister Alexander Novak the country will redeploy its own pipe-laying vessels “within a couple months” to complete the project.

In addition to the Nord Stream 2 pipeline, Russia is also planning to complete a second new gas pipeline to Europe called TurkStream in 2020 through the Black Sea and Turkey and then potentially north via Bulgaria, Hungary, Romania and Slovakia.