Coal miners laid off last month from an eastern Kentucky mine have not been paid their final paycheck or money owed to them for unused vacation days. Following the pattern set by Blackjewel Coal last summer, about 75 miners who were laid off from the Perry County Coal Company before Christmas have not received their final paychecks.

Another 24 miners, maintenance crew and security guards who are still working at the mine, have also not been paid since mid-December. The mine is located in Hazard, Kentucky, 55 miles north of Harlan, the site of the Blackjewel mine.

In July 2019, Blackjewel refused to pay nearly 2,000 miners the money they were owed when the company filed for bankruptcy. The company also held up healthcare and pension benefits, and even child support payments. 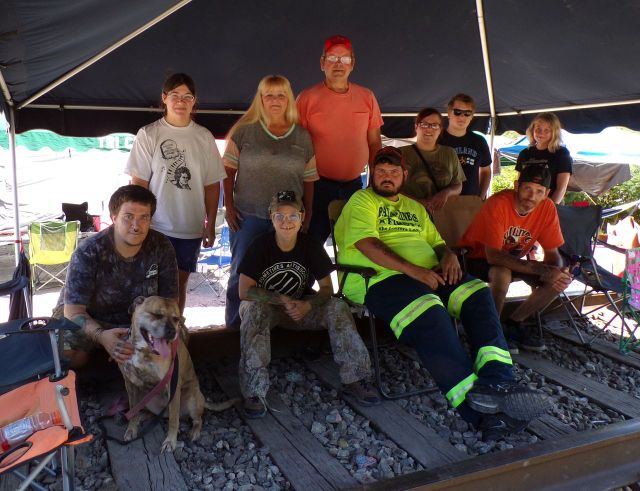 Blackjewel miners and their supporters

Blackjewel only paid a portion of the back money after a group of miners occupied railroad tracks outside one of the company’s Harlan County mines, preventing Blackjewel from selling coal it had been stockpiling before the bankruptcy. The miners in the eastern Kentucky county, once known as “Bloody Harlan,” have a rich tradition of class struggle dating back to the 1920s and 1930s.

Bobby Stevens, a former Blackjewel miner who also worked for Perry County Coal, told the Lexington Herald-Leader the Blackjewel case set a precedent for coal companies to avoid paying workers during bankruptcy proceedings. “I believe these companies are going to keep on doing that until somebody steps forward,” Stevens said.

In the case of Perry County Coal, the Indiana-based American Resources Corporation, which owns the mine, has gone even further, refusing to pay their employees before they filed for bankruptcy.

David Mullins, former general manager of Perry County Coal, admitted to the Lexington Herald-Leader Monday that the company had not paid the miners and other employees what they were owed.

American Resources Corporation purchased the mine in September from Cambrian Coal, which filed for Chapter 11 bankruptcy last year and quickly sold off its eastern Kentucky assets. At the time of the purchase, over 300 miners worked there. Since taking over the mine, ARC began making cutbacks and putting people out of work.

Mullins said the new company twice failed to pay worker’s compensation insurance forcing workers to be sent home. It also failed to pay for health insurance for many miners. “I don’t know why the judge let them have it,” Mullins told the bankruptcy court. “They were never in a position, financially and permit-wise, to be able to take that company.”

Like so many other coal companies, Cambrian used the tried and true practice of dumping its obligations to workers and their communities by resorting to the bankruptcy courts. For decades now, coal companies have used federal bankruptcy laws to pass off their liabilities to shell corporations, which then just close up shop, leaving workers without jobs, healthcare or pensions. Communities with massive environmental damage are left with no funds clean up.

When American Resources purchased the mine, federal regulators were blocking ARC from obtaining new mining permits because of 36 outstanding violations by the company. According to court filings, the company should not have been allowed to buy the mine. Yet despite this and the fact that ARC did not have the resources or knowledge to run the mines, they were granted ownership.

The failure of companies to pay miners money owed for time they have already worked is now becoming a new standard as mining companies attack their workers to make the most profits.

Kentucky law requires coal companies to purchase a bond to cover one month of wages in case of bankruptcy. American Resources, like Blackjewel, never purchased the bond. In fact, a review of records by the Herald-Leader after the Blackjewel bankruptcy showed that no new mining operation has purchased the required bond over the past five years.

Layoffs continue to mount in the region. Murray Energy-owned Western Kentucky Coal Company announced the day after Christmas that it was laying off all 300 miners from the Genesis Mine in Centertown, Kentucky. According to a notice sent by the company to the Kentucky Office of Employment and Training, the layoffs will take place on February 24 or within the following two weeks.

Murray Energy, the largest underground coal mining company in the US, filed for bankruptcy last October and is in the process of cutting the healthcare and pension benefits of its current and former employees.

The United Mine Workers union, which was once a major force in eastern Kentucky, has long been a non-factor in the coalfields after decades of betrayed strikes and collusion with the coal and energy corporations.

Despite Donald Trump’s promises to revive the coal industry, mining jobs have continued to be destroyed under his administration. Coal production has reached a 40-year low as power generation continues to switch to less expensive natural gas and renewables such as wind and solar.

Miners in the US