“It’s the big companies that are responsible for this”

At climate rallies last night, tens of thousands of people across Australia denounced the official response to the Australian bushfire emergency and called for the ousting of the federal Liberal-National Party Coalition government of Prime Minister Scott Morrison.

The protests expressed the seething hostility of ordinary people to the refusal of successive Labor and Coalition governments to mitigate the impacts of bushfires, or to take any action to resolve climate change, the major contributing factor to the intensity of the current crisis.

The rallies were held as fires continue to rage across vast swathes of the country. At least 26 lives have been lost, 2,130 homes destroyed and millions of hectares of bush and farmland burnt out. After decades of cuts to essential services, the fires have largely been fought by volunteers, while local communities are forced to deal with the fallout from the disaster themselves.

Estimates of the rally attendance in Sydney ranged from 30,000 to 50,000. Tens of thousands demonstrated in Melbourne, despite heavy rain, while thousands more protested in Brisbane, Newcastle and other major cities. 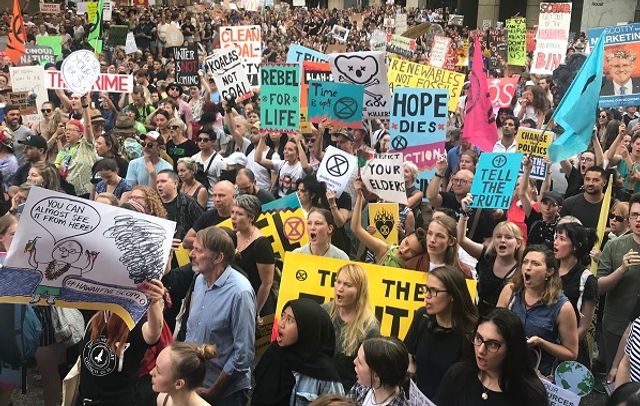 In Sydney, high school and youth speakers pointed to various expressions of the crisis, including the deaths of potentially billions of animals and the unprecedented smoke haze blanketing the city. One young woman recounted her own family’s flight from a blaze that almost destroyed her home.

Speakers received the strongest response when they called for the removal of the government, denounced the dominance of the banks and the corporations over every aspect of social life and called for the development of a mass movement against climate change and environmental destruction.

The organisers, however, including the Greens and the pseudo-left Socialist Alternative, sought to channel these sentiments behind impotent appeals to the parliamentary establishment.

The Labor Party was mentioned just once, in passing. This was despite the fact that Labor leader Anthony Albanese has limited his public interventions to the most tepid criticisms of the Morrison government, in the interests of ensuring “national unity.” He has insisted on Labor’s ongoing support for the coal industry, which is responsible for massive carbon emissions.

Labor, moreover, formed the federal government for 19 of the past 37 years. Between 2007 and 2013, the Labor governments of Kevin Rudd and Julia Gillard carried out sweeping austerity measures. Speaking in Melbourne, Greens member of parliament Adam Bandt limited the blame for the bushfire catastrophe to the coalition government, bemoaning the fact Scott Morrison “ripped up the carbon price.” The Gillard government, supported by the Greens, instituted a carbon tax, supposedly aimed at tackling climate change. In reality, under the government’s own modelling, Australia’s carbon emissions were set to rise for decades to come. The march in Melbourne

Nor did Sydney speakers mention the authoritarian demands from Victorian Labor Premier Daniel Andrews for the protests to be cancelled, on the spurious pretext that they were diverting police resources from the bushfires.

The reason is that the Greens, while occasionally posturing as an alternative, are campaigning for closer collaboration with Labor, including through the formation of coalition governments at the state and federal level. Federal Greens Senator Mehreen Faruqi called for protesters to direct their attention to “changing parliament,” i.e., electing a Labor and Greens government which would not challenge big business and preside over continuing inaction on climate change.

The Socialist Alternative speakers, who did not reveal their political affiliations, condemned big business and even “capitalism.” Their perspective, however, was limited to advocating more protest actions directed at placing pressure on the official parties. They spoke alongside the Greens, without mentioning that party’s overtures to Labor, and hailed the corporatised trade unions, which have overseen the decimation of workers’ jobs and conditions.

Campaigners for the Socialist Equality Party called for a turn to the working class, based on a socialist and revolutionary perspective. They explained that climate change and the bushfire crisis had revealed the incompatibility of capitalism with the most fundamental interests of ordinary people. To tackle the crisis, nothing less than the reorganisation of society, to meet social need, not private profit, was required.

WSWS reporters spoke to some of the protesters.

Arianna, a 23-year-old who works in childcare, attended the Sydney rally carrying a sign that read: “My mother’s property burned down while Scott [Morrison] was watching the fireworks.” She told our reporters: “My mother and her entire family is in Buchan [in Victoria]. She and her husband have lost a big part of their cattle farm. They will have to have the fences reconstructed. It will take years. Her mother-in-law has lost her home.

“Their house is insured but they can’t insure the entire property because they can’t afford it. The thing is that it takes so long to rebuild. By the time they rebuild, another fire season will have come along. My aunt has had to rebuild twice already. There’s no way to sustainably keep these communities going if this is the new normal.” 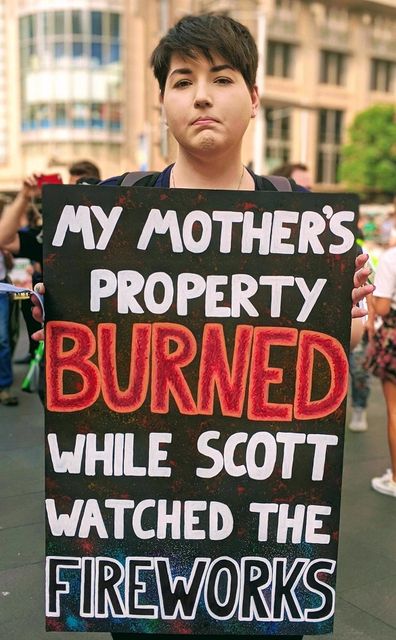 Arianna explained that her family has been unable to return to the farm to assess the damages, after it was burned before Christmas, because of the continuing fire danger in the area.

“So far all the support is coming from the community. They’ve set up centres where people can come and charge their phones and opened up their houses so that people can have showers and stay there. People who still have their fences are letting people keep their horses and cattle there.

“Their whole community is gone. I don’t have any way to express my anger. My mum’s entire side of her family is down there. There’s really not any official support.

“The short answer to why the governments are doing nothing is greed. The rich and those in power have their own houses, their own air conditioners. They can fly away to Hawaii. They’re not impacted. As long as they still have that money and power you can’t kick them into showing empathy.” 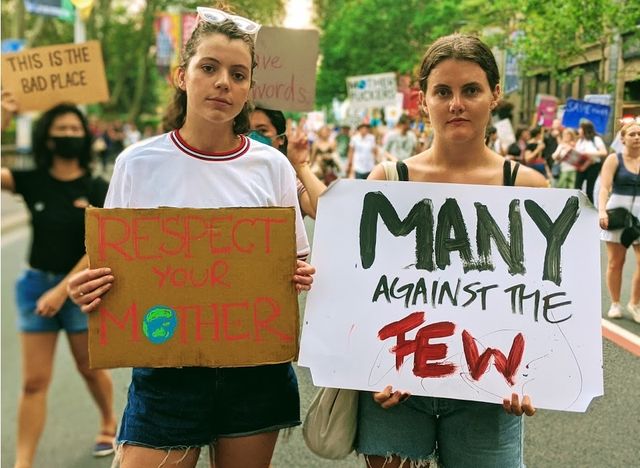 Lauren, a 22-year-old international relations and law student, explained: “I chose this sign saying ‘The many against the few’ because I think it speaks to the situation we are in. It’s the big companies that are responsible for this. It’s the few people who have the wealth that they want to protect, but the majority of working-class people value the environment more than being extremely rich.” 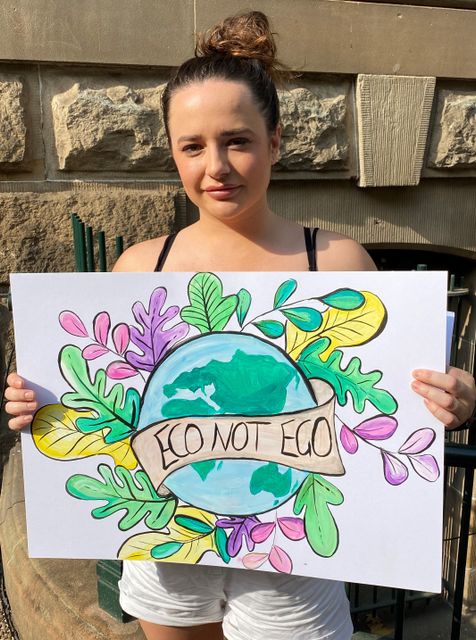 Abby, who recently graduated from university in medical laboratory science, said: “Lots of people come to these protests because we’re frustrated. There are conflicts of interest. I don’t think it’s just Labor or Liberal. It’s that Australian business depends so heavily on coal that it affects every aspect of politics. We have a lot of money for war and we don’t have a lot of money for education and health. It’s very frustrating. It seems that we are funding the wrong things and putting support behind the wrong things.”

Asked about the US threats of war against Iran, Abby stated: “Unfortunately we have this close alliance with the US. What I feel really bad about is that the people in the Middle East are going to suffer even more. It shouldn’t be their problem, it’s between a few people in the governments. They just need peace, and they want peace, but we’ve brought war to them. There’s a lot of fear-mongering and that’s how the military keeps getting funded and supported. If China and Russia get involved, we’re all screwed. It’s scary.” 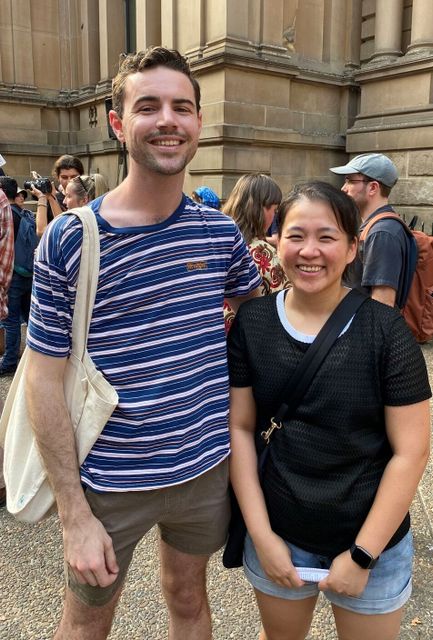 Matt, a doctor, commented: “The reason I’ve come out is because I’m completely disillusioned with how the government is handling the bushfire crisis. I think that we need to lead—as people and citizens—a push to renewable energy, because the government is entirely in the pocket of coal and energy businesses. I don’t think they’re going to make any changes unless we push for it.

“I don’t even think it’s about Scott Morrison, even though he is horrific. He just represents the entire institution that is regressive. I don’t think Labor is any better either. We need more progressive politics. We need to send a message to all of the parties that we need more change.”

Asked about the health consequences of the crisis, Matt said: “The medical fallout extends well beyond the impact of smoke from the recent bushfires. Global heating is completely changing the epidemiology of a lot of infectious diseases. We’re facing an international housing crisis over the coming decades from rising sea levels. From a health spending perspective, the actual toll that we are going to see from climate change is unfathomable.” 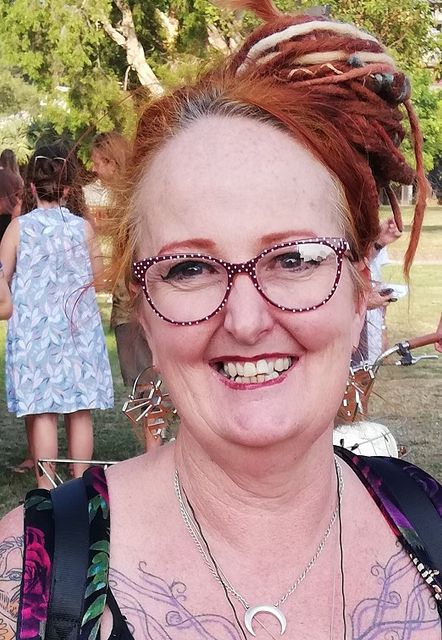 In Newcastle, 55-year-old retail worker Willow told the WSWS: “I’ve seen a huge change in my time. I’m an environmentalist and I've been a Greens member for a long time but I’ve become more dissatisfied with the parties out there and what they’re representing. The poor are not being represented. The rich are getting richer and richer, whilst the poor get more and more destitute.

“It’s definitely time for a change. My eldest daughter just had to go onto the job seeker program. She’s a single mum and was one of those picked randomly to be cut off from government assistance, so her parenting payments stopped. She has major mental health issues and now she’s expected to go out and look for all these jobs, which she’s not going to find in this city. I want my kids to have a better future than what they are heading for right now. I want to start fighting for that better future for them.”

In Melbourne, WSWS reporters spoke to Tom and Declan, who are studying psychology and accounting at Monash and RMIT universities. Tom said: “The problem does lie with the two-party system. There needs to be a complete overhaul. Labor and Liberal are the same party. Labor is gutless. They might say they stand for different things, but they never happen. It’s time for a real change.” 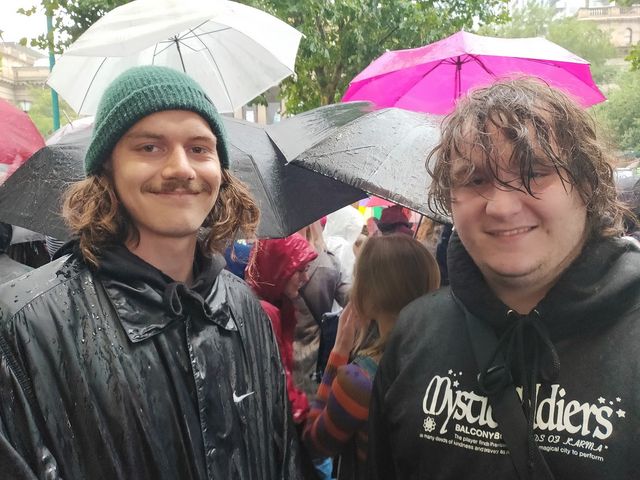 Asked about the government’s announcement this week of some funding for the bushfire crisis, Declan said, “It’s too late. It should have been months and months ago in preparation for this. [The government] cutting funding for the fire services is such a joke.” Tom added: “It’s negligence across the board and corporate interests. Morrison cut funding for food banks and now he’s trying to take credit for them.”