On Tuesday night, the Amalgamated Transit Union Local 689 announced a tentative agreement with the private bus contracting firm Transdev to end a strike by 130 bus drivers at the Cinder Bed Road bus in suburban Washington, D.C. If the deal is ratified, workers could return to work as soon as Friday.

The Transdev employees have been on strike since October 24 of last year against the cost-cutting practices of the corporation. Current Transdev workers are paid nearly $12 per hour less than their counterparts in the publicly-run Washington Metropolitan Area Transit Authority, despite operating the same buses and serving routes formerly served by WMATA. In addition, they are forced to pay $6,000 a year in health deductibles, while WMATA workers pay no deductibles, in addition to dealing with unsafe and grueling work conditions. 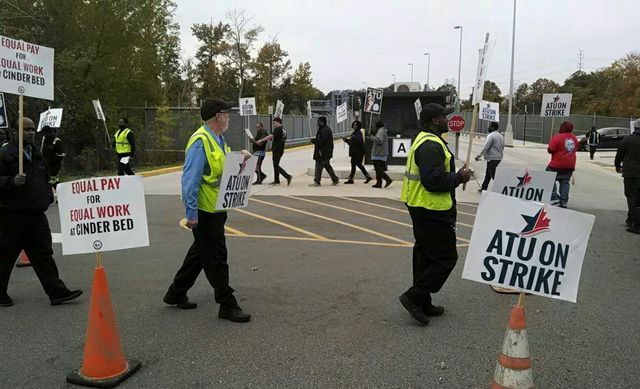 The union has not given workers any details about the contract offer. Instead, they will be made to attend a stage-managed all-day “listening session” today at the local headquarters, where local leaders will present the contract in the best possible light, after which they will be promptly made to ratify the contract as soon as possible, before workers have had a chance to study the entire agreement. Any vote rushed through under such conditions could only be a sellout.

In comments to WTOP News, the union claims that the offer will “[improve] health care and retirement plans” and provide “substantial wage increases.” However, ATU 689 president Raymond Jackson, Jr. declined to give specifics, claiming that the union “did not want to immediately share details of the deal so that the [sic] could first communicate those details to members.”

Throughout the nearly three-month struggle, the ATU has sought to isolate striking Transdev workers to a single picket in Northern Virginia, while keeping more than 8,000 public sector members at work. The ATU has combined this with toothless appeals to WMATA to terminate its contract with Transdev, which have fallen on deaf ears.

The ATU also called off a strike launched last month at the parallel Fairfax Connector line, which is also operated by Transdev, before they even reached a tentative agreement. Recent comments by workers under the bargaining updates on the ATU Local 1764’s social media account shows that Connector workers have yet to be paid for the four days they spent on strike last month.

While the ATU has worked to isolate the Transdev strikers from their counterparts at WMATA, transit workers on the public system face similar attacks on their standard of living and deteriorating service quality. Based upon the stipulations placed upon WMATA by the three jurisdictions it serves (Virginia, Washington, D.C., and Maryland), the transit system is required to keep its operating budget costs below a 3 percent yearly increase, which leads inevitably to cuts just to maintain regular operations.

On Monday, WMATA released a tentative budget for its planned extension of the Silver Line subway service from Washington, D.C. to Dulles International Airport in suburban Virginia. According to the Washington Post, the $60 million plan will be partially paid for by “[freeing] up money within its budget through one-time sales of excess properties and savings in staffing expenses,” i.e. laying off workers and selling off public assets to private interests.

In addition, local government officials overseeing WMATA are seeking to shift the costs of service to riders through fare increases, limiting bus routes and cutting services after hours. 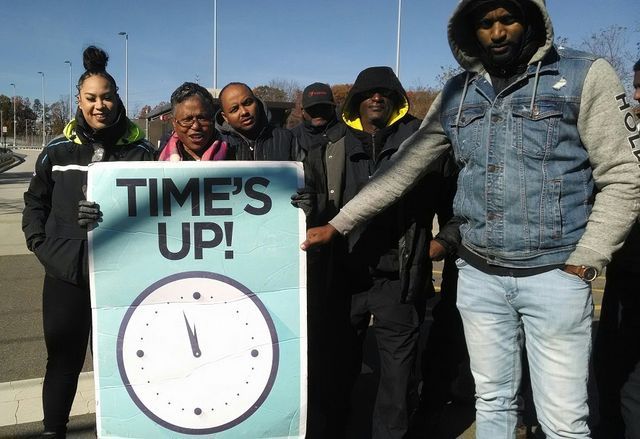 A contract signed between WMATA and the ATU last month covering the public system’s 8,000 public transit workers demonstrated the drive to cut costs. The contract allows WMATA to raise the cost of healthcare for retirees while delivering a 25 percent wage cut for newly hired cleaning staff.

Previously, WMATA general manager Paul J. Wiedefeld angered transit workers by violating the contract with ATU Local 689 in July 2018 when he hired out cleaning services to private companies. At the time, WMATA’s 8,000 workers voted by 94 percent to launch strike action, which the ATU ignored. This allowed Wiedefeld to continue contracting work out. Only three weeks later, he contracted out the Cinder BedRoad bus garage to Transdev. But under the current contract, Wiedefeld is hoping to save expenses by attacking WMATA workers directly.

The WMATA-ATU contract promises that once Transdev’s contract expires the transit system will hire in the striking Cinder Bed workers as employees of the public system. However, they will be forced to buy back any pension pay they received while at Transdev—essentially paying for their pensions twice—and must go through WMATA’s standard hiring process, meaning they are not guaranteed to be hired at all.

The treacherous policies of the ATU follow a well-worn pattern which the unions as a whole have long followed. The United Auto Workers union used similar tactics to isolate and betray the nationwide strike last year by 48,000 General Motors workers. The year before, the Teamsters union rammed through concessions at UPS, even though a majority voted against the tentative agreement.

This is bound up with the transformation, completed many decades ago, of the trade unions into adjuncts of management, whose financial and social interests are opposed to the workers they claim to represent. In New York City, for example, a recent contract offer promoted by the Transport Workers Union would give it a share of the Metropolitan Transportation Authority’s profits, in exchange for forcing workers to accept overtime.

In opposition to the sellout drive of the ATU, World Socialist Transit Workers Newsletter urges the formation of rank and file committees, independent of the union. Transdev workers must turn to their WMATA counterparts and other local transit systems to prepare for a general strike within the region.

Appeals should be made to the working class throughout the D.C.-area to support the fight to win decent pay and services, while the committees should fight to expand the struggle to other regions.