Australia: Bushfire survivors point to lack of funding for firefighters and recovery effort

Manyana and Sussex Inlet communities on the New South Wales South Coast—where the massive Currowan fire has ravaged more than 310,000 hectares of land—faced catastrophe on New Year’s Eve, but were narrowly spared by a change of wind. In nearby Lake Conjola, dozens of homes were destroyed and three people lost their lives.

World Socialist Web Site reporters spoke to residents about the impact of the fires.

Luke, who commutes daily from Wollongong to his job as a warehouse manager in Liverpool, south-western Sydney, had been staying in his family’s caravan just south of Sussex Inlet when the fires hit.

He said: “I’ve been coming down to Sussex all my life. In the 2001 and 1994 bushfires I got stuck down here, but I think this year was the worst we’ve ever seen. There’s just so many dead trees, leaves, grass—you name it. There’s no moisture at all.”

Luke praised the efforts of Rural Fire Service (RFS) volunteers: “What can you say? Words can’t explain what they’ve done. They’re putting their lives in jeopardy to help other people’s properties and to keep everyone safe. I think all the talk about the volunteers getting tax relief, or getting paid, is a “gimme.” It shouldn’t even need to be discussed.” 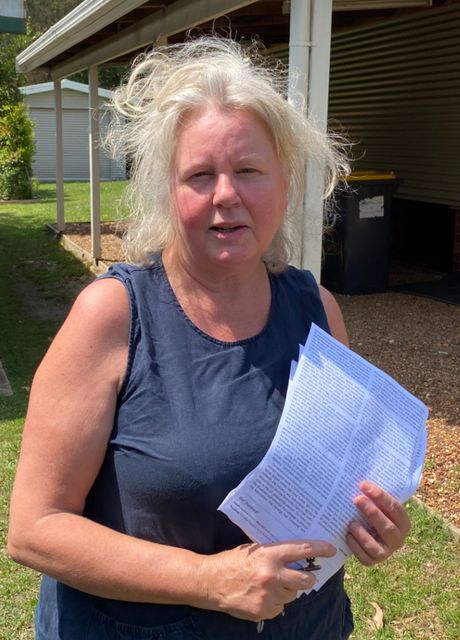 In Manyana, where bushfires forced many residents to evacuate, our reporters spoke to Jane, a former public servant who had recently been made redundant.

Jane said the fires were the result of “inaction on climate change for the last 30 or 40 years.

“The very wealthy don’t want anything to change. Governments are beholden to the elite. I’m really struggling to see how you change anything. You can do things on a little level, but I don’t know how we’re going to actually bring about the tremendous change that’s needed, within probably less than 10 years.

“I know Extinction Rebellion has tried to do things, but I think in lots of ways, they’re having an impact on the people that already knew what the problem was. The people you’ve got to attack are the people who control all the money in the world. They’ve got the money to fix it all. This is the fossil fuel industry, the banking industry, a massive structure high up above everything else that’s controlling it all. The wealthy control these organisations, like the UN, and the World Economic Forum, that’s on at the moment.

“This is the capitalist system isn’t it? Infinite growth. They can’t stop. What’s going to happen? Food shortages, all sorts of things. That’s if we don’t have some sort of nuclear catastrophe before that.” 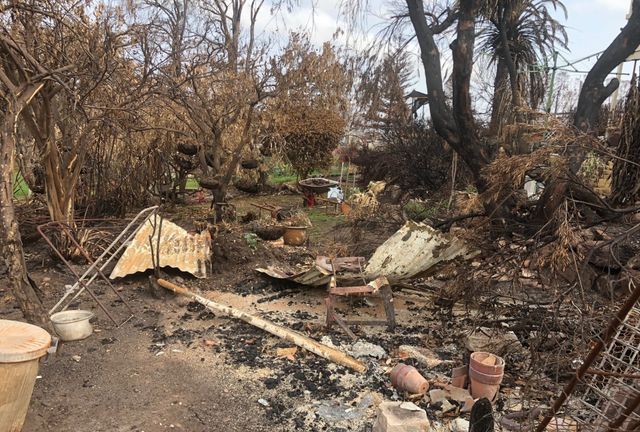 A fire-ravaged backyard at Lake Conjola

Glendra was not on the South Coast during the fires, but was visiting Sussex Inlet from Bullaburra, “just a few suburbs away” from the massive Gospers Mountain blaze. She was concerned that the generosity of ordinary people was being exploited to minimise the impact of decades of cuts to firefighting services.

Glendra said: “The donations going to the firefighters, I think people are doing that with good intent, thinking of the poor volunteers who have been fighting fires since September, who’ve given up their jobs and are here fighting for people’s homes and safety, as well as for animals and the environment. The fact is, when you donate to the RFS, that is a government department, basically, which means that your donation is going to the Liberal government and could be used as them saying ‘Oh aren’t we wonderful, we’ve put all this firefighting equipment in and all these helicopters.’

“Well they should have been doing that to begin with. They shouldn’t have cut the national parks funding by half either, and got rid of half the people that have been looking after the forests and the national parks for many, many years. They just put a broom through, get rid of all the people with the experience, and just keep a minimal staff and wonder why the place is burning.”

Northwest of Sydney, the Gospers Mountain fire has razed more than 512,000 hectares since it began in late October. On December 21, the fire reached the Blue Mountains town of Lithgow, where it destroyed dozens of homes. 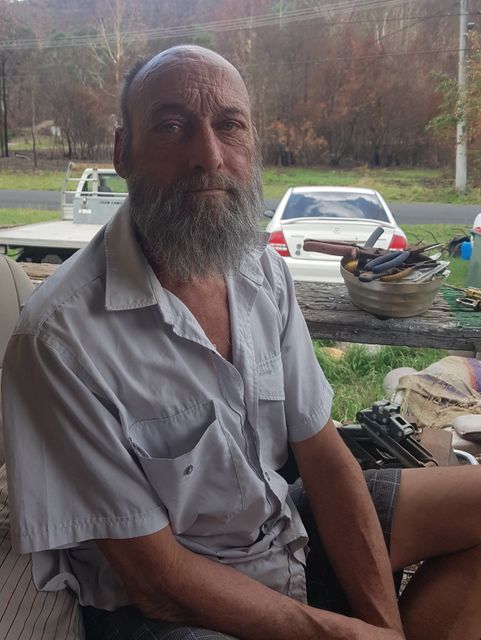 Boo, 60, is a motor mechanic, who has lived in Lithgow his entire life. He was full of praise for the way local residents had come together to deal with the crisis.

Boo said: “The community is outstanding. It wasn’t only the people I know who came to help me. Heaps of people have come to help me. It was humbling. The government’s different. You have to struggle to get anything from them.

Boo recalled one instance of help: “On the day of the fire, when it wasn’t burning so ferociously, I was trying to save what I had left. I had my thongs [flip flop sandals] on and ended up stepping on embers. I didn’t realise, but I got burnt. After everything was out, a lady down the road brought me some savlon cream and cotton socks. She rubbed the cream in.”

Boo was moved to tears while relating a story about the Rural Fire Service (RFS): “I was making a rocking horse, Chester, for my grandson, Hamish. Then, while the fires were on, one of the firies called me and said ‘Sorry Boo, we tried to save your house, but it’s gone. But we got your rocking horse out—we put it on the lawn. Hopefully it’ll be right.’ 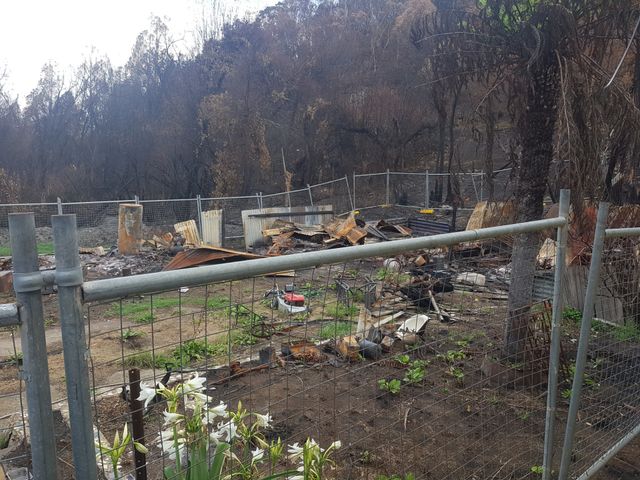 The remains of Boo‘s backyard in Lithgow

“They had kicked the door in to get the horse. They were thinking about my grandson’s toy. These guys are putting their lives on the line. For me. And everyone else involved.”

Dennis and Karen, in the small community of Clarence, where ten homes were lost to fire on December 21, spoke about the recovery process.

Dennis said: “Some people need a lot of help. Some people don’t know if they want to rebuild. We’re working with a couple of elderly people and helping them to rebuild their house, and they are fired up. They want to start reliving life. They’re going to be held up now with bureaucracy. There are rumours going around that some won’t be allowed to rebuild.

“It’s going to be slow. The council and the government have said they will clear the land and get rid of the old buildings. There is a lot of bureaucracy in that, and it may end up like another insulation disaster. Either that or the delays will be so significant that people will get sick of it and start clearing their own blocks. There is also a problem with asbestos.

“I’m not sure who’s got the staff or personnel to actually administer the process.”

Karen described many of those affected by the fires as “battlers”—people who were doing the best to look after their families. “A lot of them are not insured, or underinsured. If there is help out there, I would like to see that they receive it. Their whole life has been destroyed.”

Dennis added: “You see some place, and see a whole pile of junk that has burnt down. But it’s their junk, and every piece of that junk actually means something to them. There was a dream involved in every piece of that stuff. Now they have to start the clean-up process. A lot of that won’t happen. We still have properties around here that were badly affected by the 2013 fires that haven’t been cleaned up. 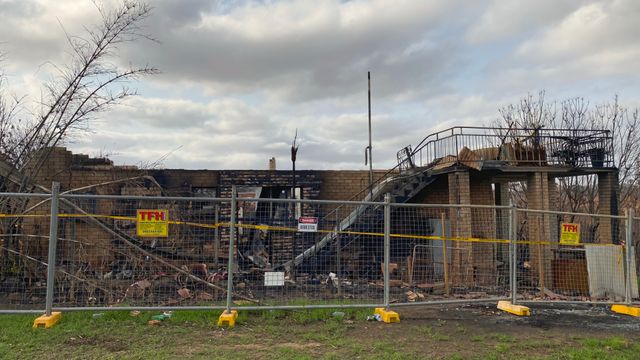 Burnt-out remains of a home in Lake Conjola

“The really big issue is that people don’t know how much it’s going to cost to rebuild, compared with what they are insured for. The latest codes have tripled the costs of a lot of components within houses. Windows are triple the cost of what they used to be. People may get their full insurance payout, but they won’t be able to rebuild what they had.”

Also in Clarence, a retired woman who preferred to remain anonymous, described the difficulty she was facing in trying to claim the paltry $1,000 rebate promised to fire affected residents.

She said: “I spent 55 minutes on the phone, and apparently Centrelink [the government agency responsible for distributing the rebate] hasn’t updated my residency, despite the fact that, since my husband died, I’ve had dealings with Centrelink many times [always at the same address]. I was told the payment may take 28 days to come through. If you are affected, you need the money now, not in 28 days.

“The issue for me is trees,” she continued. “The council said an arborist would come around and check the trees, and I haven’t seen one. The council and army will remove the trees impacting on the house, and nearby. I don’t know how many my neighbour is cutting down, but it’s costing him $30,000. I haven’t got that.”