Around 500 people attended a public meeting in London on Tuesday night, headlined “Press Freedom and the Case of Julian Assange.”

The meeting was organised by Don’t Extradite Assange (DEA), the official WikiLeaks-endorsed campaign group led by the founder of the pseudo-left Counterfire group, John Rees, a leading figure in the Stop the War Coalition. 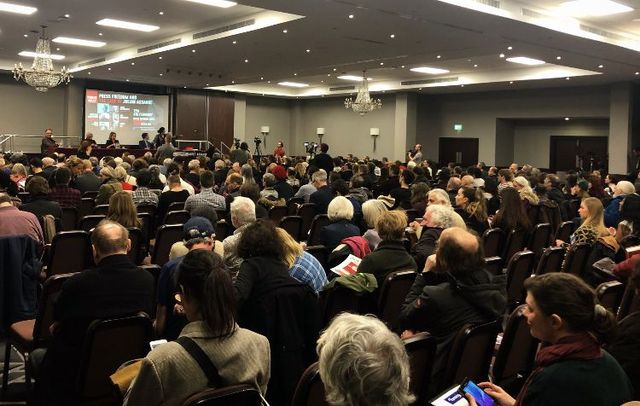 The meeting heard speeches from UN Rapporteur on Torture Nils Melzer, Assange’s lawyer Jennifer Robinson, and WikiLeaks editor-in-chief Kristinn Hrafnsson. They outlined the grave threat to press freedom and democratic rights posed by Assange’s possible extradition to the United States under the Espionage Act for exposing war crimes in Iraq and Afghanistan.

However, it would be a serious political mistake to judge Tuesday’s meeting based on limited criteria such as the number of attendees or the rigorous and informative reports one has come to expect from Assange’s legal team, and from Melzer and Hrafnsson.

This was a meeting with a definite political agenda. Billed as one that would “define support for Julian Assange,” the DEA’s aim is to rehabilitate the Labour Party and the trade unions, its “left” representatives in particular, and to corral the movement in defence of Assange under their control.

For months, Rees and his Pabloite ally, Tariq Ali, have fended off widespread criticism of the refusal of Labour Party leader Jeremy Corbyn and his key allies in the Parliamentary Labour Party (PLP) and the trade unions to come to Assange’s defence. At the end of 2019, at a public meeting in London, Ali claimed a Corbyn victory was Assange’s “only hope” of freedom and that nothing should be done to publicly challenge Corbyn’s record of silence that might open him to attack from the right and risk defeat in the December 12 general election.

On April 11, 2019, after Assange was arrested at London’s Ecuadorian Embassy, Corbyn issued a single tweet opposing his extradition to the US, with Shadow Home Secretary Diane Abbott speaking out in parliament. But within 48 hours they had staged a public backdown after attacks from the Blairite warmongers who dominate the PLP. Corbyn issued a televised statement that “nobody is above the law,” insisting Assange must be sent to Sweden over state-manufactured “rape” allegations in the event of an extradition request and that his fate was “a matter for the courts.”

From that day, the words “Julian Assange” did not pass their lips—not even after Espionage Act charges were brought against him with a prison term of 175 years. Even as Melzer warned that Assange was suffering the effects of “prolonged psychological torture” and was at risk of death inside Belmarsh Prison, Corbyn and his backers kept their mouths shut.

Their shameful complicity reached a climax during the general election campaign, with Corbyn and his allies defying calls that they campaign for Assange’s freedom. Such a stance, linked to the fight against war, state repression and austerity, would undoubtedly have won support in the working class, especially among young people, posing a direct political struggle against the Blairites. This Corbyn and his backers opposed, insisting on “party unity” at all costs.

In the wake of Labour’s crushing defeat, its nominal “left” leaders are preparing their return to the comfort of the backbenches. There, token statements can be issued freely and with no binding effect. 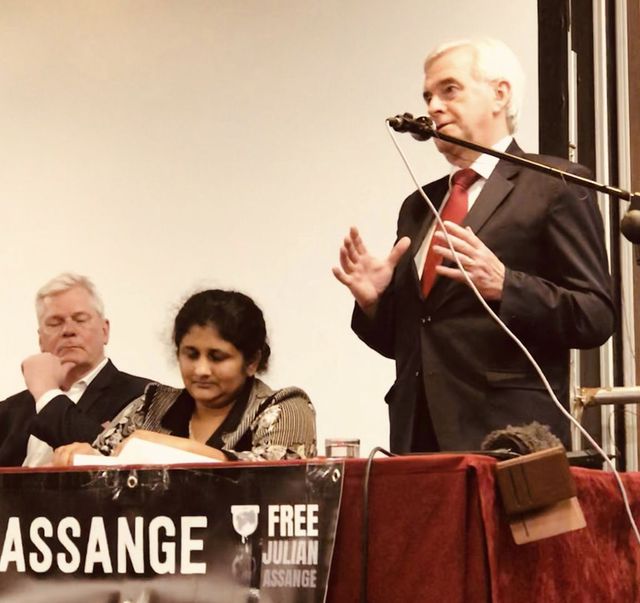 John McDonnell speaking at the meeting

It was in this spirit that Labour’s Shadow Chancellor John McDonnell was billed as the keynote speaker at Tuesday’s event. A press release from the DEA on Monday was headlined, “John McDonnell to lead public rally in support of Julian Assange.” He would be joined by Labour’s Shadow Secretary of State Richard Burgon and national executive member of the National Union of Journalists (NUJ) Tim Dawson.

McDonnell’s star billing was a form of political protection for Corbyn, who has been discredited for his silence on Assange (amongst many other things).

It was no easy task to promote McDonnell as a keynote speaker on Assange. For 10 years, Corbyn’s closest ally has said not a word in Assange’s defence. In stark contrast, his defence of unindicted war criminals in his own party has been fulsome.

Just three months ago, he participated in an interview for GQ magazine with Alastair Campbell, former chief advisor to Tony Blair. Campbell asked, “Is Tony Blair a war criminal?” to which McDonnell replied immediately, “No! No!” Asked whether he supported Campbell’s recent expulsion from the party for voting for the Liberal Democrats, McDonnell answered, “No. … Come back, Alastair, all is forgiven!”—this of the man who helped stampede Britain into the 2003 illegal invasion and occupation of Iraq.

Unable to point to a single instance in which he had personally acted in Assange’s defence, McDonnell cited the establishment of a National Union of Journalists parliamentary group in defence of press freedom. But he was equally incapable of pointing to a single action it had taken to defend WikiLeaks or Assange.

To applause, McDonnell pledged, “We will do everything possible to support this campaign and secure [Assange’s] release,” but the only concrete action promised was to arrange a prison visit with Assange via Home Secretary Priti Patel.

The earlier speeches by Dawson and Burgon were of a similar character.

Dawson cited comments by Daily Express editor Gary Jones that he was “not really comfortable describing Assange as a journalist.” This expressed “quite a commonly held unease among other members of my profession,” he said. Failing to defend Assange against this smear, Dawson claimed, “That concern is completely irrelevant.” This is a lie. The US Department of Justice indictment against Assange asserts he is not a journalist but a “hacker” and is therefore not entitled to First Amendment protections.

Dawson insisted, “We should be protesting as loudly as we are able.” But his union has done nothing to mobilise media workers in Assange’s defence, other than pass a pro forma resolution by its national executive that was posted on its website.

Burgon’s address was an exercise in political evasion. As Shadow Justice Secretary, he has a particular responsibility to defend Assange. Had Labour won the election, he could have refused to accept the US extradition warrant, but that would never have happened. Burgon has done nothing of substance to defend Assange. Of the 14,500 Twitter posts he has dashed off since 2012, just two mentioned the WikiLeaks founder.

And, like McDonnell, he portrayed UK government actions as “kowtowing” to the United States, concealing the interests of British imperialism in silencing Assange’s exposure of war crimes, illegal mass surveillance and global diplomatic intrigue.

If Corbyn, McDonnell and the unions had made any serious attempt to mobilise support for Assange, Tuesday’s meeting would have been attended by thousands.

Their hostility to mobilising mass support for Assange’s freedom is not simply, or even primarily, a product of electoral opportunism. It is rooted in their defence of imperialism. Both of Labour’s general election manifestos adopted under Corbyn failed to raise the defence of the world’s most famous political prisoner. But they did commit to the Trident nuclear weapons programme and GDP spending targets for NATO.

As for pseudo-left outfits such as Counterfire, and lifelong opportunists such as Ali, they are more concerned with protecting Corbyn’s reputation than with defending Assange. From 2012 until April 2019, Rees’s Counterfire wrote nothing on Assange, after a large section of its membership demanded he be sent to Sweden.

The extent to which Tuesday night’s meeting was politically controlled on behalf of Corbyn’s office was indicated by the presence of his Executive Director of Strategy and Communications, Seamus Milne, hovering in the doorway.

Ali’s was the final contribution of the night. It expressed the political cynicism and complacency of pseudo-left parties of the affluent middle class, at home in the corridors of power and hostile to the fight against imperialism and the state.

“We have to do everything we can,” Ali stated, “in parliament, outside parliament, in the UN, wherever, to make this case something.”

“We might not win,” he told the audience, but if the case was lost it would still serve as a reminder “that people will fight against injustice and chicanery of this sort.”

Ali concluded by offering the hope that “the British judge trying Julian Assange will be the wrong sort of judge for the establishment. We know it isn’t. I’m just saying that there are a few judges who are capable of doing that in this country. Hopefully as the case moves upwards to superior courts, we will find some judges who are prepared just to be decent.”

The Socialist Equality Party rejects the political perspective being advanced by the DEA. Assange’s freedom will not be secured under the leadership of a handful of pseudo-left defenders of the Labour and trade union bureaucracy. On the eve of Assange’s extradition hearing and with a growing resurgence of the international class struggle, our turn is to the independent political mobilisation of the working class.