Staff, students and freedom of expression at Nashville art school threatened in takeover by religious university

Watkins College of Art, a Nashville, Tennessee art school long known for its artistic freedom, is being absorbed by Belmont University, notorious for its practice of hiring only “Christian” instructors and where some art work and practices are restricted.

As Artnet News, which first wrote about the story, observed, “Students have been told by Watkins faculty and Belmont officials that their freedom of expression would be somewhat restricted at the Christian school where filmmakers must make PG [Parental Guidance rating—i.e., innocuous] movies and artists [are] not permitted to draw from nude figures to study the human form.”

The art college was founded as the Watkins Institute in 1885 at the behest of Samuel Watkins (1794-1880). Orphaned at age four and with no formal education, Watkins became a “self-made entrepreneur and philanthropist.” Having first made a fortune as a master builder, after the Civil War, he engaged in banking, manufacturing and other pursuits. In his will, Watkins left $100,000 and Nashville property to teach the “business of life” to those in need.

The decision by the Watkins board of directors to allow the school to be absorbed by the much larger, richer and very conservative Belmont was announced late last month. A January 29 meeting organized for Watkins students and staff with Watkins CEO Dr. Joseph Kline and Belmont Provost Dr. Thomas Burns did little to tamp down the anger and distress a large number of the students feel, sentiments well justified.

At the meeting, Burns laid down the law to the assembled on who would be teaching them, along with the obligation of every Watkins instructor and staff member to make a written statement of Christian faith. 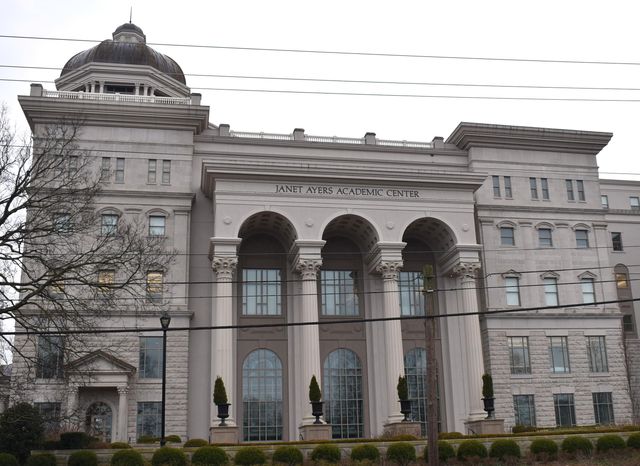 The largest building on campus (last on right) has the name of the wife of a Nashville banking giant deeply carved at the top. The pair gave the school $15 million

A video of the meeting was posted online by Artnet News. Two Belmont instructors have confirmed they were required to sign statements of their Christian faith to be hired.

Quinn Dukes, a 2007 alumna of Watkins College, who organized an online petition (“Open Letter to the President of Watkins College of Art and Board of Directors”) against the merger, told Artnet News, “There is rage and there is fear … Students and faculty are losing both a history and a school.”

In signing Dukes’ “Open Letter,” Amanda Sledge commented: “The lack of transparency coupled with the fact that real estate deals are already discussed as per the sale of Watkins is misleading, corrupt, and disgusting. Pair this with the fact that you are merging with a CHRISTIAN university that will clearly affect the quality of art education as well as the open-mindedness and spirit that Watkins upheld. Due to the ‘sexual nature’ of much of my photographic work, I highly doubt I would have received a comparable education, much less a evocative exploration of self. Shame on you.”

The open letter currently has more than 4,000 signatures, and the number is growing each day.

At the meeting, a Watkins student explained to the officials, “I would like to present you with this list of wants, needs and concerns to take back with you. These were written with a group of Fine Arts students and faculty.”

“We want a written, legally binding document regarding honoring Watkins tuition. We want to be exempt from student requirements that are different from Watkins such as being required to buy a meal plan …

“We request to have a different transition liaison than Dr. Kline. We’d like it to be a committee of faculty and staff from Watkins.

“For the endowment fund that will be generated by the sale of our building, we want to have student and faculty representatives overseeing how scholarships are awarded.”

Merger critics also call for severance packages for Watkins staff if they are not given suitable jobs by Belmont.

On February 4, several dozen students first staged a sit-in in the administration hallway at Watkins and then protested outside the college with signs reading “Save Watkins.” The students demanded to see written agreements related to guarantees from the Christian school that they would be enrolled in the next school year, according to the Tennessean .

Kline has defended the merger saying it “secures the legacy and mission of Watkins for generations to come.” Kline’s optimistic statement aside, the future of Watkins teachers and staff is completely unsettled.

“We have been at meetings where they say one thing at the beginning of the meeting and half way through that changes. That is kind of what we are looking at; nothing is written down,” one member of the Watkins staff said. 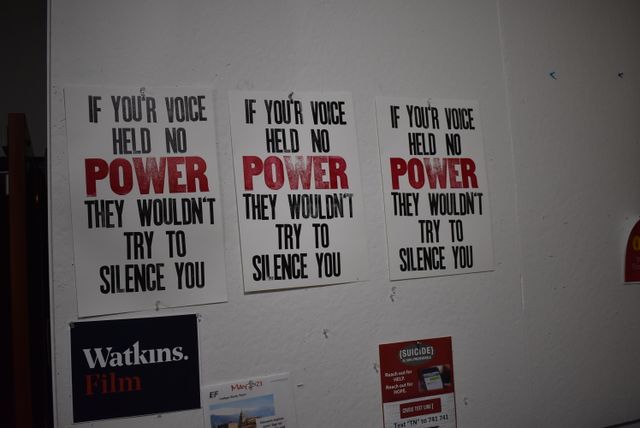 Posters that would never make it on the walls at Belmont

On February 3, Kline shared a statement from Belmont promising, as “a special consideration,” that Watkins’ non-Christian faculty would have the potential to be hired on at the school, “because we recognize current Watkins employees could not control nor anticipate merging with a faith-based institution.” Students and staff remain skeptical.

Some transfers who had taken a course in comparative religion—completely voluntary in most colleges and universities—might avoid one of the mandated Bible courses.

“It all just kind of smelled fishy to me from the get-go,” a film student said January 29 after the meeting. “I think the entire deal has been relatively kept under wraps. There has not been a lot of honesty and openness with students….They said they have run out of money but we know that is not the case. It doesn’t add up. Dr J [Joseph Kline] is not giving us solid answers on any of that.”

Students also complained that Kline had been assured a position at Belmont, but Watkins staff are not assured jobs or severance packages.

“I think a lot of the concern of the students is the religious affiliation of the school,” another Watkins student told the WSWS. “The professors here would have to profess in writing that they are of the Christian faith or Belmont won’t even consider hiring them. And it is a big concern among the [Watkins] student body which has a big percentage of LGBTQ students here. It’s like, are they going to be forced to take religious classes or will they be able to make the work they want to make without any censorship or restriction?” 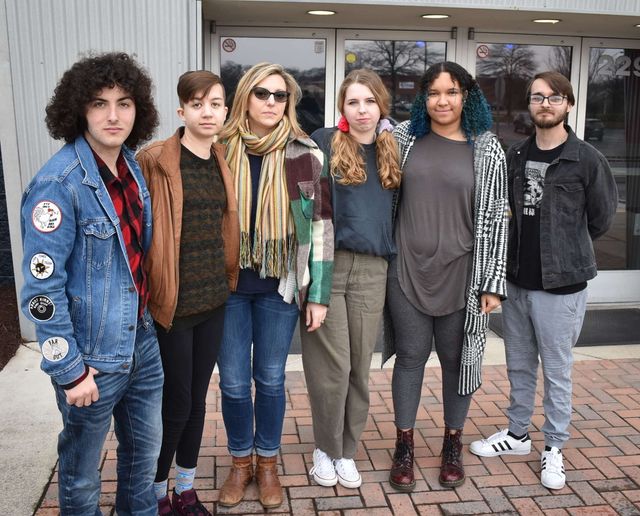 LGBTQ students have a right to be concerned. It was not until 2011 that sexual orientation was even added to the school’s non-discrimination policy. But that only followed the 2010 furor over the loss of a job by soccer coach Lisa Howell, a lesbian, who acknowledged that she and her partner were raising three children.

“For me, personally, it is very upsetting because I went to two private Christian high schools—and I do personally call myself a Christian—but those two institutions were very toxic and not at all what they were called,” one Watkins student told the WSWS. The fate of the Watkins faculty was “one of the things that mangled our hearts strings … because they are what makes the school what it is, and what makes this such a special and awesome place to go to school.”

“Freedom of speech and expression is a question for all of us,” another Watkins art student agreed. “They have clothed models that wear underwear and stuff. It’s like you can’t even draw a nude person. What am I supposed to do with my art if I can’t even use nude people? It is a real concern. That is censorship right there.”

“They do have a lot of rules [at Belmont] about the content in their films that are not present at Watkins,” a film student observed. “At Watkins I’m pretty much open to say and do what I want in my films. At Belmont, the restrictions that would be placed on my films are pretty much based on religion. That shouldn’t be on me to submit myself to the rules of a religion that I don’t personally follow.”

Artnet News points out that Watkins “is the fourth Tennessee art school to close in the last three years. Others include the Memphis College of Art and the Art Institute of Tennessee, Nashville.”

The general atmosphere and prevailing atmosphere at Belmont University can be gauged by the institution’s hiring of Alberto Gonzales, United States Attorney General under George W. Bush (2005-2007), as the Dean of the Law School. Gonzales had a long association with Bush, serving as the then Texas governor’s general counsel, where he was in charge of reviewing all clemency requests from death row inmates—all but one of which were rejected. Gonzales was forced to resign as Attorney General in 2007 in a scandal surrounding the purge of nine US attorneys in 2006 and the expansion of domestic spying programs under the Bush administration. He was broadly associated with the illegal expansion of presidential powers, the authorization of torture and other atrocities carried out under Bush and Dick Cheney.

As the WSWS reported in 2005: “Gonzales requested the writing of the now-infamous memo signed by then Assistant Attorney General Jay Bybee, which argued for a very narrow definition of torture under federal law to allow the broadest range of techniques. The memo also argued that the president has the constitutional authority as commander-in-chief to authorize the torture of prisoners as part of the ‘war on terrorism.’”