On Thursday, at approximately 7:30 a.m., 26-year-old Eric Diaz-Cruz was shot in the face by an Immigration and Customs Enforcement (ICE) officer in a working-class neighborhood of Brooklyn in New York City. The shooting occurred as the federal agents were seeking to detain Gaspar Avendano-Hernandez, a construction worker with undocumented status who was on his way to work.

Avi Zlita, a Syrian immigrant who witnessed the incident, told AM New York Metro that ICE officers crashed their Ford Mustang, hitting Zlita’s parked car from behind. Immediately afterwards, the officers ran out of their car, without identifying themselves or displaying any documentation, to apprehend Avendano-Hernandez, who was about to enter an Uber parked outside of his home. Avendano-Hernandez resisted, getting tasered and pepper-sprayed multiple times in the process.

While Avendano-Hernandez was getting assaulted by ICE, Diaz-Cruz, his girlfriend’s son, came to his defense and punched an officer, for which he was promptly shot. The bullet tore through Diaz-Cruz’s hand and went into his face.

Kevin Yanez-Cruz, Diaz-Cruz’s 19-year-old brother, later recalled to the New York Daily News: “[The ICE agent] didn’t even think twice. He just shot him. [Eric] had no weapons in his hand. Nothing.”

Avendano-Hernandez was able to temporarily escape and barricaded himself inside of his home. New York Police Department (NYPD) officers were then called in to apprehend him. Avendano-Hernandez is currently under custody in the 62nd Precinct. It is unknown whether he will be handed over to ICE. Diaz-Cruz is currently recovering at Maimonides Medical Center in Brooklyn. 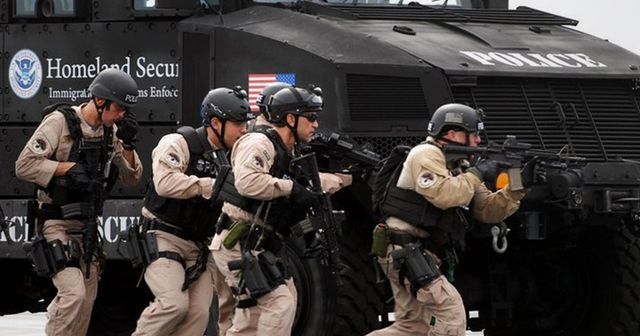 Judy, one the residents at the rally, told the WSWS, “The suffering that’s happening to my community and friends, this is inhumane, its a horror. This is a nightmare which is destroying lives. I visit detainees in ICE custody on the weekends, one of the detainees there is my friend. Trump is a sick, sick man, but I don’t trust any of the politicians. This is a frightening world.”

ICE responded to the shooting with a public statement, writing that the justification for apprehending Avendano-Hernandez was his undocumented status, a 2011 assault conviction (no further details given) and possession of a “forged instrument” on February 3. The “forged instrument” was a fake Connecticut license plate. They had “attempted to lodge an immigration detainer” against Avendano-Hernandez and take him into custody while he was arrested for his fake license plate, but because he was released, this “forced ICE officers to locate him on the streets of New York.”

The shooting of Diaz-Cruz comes amid an intensifying struggle between New York City and the Trump administration over the former’s “sanctuary city” policies. A “sanctuary city” is essentially a jurisdiction where police are prohibited from asking about an individual’s immigration status. Under US law, being undocumented is not a criminal offense but a civil violation. Immigrants have rights under the Constitution, such as due process, which prevents authorities from detaining anyone who has not committed a crime. In most areas of the United States this fundamental right is constantly violated, with immigrants being held in detention till they are turned over to ICE, but in “sanctuary cities” there is a certain level of protection offered to immigrants.

For this and a recently passed state bill which prevents federal officials from accessing Department of Motor Vehicle records without a court order, the Trump administration has stepped up sanctions against New York City. On February 5, it blocked New Yorkers from enrolling in the Trusted Traveler Program, which has the effect of making air travel more difficult and costly for the city’s residents.

However, this does not mean that cooperation does not exist between New York, other “sanctuary cities” and the federal government for detaining immigrants. In the case of Avendano-Hernandez, ICE could only have gotten the information that he had a forged license plate from New York City authorities or officials. In a report released by the city’s comptroller office, from 2017 to 2019, deportations climbed 150 percent.

The violence inflicted on Eric Diaz-Cruz and Gaspar Avendano-Hernandez by federal agents is not an aberration but a norm within the activities of ICE. According to the Immigrant Defense Project, there have been many reports of ICE agents using violent force to conduct detentions, such as “slamming family members against walls, dragging individuals from cars, and even pulling guns on people leaving court.” A common practice within ICE is the impersonation of police officers or potential employers in order to detain immigrants. The actions of ICE agents are so blatantly criminal that many bystanders have dialed the emergency line 911 to report a kidnapping.

Once detained by ICE and other immigration enforcement agencies, the conditions faced by detainees are nothing short of torturous. On February 5, a US citizen detained by Border Patrol agents in south Texas was admitted to the hospital within three hours of his detainment and pronounced dead shortly after. Along the US-Mexico border, detained immigrant workers and their children are housed in modern day concentration camps where numerous cases of death, sexual assault and torture have been reported.

The demonization and brutalization of immigrants is made possible through the bipartisan support of the Republicans and Democrats in Congress, who recently passed a record $738 billion military budget of which a significant portion will be used to fund the US-Mexico border wall.

The shooting of Eric Diaz-Cruz in New York City is a part of a broader trend around the world with the breakdown of capitalism and the development of fascistic forms of rule. While immigrants are being assaulted in the streets by federal agents in the United States, Muslims are being demonized in India, fascist groups are carrying out terrorist attacks in Brazil, and state leaders in Germany are embracing fascism.