Perhaps the most memorable parts of her speech were the allusions to Monte Scott, a thirteen-year-old from Michigan who filled the pot holes in his street in Muskegon Heights on his own with “a shovel and a bucket of dirt.” These allusions were a self-serving reference to the recently announced plans to address her gubernatorial campaign promise to “fix the damn roads” with a regressive fuel tax. 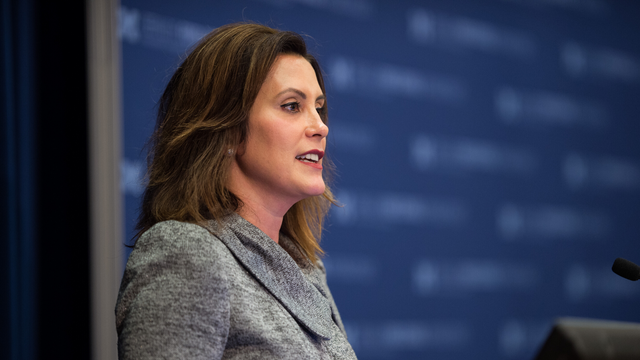 To begin with, Whitmer avoided any direct attack on the ultra-right trajectory of the Trump administration, declaring she would not take up the remarks of President Trump before the joint session of Congress, nor his policies, instead focusing on “what Democrats are doing.”

Like the Democrats’ right-wing impeachment trial, Whitmer’s speech avoided any mention of the numerous crimes of the Trump administration against the working class: the detention of immigrants and separation of families at the Mexican border, the unconstitutional re-appropriation of funds to pay for a border wall, drastic cuts to social programs which will devastate workers, or the promotion of fascism at campaign rallies and through presidential appointments and pardons. Nor did she mention the mounting threat of imperialist war, or Trump’s assassination of Iranian General Qassem Suleimani, which brought the Middle East to the brink of an explosion.

In fact, Whitmer only mentioned the impeachment trial in passing at the conclusion of her speech, instead focusing on two tasks: promoting Democratic Party initiatives as though they would help the working class and pleading with workers and young people to stay engaged with bourgeois politics.

The hypocrisy of Whitmer’s assertion that Democrats want “everyone’s vote counted,” the day after the Iowa caucus, was only matched by her attempt to paint the activity of the Democratic Party as progressive.

Whitmer touted the Affordable Care Act (ACA) as a legislative victory that has been continued at the state level by Democrats like Kansas Governor Laura Kelly and New Mexico Governor Michelle Lujan Grisham. “It’s pretty simple. Democrats are trying to make your health care better, Republicans in Washington are trying to take it away,” she said.

The ACA has not made health care better, though. Instead, through cost cutting initiatives that have increased fatalities, “Obamacare” has helped ensure profits for major health insurance companies like Blue Cross Blue Shield of Michigan, where Whitmer’s father was president and CEO.

Whitmer demagogically appealed to workers struggling to make ends meet while Wall Street rakes in record profits. In attempting to explain the vast social inequality weighing down on workers, Whitmer could only criticize the Trump tax cuts as unnecessary, not mentioning the role of the Obama administration in overseeing the largest transfer of wealth from the poor to the rich in history as part of the bailout of Wall Street after the 2008 financial meltdown.

Other Democratic initiatives highlighted by Whitmer include House bills to increase the minimum wage to $15 an hour—a paltry sum which falls far short of a living wage—and to grant drug price negotiating power to the Medicare program, bills which were passed only for show, with full knowledge that they would be blocked by the Republican-controlled Senate.

Democrats in Pennsylvania and Michigan are “expanding the right to overtime pay,” Whitmer claimed. As autoworkers in Michigan know full well, people work overtime because their wages are too low, and “overtime pay” means nothing when one is forced to work multiple part-time jobs.

It is noteworthy that three of the state-level Democratic initiatives of which Whitmer boasted were educational reforms in states where teachers either have gone out on strike or otherwise come into sharp conflict with their school districts, governments or unions. “Nevada Gov. Steve Sisolak and North Carolina Governor Roy Cooper are working to give hardworking teachers a raise… In Colorado, Governor Jared Polis has enacted free all-day kindergarten.”

It is not from the beneficence of these governors or the Democratic Party that these initiatives have arisen. Rather, these half-measures are the response of the ruling class to the militant wave of teacher strikes and other labor actions.

In Nevada, where public-sector strikes are illegal, teachers of the Clark County School District, which covers Las Vegas, were outraged by the school district failing to honor a contractual agreement for raises after completion of professional development. A school district meeting was abruptly dismissed for “security concerns” last fall after teachers began expressing their frustration. Despite the militancy of the teachers, the Clark County Education Association stonewalled teachers and refused to even say whether or not they would pay out strike benefits in the event of a strike.

In North Carolina, twenty thousand teachers rallied in Raleigh in May 2018 to demand better pay and working conditions. The North Carolina Education Association responded by urging teachers to “remember in November” and vote for the Democratic Party.

In Colorado, over 3,000 Denver teachers went on strike in late 2018 and into 2019, only to be sold out by the Denver Classroom Teachers Association. The contract, which was reviewed and signed within a half hour, addressed none of the demands of the teachers for smaller class sizes, tenure rights, school funding or putting an end to the expansion of charter schools.

Many of the teachers’ strikes across the United States and internationally since 2018 have developed in opposition to the unions, which then act swiftly to bring the teachers back in line. This follows a pattern that extends across industries and national borders, which terrifies the capitalist class for which Whitmer speaks.

When Whitmer said, “We and all Americans might be weary of today’s politics, but we must stay engaged,” she was giving expression to a profound fear of the capitalist class that the class struggle will break free of the confines of bourgeois politics.