Australia’s Socialist Alternative recently published a rare comment on the US-led vendetta against WikiLeaks founder Julian Assange. Having maintained a determined silence on his case for years, the pseudo-left organisation is now attempting to cover its tracks ahead of the extradition trial that begins on February 24 in London and threatens to see Assange railroaded into a life sentence in the American prison system.

Published in the December edition of Socialist Alternative’s newspaper Red Flag, “The betrayal of Julian Assange,” by its editor Ben Hillier, is a crude attempt to cover up the organisation’s own role in the “betrayal” of the WikiLeaks publisher. 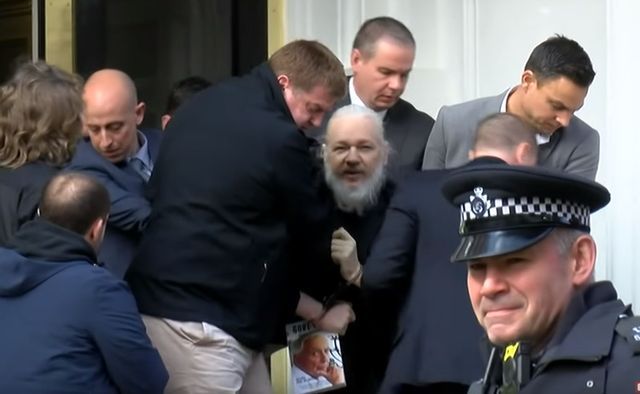 Julian Assange being dragged out of the Ecuadorean embassy in London, April 2019

Several formally correct points are raised in the piece. “During his years holed up in Ecuador’s embassy in London—in effect a political prisoner—Assange warned that the United States was hunting him down,” Hillier acknowledged.

“He was derided as an egomaniac and a rapist who was trying to avoid being investigated in Sweden over accusations of sexual assault. (In fact, he offered all assistance to prosecutors; he just demanded a guarantee that he would not be extradited to the US)… Pretty much everything Assange claimed has now come to pass.”

The article then detailed the sealed indictment on Espionage Act charges, the jailing of Chelsea Manning, Assange’s arrest in the Ecuadorian embassy and his imprisonment in London’s maximum security Belmarsh Prison.

Developed around an interview with WikiLeaks’ editor Kristinn Hrafnsson, the Red Flag article raised the question, “Have the liberal media begun to change their tune? Are they offering more support now that it is clear for all to see what is happening?” After quoting Hrafnsson’s reference to the media’s self-interest on the issue, Hillier added: “So even now, it’s not really about Julian Assange. It’s that even the pro-capitalist press can see the precedents that are being set and worry that they might in the future be caught up in the dragnet if they cross the line.”

From start to finish, this represents the politics of opportunism and hypocrisy. The pseudo-left in Australia, like their international counterparts, washed their hands of Assange in 2011 and 2012. The frame-up Swedish sexual assault allegations provided the pretext for the betrayal of the journalist and publisher, who US imperialism put in the crosshairs after WikiLeaks published numerous exposes, including the “Collateral Murder” video documenting war crimes in Iraq, the Iraq and Afghanistan war logs, and the diplomatic cable release that detailed the intrigues and provocations of US State Department personnel around the world.

Contradicting Socialist Alternative’s apparent recent discovery that Assange was right all along to have rejected the allegations from Sweden as nothing but a politically-driven frame-up aimed at railroading him to an American high-security prison, Ben Hillier wrote in August 2012: “Assange is wanted in Sweden for questioning over rape allegations. Those allegations should not be dismissed, as some of Assange’s defenders have done out of hand. He should face questioning and be held to account if transpires that he committed such an offence. [sic]”

In other words, Socialist Alternative lent political support to the bogus Swedish allegations right at the moment when these took centre stage in Washington’s vendetta against the WikiLeaks publisher.

Hillier’s 2012 demand that Assange “face questioning” and “be held to account” over the allegations was published just a fortnight after the Australian Broadcasting Corporation (ABC) “Four Corners” current affairs program broadcast a devastating exposure of the Swedish case.

Investigative journalist Andrew Fowler detailed the chronology of the false allegations, the improper actions of police and prosecutors in Sweden, and the connection of all this with the US state’s preparation of conspiracy and espionage charges. Swedish authorities finally abandoned its investigation into the allegations in November 2019, admitting there was “insufficient evidence” to proceed.

Socialist Alternative’s long-standing evasion of the evidence of Assange’s innocence partly reflected the pseudo-left organisation’s sensitivity to the middle class feminist politics of its membership and supporters, including the anti-democratic precept that all sexual assault accusations against women must be “believed” regardless of evidence.

More fundamentally, however, the organisation’s position was bound up with its pro-imperialist lurch to the right in 2011–2012, when it hailed the Obama administration’s regime change operation in Syria.

In August 2012, the same month that Hillier demanded that Assange submit to Swedish questioning, leading Socialist Alternative member Corey Oakley declared that “knee-jerk anti-imperialism” was a thing of the past, and that any emphasis on the “imperialist threat” to Syria was “profoundly mistaken.” Oakley is currently the secretary of the Victorian Socialists electoral front that Socialist Alternative formed with the organisation Socialist Alliance.

Socialist Alternative falsely presented the armed campaign to oust the government of Bashar Assad as a popular “revolution”—covering up the central role being played by Islamic fundamentalist forces being financed and armed by Saudi Arabia, the Gulf States, and via these countries, the United States and its intelligence agencies. The Australian pseudo-left adamantly defended the collaboration of anti-government Syrian militias with the US Central Intelligence Agency (CIA).

This political line resulted in numerous pro-imperialist statements that were marked by increasing recklessness and depravity.

Military advances in 2014 and 2015 by the ultra-reactionary Islamic State (ISIS) were hailed in gushing articles published in Red Flag. In July 2014, for example, Socialist Alternative celebrated “Sunni rebels, led by the Islamic State in Iraq and Syria” for dismantling border posts between Syria and Iraq.

“The rebels now control an enormous swath of territory stretching from the outskirts of Aleppo in Syria to just west of the Iraqi capital, Baghdad,” Corey Oakley wrote. “Rebels have taken control of strategically crucial cities and towns on, over or near the borders of both Jordan and Saudi Arabia, raising fevered speculation about whether they too will succumb to the tide of revolt. The fallout from these events is extraordinary.”

In December 2015, a Red Flag article hailed the shooting-down of a Russian jet by the Turkish military near the border with Syria as “a small victory for humanity.” The article’s author, Michael Karadjis—a member of Socialist Alliance—had previously defended a “rebel” commander in Syria who was shown videotape eating the organs from a corpse on the grounds that his actions were only “minor cannibalism.”

The promotion of pro-imperialist politics went hand-in-hand with a determined silence on the US government’s drive to destroy both WikiLeaks and Assange. This is why the pseudo-left in Australia and internationally said and did nothing about the relentless drive to imprison Assange while he courageously held out within the Ecuadorian embassy in London and continued his work with WikiLeaks.

In election campaigns waged by Victorian Socialists, in both the state ballot held November 2018 and the federal poll last May, none of the organisation’s candidates issued a statement about the enormous assault on democratic rights that the vendetta against Assange represents. Nor did any of its distributed printed materials—including leaflets and prominent posters distributed courtesy of the tens of thousands of dollars given to the organisation by the trade union bureaucracy—include any reference to the US extradition threat.

Socialist Alternative has boycotted the Assange defence campaign that developed before and after the WikiLeaks founder’s illegal arrest in the Ecuadorian embassy at the hands of British police in April last year.

For Hillier to now complain about Assange’s “betrayal” at the hands of the “liberal media” further exposes the pseudo-lefts’ opportunist politics. It represents Socialist Alternative’s desperate effort to muddy the waters while adapting to the political groundswell to defend Assange that is underway, as increasing numbers of workers and young people understand that defending the WikiLeaks publisher is essential to protect democratic rights more broadly.

Characteristically, Hillier’s article concluded with an effort to spread pessimism within the defence campaign. After citing the open letter issued by more than 100 doctors from 13 countries, demanding that proper medical treatment be provided Assange or he could die in Belmarsh prison, Hillier concluded his article: “Perhaps things are finally turning. But if the doctors are right, the shift might have come too late for Julian Assange.”

Genuine supporters of democratic rights can have no truck with such demoralisation and must instead urgently mobilise in Assange’s defence, including through upcoming public rallies being organised by the Socialist Equality Party: