A meeting of rank-and-file teachers, representing schools across the north-west working-class suburbs of Sydney, adopted a resolution on Monday calling for the freedom of Australian citizen and WikiLeaks publisher Julian Assange, as well as imprisoned American whistleblower Chelsea Manning.

The meeting was the first General Meeting of the Hills Association of the New South Wales Teachers Federation (NSWTF), the union covering public primary and secondary teachers in Australia’s largest state. The Hills Association is attended by representatives from schools in the north-west region of Sydney, which have some 1,330 financial union members. 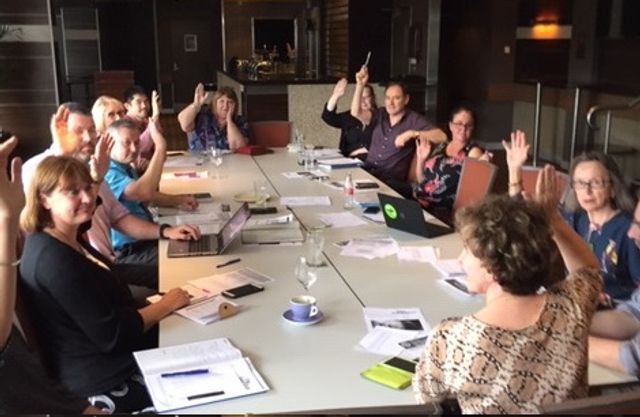 The resolution in defence of Assange and Manning was moved by longstanding Socialist Equality Party (SEP) member and teacher Erika Laslett, who is also a member of the Committee For Public Education (CFPE). It was passed unanimously by the 13 delegates present.

That this meeting of teachers opposes the ongoing persecution of journalist publisher and founder of WikiLeaks, Julian Assange and courageous whistleblower, Chelsea Manning. The UN Special Rapporteur on Torture, Nils Melzer, warns specifically that “Assange’s continued exposure to arbitrariness and abuse may soon end up costing his life.”

We insist that the federal Morrison government uses its diplomatic powers to organise the safe return of Assange to Australia. We resolve to send this resolution to other schools and workplaces.

In seconding Laslett’s motion, one teacher stated: “This is not about one man. This is part of a wider attack on journalism and the public’s right to information.” He cited the raids carried out by the Australian Federal Police on the Sydney offices of the Australian Broadcasting Corporation on June 5, 2019. The raid was part of the move by the Morrison government—emulating the US attempt to prosecute Assange—toward charging whistleblowers and ABC journalists for their exposure of the involvement of Australian troops in extrajudicial killings and other violations of international law in Afghanistan.

A similar resolution was passed last year by teachers and support staff at Footscray City College, a working-class high school in western Melbourne. According to NSWTF policy, the resolution of the Hills Association should now be presented to the union’s State Council.

The passage of the motion is a significant development, less than two weeks before legal hearings begin in London on February 24 to decide on the US application to extradite Julian Assange and put him on trial to face charges of espionage. The WikiLeaks founder faces the threat of a life sentence of up to 175 years, for publishing truthful information about the criminal operations of the American state and military.

The resolution is the outcome of the initiative of the CFPE, acting independently of the trade union apparatus. Like the establishment political parties and official media, the unions are maintaining a complicit silence on the persecution of Assange.

The trade unions in Australia are closely tied to the Australian Labor Party (ALP), which held government in 2010 and completely supported the US attempt to silence and destroy WikiLeaks and Assange with false allegations, slanders and state repression. Labor Prime Minister Julia Gillard outrageously labelled WikiLeaks’ courageous publication of the leaks made by Chelsea Manning, which exposed rampant US war crimes in Iraq and Afghanistan, as “illegal activity.”

The overriding concern of Labor, and the Coalition governments that have followed it, has been to suppress any information that fuels political opposition to the US-Australia military alliance. This includes Australian involvement in the illegal wars and global spying operations exposed by whistleblowers, such as Manning and Edward Snowden.

The trade unions have lined up behind the Labor and Coalition governments. Not a single serious action has been taken by any union, or the national Australian Council of Trade Unions (ACTU), to force the Australian government to end its collaboration with the US and British authorities, and use its diplomatic and legal powers to secure the freedom of a persecuted Australian journalist.

The leadership of the Media Entertainment and Arts Alliance (MEAA), which represents journalists and media workers, has passed resolutions opposing any extradition of Assange to the US but has not called a single stop-work meeting, let alone proposed strike action throughout the media industry, over the immense assault on freedom of speech taking place. The various state-based teacher unions have not even passed resolutions, despite the broad defence of Assange and democratic rights among educators.

Workers have to take matters into their own hands if fundamental democratic rights are going to be protected. The Australian parliamentary establishment will only fulfil its obligations to Assange if it feels compelled to do so, out of fear of a mass movement of the working class in Australia and internationally.

All workers who defend Assange, Manning and freedom of speech should seek to organise workplace meetings, at both unionised and non-union sites, and move resolutions similar to that passed by the Sydney teachers.

The SEP urges workers to organise delegations from your workplace to attend the rallies being held in Sydney on February 22, Melbourne and Wellington, New Zealand on February 23, and Brisbane on February 29.

The political aim of these rallies is to develop the independent mobilisation of the working class. Assange’s legal fight against the threat of extradition will be difficult and, most likely, extend over several years. Support must be built throughout the working class for political demonstrations, strikes and boycotts to demand his freedom, and freedom for Chelsea Manning and all other class-war prisoners, who are being persecuted for standing up for the truth and democratic rights.