Boris Johnson’s Conservative government went ahead with the deportation of 17 Jamaican nationals Tuesday, in the face of widespread popular opposition.

A further 25 men were given a brief reprieve by a last-minute ruling, on the basis that they had not had access to a mobile phone signal to make arrangements for their legal defence. The government is now viciously pursuing their removal, with the help of an extreme right-wing, dog-whistle campaign demonising “foreign criminals.”

The prime minister’s spokesperson issued a statement saying, “We bitterly regret this decision which prevents the removal from our country of foreign criminals convicted of rape, manslaughter, sexual attacks, violence and drugs crimes which spread misery across our communities.

“The legal process for removing these offenders, which has included repeated appeals and judicial reviews, has already cost the British public tens of thousands of pounds. The taxpayer will now be left with an even bigger bill and the prospect of convicts who are considered to pose a threat to the UK being granted bail while this matter is resolved.

“We make no apology whatsoever for seeking to remove serious foreign national offenders and will be urgently appealing.” 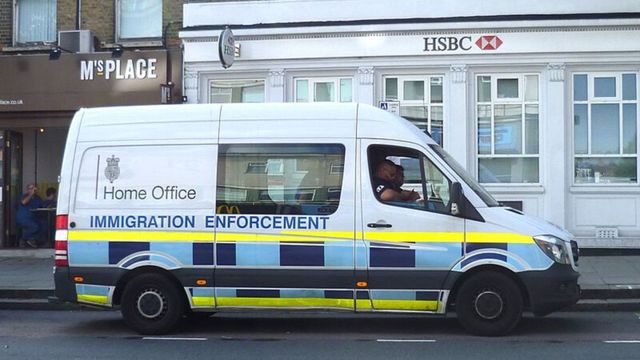 The government’s rhetoric has been echoed in the right-wing press, with the Daily Mail screaming, “A killer, two rapists and seven violent criminals are among the 25 serious offenders barred from being deported to Jamaica by court ruling leaving PM Boris Johnson ‘furious’ at judicial review procedure.” The Times editorialized Wednesday in favour of the government’s “right to deport.” The Daily Telegraph ran an opinion piece titled, “I’m on [Home Secretary] Priti Patel’s side in the deportation row—because she’s on our side.”

This xenophobic scaremongering seeks to present the deportations as an effort to protect the public from a handful of terrible criminals. It mirrors American President Donald Trump’s vitriolic rants about Mexican “rapists” and “animals”. As in the United States, this is a lying narrative used to advance a reactionary anti-migrant crackdown.

Six of the 17 men deported on Tuesday had served time for offences related to the supply or import of Class A drugs—of the kind cabinet minister Michael Gove admitted to taking as a young man. One had been imprisoned for importing Class B drugs and another for unspecified “drug offences and intimidating a witness.” Another of the deportees had been sentenced for burglary.

Of the 25 men still threatened with deportation, 14 are referred to by the press as being simply “drugs offenders,” with only one specifically labelled a supplier. According to their legal representatives, several were victims of gang grooming and could seek a defence under the Modern Slavery Act.

The central fact is that under Britain’s deeply reactionary UK Borders Act 2007, any offence can serve as a pretext for deportation. Enacted by Gordon Brown’s Labour government, the bill originally stated that the home secretary must make a deportation order against a foreign national who has been convicted of an offence and sentenced to 12 months’ imprisonment or more as a result—unless a case can be made, and accepted by a judge, that this violates the individual’s rights.

In 2012, the Tory government extended the legislation to cover those who had been sentenced to less than 12 months and to make it easier to override concerns about a person’s rights. Under the new law, any migrant who served more than four years in prison would be deported unless “very compelling circumstances” could be argued against it. Anyone who served one to four years would technically have recourse to the rights to private and family life under Article 8 of the European Convention of Human Rights. However, these exceptions were qualified to the point of uselessness. Finally, any convicted migrant who served up to a year in prison—or even no prison time at all—could be deported if it was deemed “in the public interest.”

Last year, 21-year old Chevon Brown was deported to Jamaica three years after having spent seven months in prison for a dangerous driving conviction—following a speeding incident which harmed no one.

The deportation law establishes a form of double jeopardy, whereby someone is punished twice for the same crime. The second punishment of deportation frequently involves ripping an individual out of their lives—leaving dependents behind—and depriving them of any material support, which is self-evidently disproportionate to the crime committed.

One of those deported on Tuesday, Ryan Crawford, moved to the UK to join his British father at the age of 12 and now has a partner and two young children living in Tower Hamlets. He has a disability requiring regular medication and has no one he can go to for help in Jamaica. He was imprisoned for a burglary offence, which his partner says was motivated by the pressures of a gambling addiction. The couple had sought a judicial review of his case but could not afford the costs.

His partner told the Metro, “They are already punished by going to prison. This is not the way to punish someone—by sending them to a country they don’t know, by tearing them away from their family and children. It’s so upsetting. I know he will not survive. This has destroyed my life and my children’s life. I don’t know what else to say.”

This cruelty serves definite political aims. The persecution of migrants is a flagship policy for Johnson’s Brexit government and its rabidly nationalist programme. It is an attempt to turn the tide on popular hostility to deportations following the Windrush scandal of 2018. Already in June 2019, former director-general of immigration enforcement David Wood was complaining in the Times, “Following Windrush there is no appetite for the enforced removal of those illegally in the UK.”

More fundamentally, the case seeks to establish a precedent for the mass removal of foreign nationals and to normalise the use of Gestapo-type tactics against them.

If even the most minor conviction can become a cause for deportation on the grounds that it affects “the public interest,” then it is only a few steps until migrants can be kicked out of the country for demanding too much of state services or provoking fascist mobs. They can then expect to have their homes raided, be carried off to detention centres, shackled, driven away in the middle of the night and manhandled onto a plane.

Chevron Brown explained how he was forced to wear restraints round his wrists and ankles: “They chained me like I was a wild animal.”

Twenty of the men given a reprieve on Monday were driven to Doncaster airport that night, despite the Court of Appeal already having ruled against their deportation, with no details given about what was happening to them. They were taken off the bus by three security guards to every one detainee and left at the airport for four hours, before being taken to nearby detention centres, where conditions are notoriously bad. Bella Sankey, director of Detention Action, called the actions “inhumane” and explained, “There was a huge amount of confusion. People were really scared and worried. People’s loved ones were getting really mixed communication during that period.”

There is mass opposition to this fascistic apparatus. Over 131,000 people have now signed the online petition “Stop all charter flight deportations to Jamaica and other Commonwealth countries” and several demonstrations have been held outside Downing Street. This action must be sustained and carried into every workplace and community. Above all, workers must take up a socialist perspective which recognises that the protection of migrants is the responsibility of the entire working class. Only this immense social force can guarantee the right of all to live and work where they please, free from the threat of persecution.