General Motors and the Confederation of Mexican Workers (CTM) are moving quickly to push through another pro-company contract at GM’s manufacturing complex in Silao, Mexico. The factory, which employs 6,000 workers who build the top selling Silverado and Sierra pickup models, has been the site of growing rank-and-file opposition to GM and the CTM.

Under the terms of the recent labor “reform,” enacted by the government of President Andrés Manuel López Obrador (AMLO) and his Morena party, over 500,000 collective agreements in Mexico need to be re-certified by a new federal labor board by May 2023. In order for the contracts to be legally sanctioned, the unions must first get at least 30 percent of the workers at each workplace to vote to “acknowledge” the union as their bargaining representative. So far, 86 trade unions have carried this out.

The CTM has long functioned as a corporatist tool of transnational corporations like GM, which routinely sign “protection contracts” with the gangster-ridden union to enforce low wages and sweatshop conditions. After last year’s wave of wildcat strikes by maquiladora workers in Matamoros, which erupted in opposition to the CTM, the AMLO government is moving quickly to provide a democratic veneer to the unions. The labor reforms were also demanded under the new trade deal with the United States and Canada (USMCA). The Trump administration and the US and Canadian trade unions that backed the trade agreement fear that the contagion of class struggle in Mexico will spread to the US and Canada. 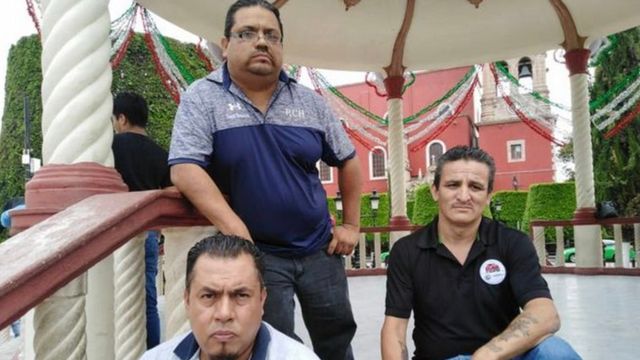 Three of the Silao Seven

At the GM Silao complex, the CTM carried out a union certification vote last week to elect a “Contract Revision Committee” from 57 candidates it selected behind the backs of workers. Then, it placed their names and pictures on posters at the plant under the words “free, secret, personal and direct elections,” the same wording required by the labor reform.

Workers at the plant, who are remaining anonymous to protect themselves from company and union retribution, told the WSWS Autoworker Newsletter that most candidates were “union delegates themselves” and that “very few are rank-and-file workers.” One worker identified the candidate Maria Guadalupe Perez García as the niece of one of the union officials. During the voting, several workers said that they saw union delegates stuffing stacks of filled ballots into the voting boxes, with one worker stating unequivocally, “those elections were rigged.”

The CTM announced the results last weekend and workers have noted that “only two or three people” who were elected are not tied to the trade union. Even those “have already sold out,” they told the Autoworker Newsletter.

One of the elected “representatives,” Maria Teresa Rangel, explained on social media that the delegates and union officials met on Monday and Wednesday and talks with management would start on February 17. Describing what the CTM officials said, Rangel said, “We discussed the labor reform being updated, that we need to be up to speed about what is happening with the government because those are arguments that need to be raised with management, and we must have good arguments about demanding more.”

The claim that the labor reforms strengthen the hands of workers against GM and other transnational giants is a fraud. Whether the government is trying to refurbish the image of the CTM, the Revolutionary Federation of Workers and Peasants (CROC) and other discredited unions or promote supposedly “independent” unions aligned with the US AFL-CIO, the aim of the AMLO administration to defuse the ticking bomb of working class opposition to his government’s program of attracting foreign investment with cheap labor and the suppression of strikes.

As Debate columnist Darío Celis Estrada wrote, “The Andrés Manuel López Obrador regime will have to dance at the beat of its commercial partners and as proof, regarding trade unions, the party is only getting started.”

AMLO, who was elected in 2018, came out of the ranks of the oligarchic Institutional Revolutionary Party (PRI)—which held uninterrupted power from the time of its founding in 1929 until 2000—to provide a “left” cover to the capitalist state. He was eagerly supported by figures like Mexican billionaire Carlos Slim and Larry Fink, whose BlackRock firm is one of the largest shareholders of GM.

The USMCA trade deal, which was passed with bipartisan support in the US and the backing of the AFL-CIO, aimed at strengthening the position of American imperialism against the growing challenge by China. With a mounting slowdown of the world economy and an intense struggle erupting in the global auto industry over domination of the future electric and autonomous vehicle markets, it is imperative that US-based transnationals squeeze the Mexican working class even more brutally.

At the GM Silao complex, a group of rank-and-file workers named “Generating Movement” campaigned against the sham vote of the CTM and called for workers to organize independently. During the 40-day national strike at GM’s US operations last year, the group actively opposed speed-ups and mandatory overtime to support the strike, leading GM and the CTM to single out and fire the courageous workers. Fearing that opposition would spread to other plants, GM shut down the Silao plant for several weeks while keeping its other Mexican plants running.

After the United Auto Workers (UAW) isolated and betrayed the strike in the United States, GM has gone on the offensive against workers in Canada, the United States and Mexico, including plant closures, firing militant and senior workers and imposing forced overtime, seven-day weeks and 12-hour shifts. The company made a particular example of the Silao workers, fearing above all a rebellion against the unions in the US, Canada and Mexico that have long peddled nationalist poison to divide workers and the growing efforts of North American workers to coordinate their resistance across all borders.

The Silao workers told the WSWS Autoworker Newsletter that management told workers during a plant meeting on February 5 that they will not get their yearly bonuses, normally paid to workers in May, because of the cost of the US strike. This provoked widespread anger with workers posting messages on social media calling for collective action. “We must organize a strike. I hope that the entire GM complex unites now. We already have the example to follow in the United States,” wrote a one worker.

Debunking AMLO’s claims that the labor reforms will provide workers with greater protections, Israel Cervantes, the elected spokesman of the Generating Movement group, told the Autoworker Newsletter that the Guanajuato human rights director, Lucila Gallegos, dismissed the workers’ complaints about their unjustified termination and sent them to the new federal labor board.

“I went last week to the Federal Conciliation and Arbitration Board N. 28 to ask about registering a trade union and about our complaints against violations of workers’ rights and they refused to give me an answer,” Cervantes said. The response he said was just like before the labor reform. “It’s the same,” he said, “as not going [to the arbitration board] at all.”

Cervantes also explained that the “New Workers Central” branch at Guanajuato, which is led by the Electrician’s Union (SME) and is partnered with AMLO’s Morena party and the US AFL-CIO, has sought to lure his group into joining their trade union to compete for the contract. The workers have taken the principled decision to reject this.

Just like the CTM, the so-called independent unions uphold national divisions and subordinate the interests of workers to the capitalist system and the ruthless drive by the transnational corporations to find the cheapest source of labor and the highest profits. The defense of capitalism is incompatible with securing jobs, decent wages and other social rights.

That is why workers in Silao, across Mexico, the US and Canada must build rank-and-file factory committees, independent of the pro-capitalist and nationalist unions. Factory committees must counter-pose the needs and social rights of workers to the dictates of the corporations and their trade union accomplices and link together the struggle of workers across North America and the world to secure workers’ independent interests. The development of a such a counteroffensive by the working class must be fused with an international socialist program and leadership, independent of the entire trade union apparatus and all pro-capitalist parties.