For the past two months local Michigan publications have been reporting on extended work hours for General Motors Customer Care & Aftersales (CCA) facilities since the end of the GM strike on October 26. Six GM plants were placed on “emergency status” in Michigan, forcing workers to work overtime six to seven days a week. Many workers work seven days a week or 12-hour shifts.

Management is determined to recoup, out of the sweat of workers, production it lost due to the 40-day US autoworkers strike this fall. General Motors reported a loss of $194 million in the fourth quarter of 2019 largely due to the walkout. The company said that the strike imposed a total cost of $2.6 billion in earnings before interest and taxes in the fourth quarter and $3.6 billion for the year. Overall sales were down 8 percent globally. Despite this, GM reported an operating profit of $8.4 billion for 2019 and its North American operations saw an $8.2 billion profit, though still representing about a $2.6 billion drop from 2018. 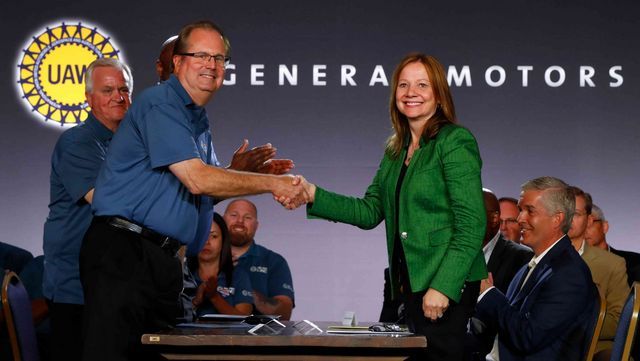 As a consequence, profit sharing checks for GM workers will be about $8,000 for the 2019 period, down from $10,750 in 2018. Thus, under the reactionary, corporatist profit sharing arrangements negotiated by the UAW, workers are essentially being forced to foot a portion of the cost to GM of the strike.

Profit sharing checks for workers at Ford are also lower than 2018, based on the company’s pre-tax profits on its North American operations. The company’s net after-tax profits were just $47 million in 2019, down from $3.7 billion in 2018. The company blamed the collapse on lower global sales and significant problems with the launch of its new Ford Explorer SUV.

The World Socialist Web Site Autoworker Newsletter has been investigating conditions facing GM workers in the wake of the strike.

At the GM Ypsilanti Processing Center, the 125 hourly workers have had only a few days off since the mandatory overtime began following the strike. This and similar facilities have been in emergency status, enforcing seven-day workweeks. Reportedly some at Ypsilanti have been disciplined due to missing work from exhaustion

Spokesperson for GM, Jim Cain, blamed the mandatory hours on the loss of production the company suffered during the 40-day strike. However, workers reported to the Detroit Free Press that over the past 10 years any shutdown or slowdown of production has resulted in the imposition of mandatory overtime.

A worker from GM CCA in Pontiac, Michigan confirmed these same conditions at their facility. “[There is] emergency status right now—forced us to 10 hours a day Monday through Friday and eight hours Saturday through Sunday.

“It seems as though people think they are using the status as an excuse to do the things that they are doing.”

This worker also expressed concern over the possibility of layoffs. “They’ve [UAW] told us they are going to spin us off. The negotiators came to the local and said that they are to make certain agreements. All of the parts distribution centers are going to get spun out.” This is in line with the so-called pathway for hiring temps by GM, especially at Fort Wayne Assembly where the media celebrated the hiring of 148 temps while management meanwhile fired another 240. At Detroit Hamtramck, workers have been forced to work 10-hour days in advance of the plant shutdown set for the end of February, with a possible restart date sometime in 2021.

As r eported by the WSWS, the UAW did not negotiate any language in the current contract limiting the percentage of the workforce on temporary status, essentially allowing the company to transition to a workforce consisting mainly of super-exploited contingent employees.

GM’s Flint UAW chairman Eric Welter and the plant manager wrote a joint letter to Flint workers, stating the necessity of overtime to meet customer demand. “The bottom line is our customers cannot and will not wait any longer to make a purchase. As a leadership team, we feel it is crucial to act now to identify a scheduling solution that will help feed market demand without compromising the quality and safety of our team.”

UAW officials made cynical and hypocritical remarks to the press on the forced overtime question. Martin Wood, the bargaining chair for UAW local 167 said, “They’re upset. I can’t sleep some nights because I feel for them. And it’s a tough situation that we’re in.” While Bill Bagwell responded, “Our people are working their butts off to take care of the customer. We understand, if the customer doesn’t buy a General Motors car, we don’t have a job.”

However, these officials fail to mention the role of the UAW in the decades long assault on the jobs and working conditions of auto workers that was stepped up in the aftermath of the 2009 forced bankruptcy and restructuring of General Motors and Fiat Chrysler.

The UAW isolated and betrayed the 40-day strike against General Motors last fall. They refused to link the struggle of US GM workers with brother autoworkers in Mexico, let alone workers at Ford and Fiat Chrysler. The UAW did nothing to publicize the case of victimized workers at GM in Silao, Mexico who carried out a ban on overtime in support of their US brothers. Instead, the UAW promoted filthy anti-Mexican chauvinism. Striking workers were meanwhile forced to subsist on starvation strike pay of between $250 and $275 per week. In the wake of the strike the UAW has done nothing to defend workers for posting comments critical of management on social media during the strike.

Parts workers at the Customer Care & Aftersales facility in Burton, Michigan outside Flint spoke to the WSWS Autoworker Newsletter this past week to discuss the situation they have been forced to confront over the past 90 days.

Workers were particularly bitter over the fact that their demands, including pay parity between all workers in the auto industry, an end to the tier wage system, full-time positions and job security were all sold out by the UAW. Instead, a handful of temporary workers, like those from the CCA Burton facility, were given full-time positions with forced overtime and no job security, looming layoffs and production speedups.

In the wake of the strike, the WSWS has renewed its call for the formation of rank-and-file factory committees in all the auto plants, independent of the pro-management UAW. The fight for the elementary interests of workers, such as decent and safe working conditions, job security and the reinstatement of the eight-hour workday requires building new fighting organizations of struggle.

The building of such committees requires the development of a new leadership in the working class based on an internationalist and socialist perspective in opposition to the nationalist and pro-capitalist program of the UAW. Those interested in finding out more should contact the WSWS Autoworker Newsletter (autoworkers@wsws.org).