About 1,000 school teachers and principals protested in Colombo on February 14 to demand higher pay and better conditions. The demonstration marked the entry of another key section of Sri Lankan workers into the growing struggles that have developed since President Gotabhaya Rajapakse came to power. 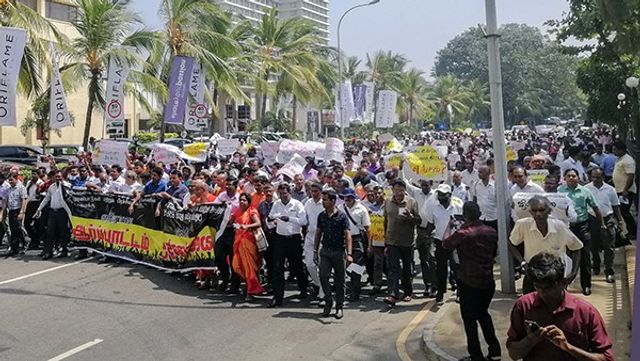 The teachers’ main demands include a pay rise, abolition of salary anomalies, an end to pension cuts carried out since 2016, no more clerical work imposed on teachers and for the government to allocate 6 percent of GDP to education.

Teachers from across the island participated, despite the efforts of the teacher union bureaucracy to limit participation and in the face of communalist rhetoric by the Rajapakse government against Tamils and Muslims.

The Sunday Observer reported on February 16 that 44 protests, involving thousands of workers from different sectors, have been held outside the Presidential Secretariat in the first 15 days of this month. Participants have included workers from the Petroleum Corporation, Housing Development Authority and in the Archaeology and Samurdhi (Prosperity) departments as well as the railways. 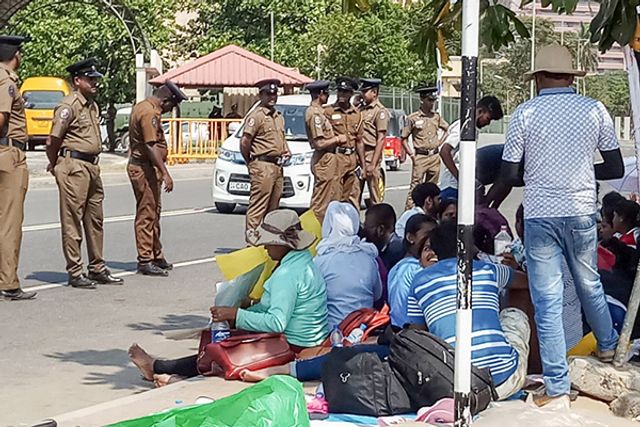 About 20,000 workers from these sectors have been summarily sacked by the Rajapakse government, which claims that they were “irregularly” recruited by the previous regime. Students from public higher education institutions have demonstrated for more facilities.

While the union leaders were inside, about 100 riot police attempted to force the chanting teachers away from the Presidential Secretariat gate to a so-called “Agitation Site.” While several female teachers were beaten by the police, teachers defied the police threat and continued their demonstration. 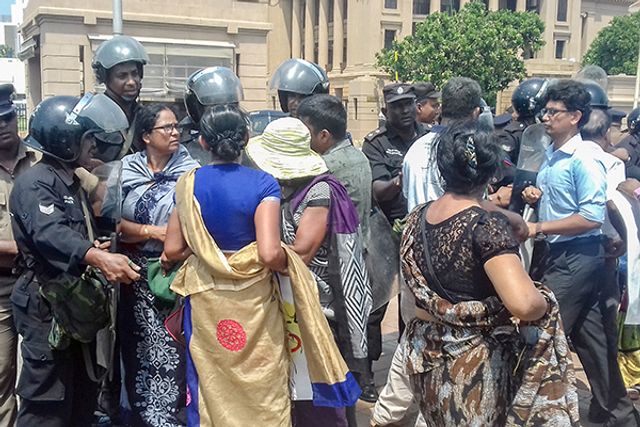 Police established the Agitation Site in early February on Galle Face Green, away from the Presidential Secretariat, on the orders of the Sri Lankan president. Protesting workers, however, have repeatedly defied police attempts to confine them to this area.

The teachers’ union leaders returned empty handed to the protest after a worthless discussion with a lower level secretary to the president. In an attempt to deflect the teachers’ anger and frustrations, CTSU leader Mahinda Jayasinghe demagogically declared: “This issue should be resolved through a proper discussion before February 20. If not, we will close all the schools starting on February 26.”

Jayasinghe lamented that he and other union leaders had previously met with Dulles Alahapperuma, Rajapakse’s new education minister, on December 17 and on January 21. These discussions, he said, had resolved nothing so they had decided to come and meet with President Rajapakse.

Addressing demonstrators, CTU leader Stalin repeated Jayasinghe’s strike threat and said: “During a protest last September, the police took us to the secretary to the President but we’re ashamed to say that there’s been no result from these discussions.”

While teachers have consistently demonstrated their determination to fight for full realisation of their demands, the union leadership have worked to contain all industrial action and wind back their claims. On September 26 and 27 last year, more than 200,000 teachers walked out on strike and thousands marched in Colombo.

The walkouts were part of a wave of industrial and protests that erupted across the country in opposition to International Monetary Fund (IMF) austerity measures that were being implemented by the former government of President Maithripala Sirisena and Prime Minister Ranil Wickremesinghe.

Various pseudo-left groups and the unions, including the teachers’ unions, are acutely nervous about the developing working-class movement. These formations all oppose the development of an independent, unified mobilisation of the working class against the Sri Lankan government as advocated by the Socialist Equality Party (see: “How to win the teachers’ fight in Sri Lanka”).

During last year’s election the pseudo-left and key union formations backed the ruling United National Party and its presidential candidate Sajith Premadasa, claiming he represented a “lesser evil.” This paved the way for Gotabhaya Rajapakse and his Sri Lanka Podujana Peramuna organisation to exploit the anti-government opposition with bogus promises of improved living standards.

The Joint Teachers’ Services Union, which is controlled by the fake left Frontline Socialist Party (FSP), did not participate in last week’s protest, blaming the other unions for betraying the teachers “original demands.” The FSP-controlled union has no fundamental political differences with the other teacher unions and insists that more protests can pressure the new Rajapakse administration to grant the teachers claims.

Like the previous government, the Rajapakse regime, which confronts mounting debts and slowing economic growth, is committed to implementing the IMF’s austerity measures. It will not grant pay claims and calls for improved working and social conditions by any section of the working class.

The state crackdown last week on demonstrating teachers and the establishment of the so-called Agitation Site, with a new nearby police post and dozens of armed riot police ready to take action, are an indication that much more brutal measures are being prepared against the working class by the Rajapakse government.

In an attempt to downplay the political significance of last week’s police assault, All Ceylon United Teachers Union leader Yalewela Pannasekera, who is a Buddhist monk, declared that teachers should “not to take seriously the minor attack of police officers.” Pannasekera’s claims are a clear signal that he, and the rest of the unions, are ready to work with the state and the government to politically disarm the working class.

The a uthors also recommend: