Tens of thousands protest all over Germany against right-wing terror

On Thursday, tens of thousands of people in over 50 cities took part in spontaneous vigils and demonstrations in memory of the victims of the Hanau attack. In Hanau alone, thousands gathered to express their horror and anger at the right-wing terror. Many deplored the close links between right-wing terrorism and the state apparatus and stressed the significance of right-wing and anti-refugee policies in the attack.

At the Heumarkt in downtown Hanau, where the first four people were shot on Wednesday night, many groups of people stood together until late in the evening. This is where we met Sadveddin and his family.

“This racist attack affects our compatriots and all of us who were born and raised here in Germany,” Sadveddin says. “This is not the first attack. We were immediately reminded of Enver Simsek, the florist killed, and the other victims of the [neo-Nazi] NSU. Now you can see that nothing has been done since then.”

Sadveddin works at BASF in Ludwigshafen and immediately came to Hanau with his whole family to express his solidarity. He reported that shortly before that, the “great politicians” Hesse state Premier Bouffier, federal President Steinmeier and Hanau’s mayor Kaminsky were there. “They didn’t say a word to us, they just laid down their flowers in front of the press and left very quickly.” But he was not surprised. What he found terrible was “that the perpetrator has announced practically everything on Facebook in advance” without anything having been done to prevent the terrorist attack. 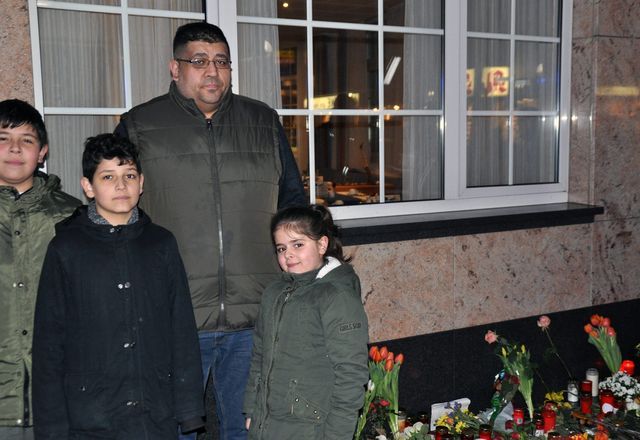 Sadveddin and children in Hanau

Thousands have gathered on the marketplace in Hanau. Hesse state Premier Volker Bouffier and Federal President Steinmeier gave short speeches. There were repeated shouts of “Nazis out!” by the crowd.

Many came from around Hanau, like Julia and Kevin, who are from Nidderau, “to show that racism is not a majority opinion,” as they said. “The political treatment of the Confidential Informants inside the NSU [National Socialist Underground] was already a tragedy,” Kevin remarked, “for far too long it was kept silent. One can no longer tolerate this silence.” A boy reports that he was at the scene of the crime 10 minutes before the bloody crime. “It could have been me.”

“We are deeply sad,” said Zeynap, who came to the vigil with her husband Suleyman from Rodgau. “The attack was aimed specifically at Muslims.” “That’s the AfD [Alternative for Germany] tactic,” Suleyman added. “Hitler also pulled this scam. First, he raised social issues in order to gain popularity, and combined this with racist hate.” 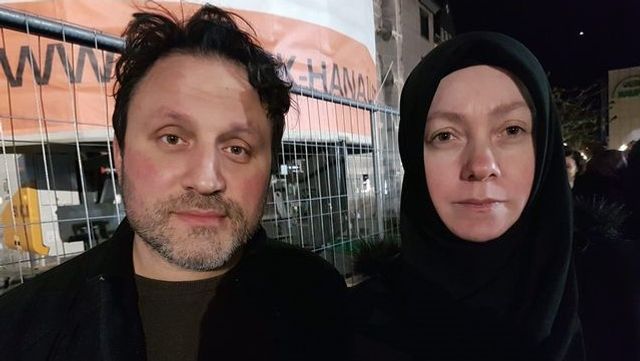 Suleyman and Zeynep in Hanau

The two criticized the fact the federal government had learned nothing. “When this government came to office, it even cut funding to fight right-wing extremism. We are left alone by the politicians,” he added. “How much longer should we wait? Until racism turns into a giant monster?”

Ali Yaman lives in Hanau and said he knew the victims, “I was born in Hanau.” A friend accompanying him added, “These were our friends and relatives who were murdered here. Young, innocent people have died. It didn’t have to happen.” 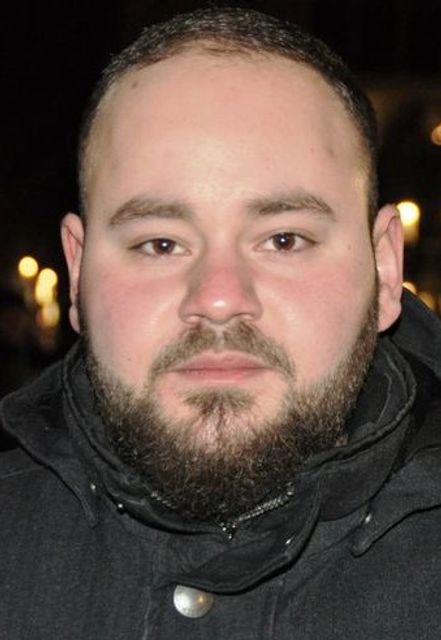 “The perpetrator could fire in all directions unhindered for hours,” said Ali Yaman. “He even had a gun license and could get all his equipment on the Internet. The perpetrator was well known! But why wasn’t he being watched?” Young people were still stunned that “these murders could have easily been prevented.”

At the vigil in Stuttgart, many of the hundreds of participants asked critical questions about the perpetrator’s connections to the state apparatus and the responsibility of the establishment parties.

Two demonstrations took place in Berlin. The establishment parties had called a demonstration in front of the Brandenburg Gate, while various social initiatives organized a rally on Hermannplatz in the Neukölln district, which was much bigger, with thousands of participants.

WSWS reporters spoke to Mohammed and Fatid, who had both fled Syria about five years ago and have recently started studying economics in Frankfurt (Oder). They had heard about the demo by chance on social media and were positively surprised about the mass of people who had come.

“Yes, the right is in the minority, but this is enough to spread such fear. I’ve been in Germany for a good five years and it’s only recently that I really feel like a foreigner,” Fatid said when we approached him. “Such attacks are the natural reaction to the media, which only spread hatred. Especially recently, there has been a lot of talk about Islam.” A situation like today would not have been possible without the years of haggling in the media, both explained.

Rike and Bobby were also outraged about the role of the media in the rise of the right in Germany. Both are studying humanities at the Technical University Berlin. “The media only stir things up. A terrorist attack like yesterday is happening and all you hear is, ‘Yes, but the left-wing extremists.’ Money is earned by stirring people up against each other, while right-wing terrorist networks and crimes are played down.”

“The parties in the Bundestag [federal parliament] also bear responsibility for the rise of the right,” he said, “The major parties are doing nothing. All the parties have moved to the right and are helping to normalize the politics of the AfD.” Rike stressed that while Hanau was the concrete cause for the demonstration today, the actual background was much broader.

Hundreds of people took part in the vigil at the Brandenburg Gate. Pensioner Holger had come spontaneously after hearing about the attack in Hanau. “That simply can’t be!” he said. “It’s mainly the AfD’s fault”. It had made this agitation against foreigners acceptable again, so one should not be surprised that these terrible attacks happened more and more often, he said. 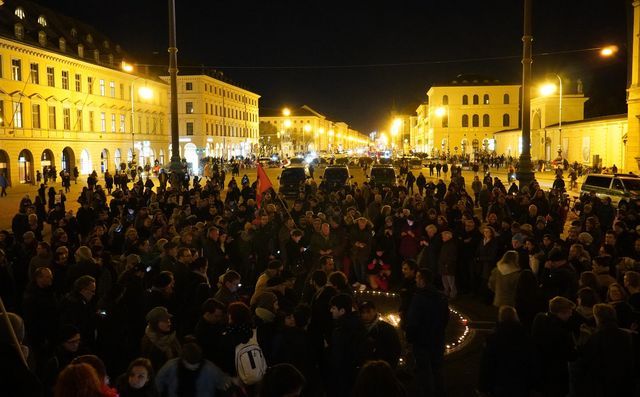 Remembrance vigil at the Brandenburg Gate in Berlin

Asked about the latest events in Thuringia, Holger remarked that the Christian Democrats (CDU) and Free Democratic Party (FDP) were also to blame for the fact that the AfD was gaining more and more influence. “You have to fight the right-wing radicals and not let them vote for you”.

In Munich, hundreds of people took part in a vigil on Odeonsplatz.

In Duisburg, around 200 people spontaneously gathered in the city centre. The alliance “Duisburg stands against” had called for a rally against fascist terror.

Sebastian and Markus had arranged to meet at the demonstration. Sebastian supports actions against the right where he can, saying he was shocked by the election of state premier Kemmerich in Thuringia with the effective collaboration of the CDU/FDP and AfD. He was critical of both the Left Party’s offers to the CDU before and after Kemmerich’s election. “Since I’ve been eligible to vote, I’ve voted for the Left Party; trusting that the Left Party will sit there and make appropriate policies.” This trust is obviously damaged. “I can understand that [former Left Party state premier] Ramelow and the Left Party are moving to the right to get even more votes. But there’s a danger in making deals with the devil.” 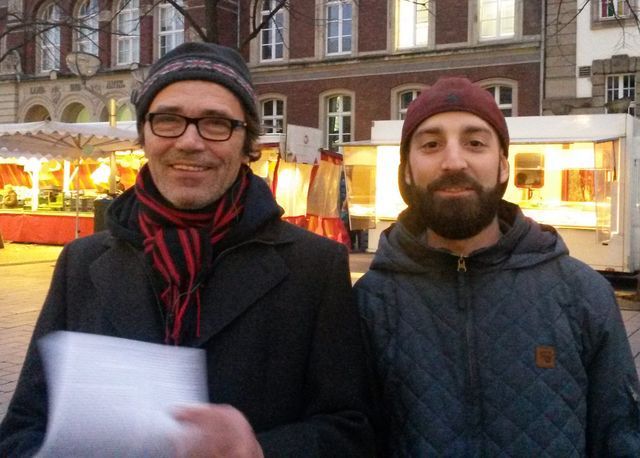 Markus and Sebastian (left) in Duisburg

Kemal, who took part in the demonstration, also thought that all the Berlin parties shared responsibility for the right wing’s activities. “CDU, FDP and AfD had come to an agreement in the weeks before the demonstration. They share the same politics.” Kemal was particularly outraged that an equivalence was being drawn between “left-wing extremists and right-wing extremists or the left and AfD. Left-wingers and left-wing extremists are not misanthropists and racists.” The former head of the secret service, Maassen, had always used this equation to work together with the right and the AfD, he said.

Kemal thought that large sections of the population had underestimated the right-wing extremists in recent years. “But now, it is becoming open and really threatening—not only for Muslims and people with a migration background; also for German dissidents.” Now one had to stand up against the right-wing danger.

Eva, a student, had learned about the demonstration in Duisburg through Instagram and came spontaneously. She was very upset and worried about the murders in Hanau, that things “could become like our grandparents’ time in Germany.”

She was also very angry that so-called “left-wing extremism” had been denounced as a reaction to the events in Hanau. “Not only from the AfD, but also from the CDU and other moderate parties—and this on a day when nine people were killed in Hanau. I find that simply disgusting.” When she saw on television how Kemmerich had shaken hands with AfD leader Björn Höcke in the Thuringian parliament, she “simply got sick.”

Sound the alarm! Political conspiracy and the resurgence of fascism in Germany
[14 February 2020]

Jörg Baberowski insists that Hitler was “not vicious”
[16 May 2017]