US intelligence agencies meddle in Nevada primary to sabotage Sanders

On the eve of Saturday’s Nevada Democratic caucuses, with polls predicting a major win for Vermont Senator Bernie Sanders, the Washington Post reported Friday afternoon that “US officials” have told Sanders that the Russian government is working to aid his campaign for the Democratic presidential nomination.

According to the Post, President Trump and members of Congress have also been informed of the alleged “Russian assistance” to Sanders. 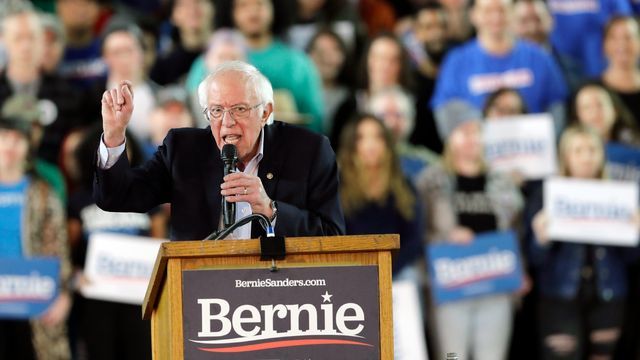 "It was the Washington Post? Good friends," Sanders said crypically.

The Post, owned by billionaire oligarch Jeff Bezos, the world's richest man, has consistently opposed efforts to expose and combat social inequality. Its editorial board has pilloried proposals by Sanders and rival Elizabeth Warren to tax the richest Americans, and has condemned research by inequality investigators Gabriel Zucman and Emmanuel Saez.

The release of the report just one day beofre the Nevada caucuses, seen as a pivotal point in Sanders' cementing of his lead as the Democratic frontrunner, is a classic disinformation operation by the intelligence agencies, to which the Washington Post is politically allied.

Its release was aimed at threatening and intimidating voters who would otherwise support Sanders. The one report, without any detail, substantiation or proof, instantly became the lead story on Friday night and Saturday morning, as voters went to the polls on Saturday.

The Post report names no sources, does not identify the nature of the government officials who briefed Sanders, and provides no information about the content of the alleged support by Moscow for Sanders. No facts are presented to substantiate the vague claim of Russian government backing for the Sanders campaign.

In keeping with the standard practice of the so-called mainstream media, the Post uncritically presents this latest claim by US intelligence of “Russian meddling” in American politics as indisputable fact. The Post story follows the front-page report by the New York Times on Friday that intelligence officials last week briefed the House Intelligence Committee on what they claimed to be ongoing Russian interference in the 2020 elections aimed at securing the reelection of President Donald Trump.

That briefing reportedly so incensed Trump, who saw it as buttressing the campaign of the Democrats to brand him a stooge of Putin, that he sacked his acting director of national intelligence, Joseph Maguire, and named the US ambassador to Germany and Trump loyalist Richard Grenell to replace him.

These developments highlight the massive role that the unelected agencies of US subversion and provocation abroad play in US elections. Even if the claims of Russian intervention in US elections were true—and no evidence has ever been produced to substantiate them—such operations would pale in comparison to the role of the FBI, the CIA, the Pentagon and other agencies in manipulating elections and seeking covertly to affect their outcomes.

This is on top of the role of corporate donations and campaign bribes by billionaire oligarchs in installing their preferred candidates in power.

Sanders has fully backed the years-long campaign by the Democratic Party to whip up anti-Russia hysteria and oppose Trump for being insufficiently aggressive against Moscow. He immediately lent credibility to the latest anti-Russian salvo. The Post quoted him as telling it in a statement: “I don’t care, frankly, who Putin wants to be president. My message to Putin is clear: stay out of American elections, and as president I will make sure that you do.”

He continued: “In 2016, Russia used internet propaganda to sow division in our country, and my understanding is that they are doing it again in 2020. Some of the ugly stuff on the internet attributed to our campaign may well not be coming from real supporters.”

The latter statement reiterates Sanders’ suggestion at Wednesday’s Democratic debate in Las Vegas that social media posts critical of leaders of the Nevada Culinary Workers Union leadership, which denounced Sanders’ plan for government-run health insurance, came not from his supporters, as claimed by his Democratic rivals and the corporate media, but rather from Russian trolls.

“All of us remember 2016, and what we remember is efforts by Russians and others to try to interfere in our elections and divide us up,” Sanders said. “I’m not saying that’s happening, but it would not shock me.”

Speaking to reporters on Friday, Sanders called Putin a “thug” and an “autocrat.”

The stepping up of the anti-Russia campaign and the attempt to turn it against Sanders coincides with a coordinated drive by the Democratic Party establishment and the corporate media to undermine the senator’s rise in the polls and prevent him from securing the Democratic presidential nomination at the party’s national convention in July.

This ruling class opposition to Sanders is not so much about Sanders himself—a longtime ally of the Democratic Party and loyal defender of American imperialism—as about concerns over the growth of anti-capitalist and pro-socialist sentiment and the upsurge in the class struggle of which Sanders is the initial beneficiary. The financial oligarchy is incensed and frightened by Sanders’ calls for modest increases in its taxes, his talk of ending private health insurance and reining in the profits of the pharmaceutical giants, and his appeals to popular anger over the staggering levels of social inequality.

On Friday, the Financial Times published an interview with the recently retired CEO of Goldman Sachs, Lloyd Blankfein, in which the billionaire life-long Democrat denounced Sanders, praised his billionaire rival Michael Bloomberg, and said that if Sanders got the Democratic nomination he would likely vote for Trump. In the interview, he praised the latter’s corporate tax cuts and lifting of regulations on business.

Jim Cramer, the host of CNBC’s “Mad Money” program, summed up the outlook of the financial oligarchy when he said that Wednesday’s Democratic candidates’ debate was “painful” because “your wealth was really under fire.” He joined Bloomberg in branding Sanders a “communist,” saying, “Is he really a socialist? Or is he a communist? What is socialist about what he wants? Isn’t he more of a communist?”

With the virtual collapse of the campaign of former Vice President Joe Biden and Bloomberg’s poor performance at Wednesday’s debate, media pundits and Democratic officials are concluding that Sanders will come to the July party convention with a large lead in committed delegates, but will be short of the 1,991 needed to gain a majority and secure the nomination on the first ballot.

Backroom moves are being stepped up to channel delegates and donors currently backing so-called “moderates” such as Biden, Amy Klobuchar and Pete Buttigieg behind Bloomberg or the “progressive” Elizabeth Warren in order to block Sanders at the convention. The idea is to mobilize the nearly 800 elected officials, Democratic National Committee members and other party officials who constitute the “superdelegates,” who cannot vote on the first ballot, to vote on the second to install the commonly agreed upon alternative to Sanders.

This was prefigured at Wednesday’s debate when all of the candidates, with the exception of Sanders, said the candidate who gets the most votes in the primary contests should not necessarily be declared the party nominee at the convention. This anti-democratic position is being lauded in the media as the defense of established rules and procedures.

The day after Wednesday’s debate, Harry Reid, the former Senate majority leader and longtime senator from Nevada, openly called for a brokered convention to deny Sanders the nomination. He said, “And you have most of the people who are not Bernie Sanders, are people who are moderates, and maybe they’ll work something out to get together and try to find that one person who can come up with the number of delegates. Maybe that’s one way to do it.”

Reid also praised Warren, who during the debate joined in the socialist-bashing of Sanders, declaring once again her support for capitalism and adding, “They [Democratic voters] are worried about gambling on a revolution that won’t bring along a majority of this country.”

Politico reported that Bloomberg is privately lobbying party officials and donors allied with his “moderate” rivals to shift their allegiance to him and block Sanders at the convention. No doubt Bloomberg is using his unlimited cash hoard—his Federal Election Commission report filed this week said he has spent $464 million of his own money in the three months since he announced his bid for the White House—to induce party officials to come over to his side.

Sanders’ response has been two-faced. While stepping up his rhetorical attacks on inequality and the “billionaire class,” in Wednesday’s debate he disavowed any supporters who dared to criticize the trade union bureaucracy. He said, “And if there are a few people who make ugly remarks, who attack trade union leaders, I disown those people. They are not part of our movement.”

In a preview of an interview to be aired this Sunday on CBS’ “60 Minutes” program, Sanders in one breath denounces Bloomberg as a billionaire oligarch who is trying to buy the election, and in the next declares, “No matter who wins the nomination, we are going to come together to defeat the most dangerous president in US history. Everyone on that platform [including Bloomberg] understands that."