On February 18, Oberlin College President Carmen Twillie Ambar announced the small liberal arts college in Ohio was exploring how to contract out the jobs of over 100 culinary and custodial workers who work under a contract negotiated by the United Auto Workers (UAW). The announcement has been met with protests from students and faculty at the college.

Ambar sent out a letter to students, faculty and staff at Oberlin detailing the administration’s decision to pursue discussions with outside vendors in order to “help balance” the school’s budget. The letter states, “Oberlin has notified the United Auto Workers that we are formally considering contracting with outside vendors for dining and custodial services currently provided by college employees… This step is permitted under our UAW contract, and we will begin collective bargaining with the UAW in coming weeks to determine how best to move forward.” 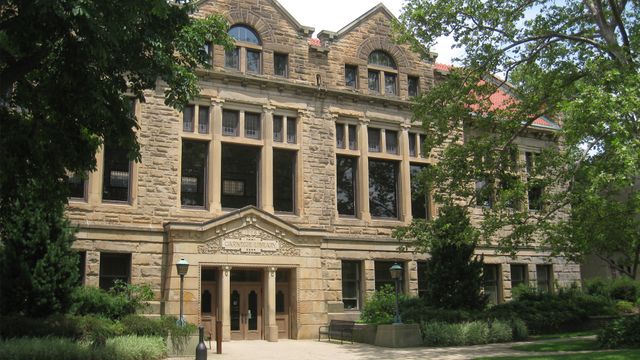 The letter specifies that the changes could impact as many as 52 full-time dining workers and 56 full-time custodial workers. This could save the school $2 million in annual operation costs for both dining and custodial services.

Ambar also included the possibility that workers could interview with the contractor to be hired for their current job—a proposal that would likely lead to a cut in pay or benefits—and “a smaller group may be eligible for other employment at Oberlin.” She specified that the “smaller group” remaining at Oberlin and potential severance packages will be negotiated with the UAW.

Erik Villar, UAW Chair at Oberlin College, said the layoffs are planned to take place on June 30. Buffy Lukachko, the head trucker in the Transportation Department at Oberlin College and the bargaining representative for the UAW, said the college’s decision to lay off workers was likely a means to slash health care costs too. She told the Morning Journal, “My wages, other’s wages, might be roughly $28,000 a year, but the expense the College has to pay out for health care is also about $28,000 a year. So, when they are talking about wages, they’re talking about health care; they don’t want to pay for that anymore.”

The day after the Ambar’s letter was sent, 800 students and staff demonstrated outside of the Oberlin faculty meeting to oppose the threat to the workers’ jobs and livelihoods. The crowd chanted “Workers are our family!” and held homemade signs expressing support for the workers.

While the protests were an immediate response to the announcement of layoffs, the demonstration is a reflection of much larger frustrations of students and university employees to the attacks on higher education at Oberlin College and universities across the US.

Over the past two years the Oberlin administration have attempted to eliminate a budget deficit through changes to health care and retirement benefits, as well as the size of the administrative staff. The university also approved a financial report, entitled the One Oberlin, last year that specifies the school plans on eliminating the “equivalent of 25 full-time faculty positions” by the 2024 fiscal year. The school is also working to cut $17.3 million by 2025.

Oberlin is the most expensive college in Ohio for students and the 23rd most expensive in the country, according to a recent CBS News report. The university’s website reports that an undergraduate would be expected to pay $37,833 for a single semester, including tuition, fees and room-and-board.

While the administration frequently trots out as rationale that the university has to pay over $30 million as a result of losing a recent libel case, the vice president for finance and administration, Rebecca Vazquez-Skillings, has admitted that the college has been running deficit spending “for decades.” With the corporatization of higher education, however, these deficits have little impact on the president and top administrators. Marvin Krislov, the former president of Oberlin, had a salary of $577,000 in 2017 and Nancy S. Dye, another former president who left the school in 2007, was paid over $1.4 million between 2007 and 2008.

The demonstration against the outsourcing of dining and custodial workers is a reflection of the reemergence of struggles by workers and students. But no confidence can be placed in the UAW, which has spent decades colluding with the auto companies and other employers in the destruction of hundreds of thousands of jobs and the destruction of wages and benefits.

This has prompted University of California Santa Cruz (UCSC) grad students and teaching assistants (TA), who are also members of the UAW, to conduct an ongoing wildcat strike to demand a cost-of-living increase in defiance of the union and the Democratic Party controlled university administration.

At UCSC the UAW agreed to a contract that includes poverty level wages, which have left some lecturers homeless due to the impossibly high cost of housing, and a no-strike clause. Janet Napolitano—the current UC president and former Obama administration Secretary of Homeland Security—has already threatened to fire the grad students and TAs. The UCSC workers have appealed to university workers across the country and found support with solidarity demonstrations across the University of California system last Friday, as well as statements of support from workers at New York University and the University of Chicago, both private colleges.

As the corruption scandal in the UAW has proven, the organization is nothing more than a criminal syndicate whose executives have taken millions of dollars in company bribes and embezzled millions more from workers’ paychecks to fund their luxurious lives.

If there is to be a real struggle against these layoffs, workers will have to conduct it themselves. This requires building rank-and-file committees, independent of the UAW and other unions, to unite with workers and students across the state and beyond.