One of the most important aspects of Bernie Sanders’ appearance Sunday night on the CBS program “60 Minutes” was a section of the interview that the network chose not to broadcast, but which was nonetheless available on its website and widely cited in the media afterwards. 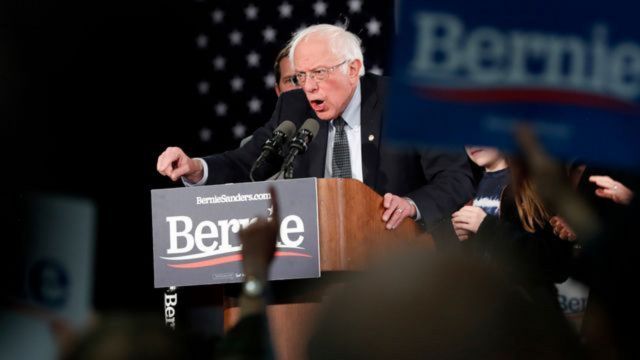 This was a discussion between Sanders and interviewer Anderson Cooper over the question of US war-making, in which the frontrunner for the Democratic presidential nomination gave his views on the circumstances in which he would order military action.

“We have the best military in the world,” was Sanders’ first response when Cooper raised the question of his past posture of opposing overseas American military interventions. Asked to spell out the circumstances in which he, as president, would send US forces into combat, Sanders replied: “Threats against the American people, to be sure. Threats against our allies. I believe in NATO. I believe that the United States, everything being equal, should be working with other countries in alliance, not doing it alone.”

When Cooper asked whether he would order military action if China attacked Taiwan—an island which the United States officially recognizes as Chinese territory—Sanders replied, “Yeah. I mean, I think we have got to make it clear to countries around the world that we will not sit by and allow invasions to take place, absolutely.”

Given that nearly all of the American wars of aggression of the past 30 years were waged under such pretexts, Sanders’ response should raise the alarm among working people and young people who have rallied to his campaign thinking that he was a genuine opponent of war.

The administration of George H. W. Bush launched the 1991 Persian Gulf war on the pretext of opposing Iraqi President Saddam Hussein’s invasion of Kuwait. The administration of Bill Clinton bombed Serbian targets in Bosnia and later bombed Serbia itself, citing acts of aggression by Serbian forces against Bosnian Muslims and Kosovars as a pretext.

The administration of George W. Bush invaded Afghanistan claiming this was a necessary response to the September 11 terrorist attacks against the United States. It employed the same pretext, on an even more threadbare and dishonest basis, to justify the 2003 invasion of Iraq, which had nothing to do with the 9/11 attacks.

The Obama administration waged war for all its eight years in office—in Afghanistan, Iraq, and through the use of drones and proxy forces in Syria, Yemen and many other countries. It should be recalled that during his first run for the presidency, when Sanders was asked whether he would use drones and special forces in the “war on terror,” he responded, “All that and more.”

As for “threats against our allies,” such a criterion could be used to justify US military intervention against Russia in the event of further border clashes with Ukraine or conflict between Moscow and the ferociously anti-Russian right-wing regimes in the Baltic states. Further clashes between Turkish and Syrian government forces could involve Russian forces, bringing them into a military conflict with Turkey, a NATO member.

In the event of naval conflicts between China and Japan or South Korea over disputed islets, or with any number of southeast Asian countries that contest Chinese claims to parts of the South China Sea, the US could go to war with yet another nuclear-armed rival on the basis of Sanders’ criteria.

Revealingly, in the “60 Minutes” interview Sanders did not make a single criticism of the Trump administration’s bellicose threats against Iran, Venezuela or other countries targeted for imperialist bullying by Washington. He criticized Trump’s friendly overtures towards North Korea, although he said he would not rule out meeting with the country’s dictator Kim Jong-un.

These comments follow a response by the Sanders campaign to a New York Times survey of the Democratic candidates, in which Sanders said he would consider preemptive use of military force against an Iranian or North Korean nuclear or missile test.

Sanders sought to combine his generally “mainstream” approach to imperialist foreign policy with a bit of left posturing in relation to Cuba. He told Cooper, in response to a question about his past sympathy for the Sandinista regime in Nicaragua, and opposition to US sanctions against Cuba: “We’re very opposed to the authoritarian nature of Cuba, but you know, it’s unfair to simply say everything is bad. You know? When Fidel Castro came into office, you know what he did? He had a massive literacy program. Is that a bad thing? Even though Fidel Castro did it?”

Anticipating the red-baiting response of the Republicans and Cuban exile groups in south Florida, Sanders staged his own pre-emptive red-baiting against Trump, suggesting that the president had no right to criticize him as soft on Castro given his own “love letters” to Kim Jong-un.

There is another incident that raises questions about Sanders’ claims to be a candidate opposed to the “endless wars” of American imperialism. When asked by reporters about the Washington Post ’s report Friday that he had been notified by US intelligence agencies about supposed Russian efforts to interfere in the US elections in his support, he said he had received a briefing “about a month ago.”

When asked why he had not disclosed the briefing or its subject, Sanders answered, “Because I go to many intelligence briefings which I don’t reveal to the public.”