Foodbank use soars across Canada, as 8 million apply for government aid

Foodbanks across Canada are seeing a major spike in demand as the devastating effects of the COVID-19 pandemic plunge increasing numbers of working people into destitution and acute need. According to Food Banks Canada, demand has jumped 20 percent on average over the last few weeks and is expected to “keep going up and up and up.”

The latest indication of the rapidly accelerating social crisis was provided by news this week that more than 8 million Canadians, or almost 40 percent of the country’s labour force, have now applied for the federal government’s makeshift and utterly inadequate Canada Emergency Response Benefit (CERB). The CERB effectively places workers who have lost their income due to the pandemic and its economic fallout on rations. Recipients are to receive C$2,000, C$1,800 of which is taxable, per month for a maximum of four months. This miserly sum is barely enough to cover rent for a one-room apartment in Toronto, Vancouver, and many other of Canada’s large cities, never mind food and other basic necessities.

In Canada’s most populous province, Ontario, the Daily Bread Food Bank, which supplies nearly 200 food programs in Toronto, has seen requests for help skyrocket over the past month. The number of families seeking food each day has risen from 120 to more than 300—an increase that Chief Executive Neil Hetherington said is “completely unheard of.” The Stop foodbank, which has three Toronto locations, has seen a 30 percent increase in clients, many of whom are accessing emergency food services for the first time. The Davis Centre foodbank, which usually feeds 600 people at five locations, is now struggling to feed nearly twice as many. 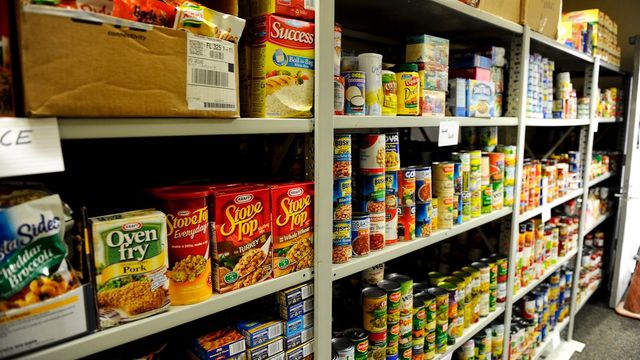 In Quebec, the Moisson network, which normally serves half a million people per month, has seen demand rise by 50 percent province-wide, including a doubling of demand in rural areas.

Similar circumstances can be found elsewhere in Canada, as the economic toll from a health emergency for which Canada’s pro-big business governments failed to prepare, takes full effect. “It really doesn’t take long when people are living paycheque to paycheque to need food,” says Chantal Senecal, who manages 60 foodbanks across New Brunswick, the province that has the highest per capita rate of foodbank use anywhere in the country.

In the prairie province of Saskatchewan, where half of all businesses are now shut down, foodbanks in the capital Regina and Melfort, a town northeast of Saskatoon, are reporting a surge in demand of 40 to 50 percent. Executive Director Kim Scruby of the Prince Albert Food Bank is preparing for a 50 percent increase in the coming weeks. “We’re expecting to get a lot busier once the full impact of all of the layoffs kicks in,” she said.

The challenge of meeting the sudden boost in demand is being exacerbated by the increased scarcity of volunteers and resources. According to Food Bank Canada, some charities are experiencing a 50 percent drop in donations with only a few weeks of food supplies left. The shortages have also given way to service reductions and closures across the country. In Toronto, almost half of the city’s foodbanks have already shuttered their doors.

The sharp uptick in demand for foodbank services across the country has been triggered by the mass layoffs following the business closures and economic slowdown associated with the COVID-19 pandemic. More fundamentally, however, the eruption of intense food insecurity during the COVID-19 pandemic, epitomized by the recent miles-long lineups of cars at foodbanks in cities across the US, has exposed the precarious existence of wide swathes of the population, who are living on the edge at the best of times under crisis-ridden capitalism.

Over the last year, according to PROOF, a university-based team of researchers, about one in eight households across Canada experienced food insecurity—amounting to 4.4 million people—the largest number ever recorded. Canada’s deeply impoverished Northern communities are particularly vulnerable, with 57 percent of households in the territory of Nunavut considered food-insecure.

Last May, business website Bloomberg reported that almost 48 percent of Canadians were C$200 or less away from financial insolvency every month. A recent Ipsos Reid survey reported that three in ten Canadians would not be able to pay their bills if they lost their jobs due to COVID-19.

According to Hunger Count, 60 percent of food-insecure households rely on wages and salaries as their main source of income, indicating that those working low-wage jobs can’t earn enough to meet their families’ basic nutrition needs. “Not enough hours, not enough benefits, only one salary carrying a whole family, and that salary just doesn’t pay enough,” explained Nick Saul, CEO of Community Food Centres Canada. “So when you have something like COVID, hit in the midst of that stress and uncertainty and anxiety, those ranks are only going to grow.”

The economic seizure is creating disruptions in the global food supply and further exacerbating the social crisis of food insecurity. Food scarcity and inflation are to be expected. Newfoundland and Labrador Premier Dwight Ball warns that the island has just a five-day supply of food if strapped shipping giant Oceanex—which delivers 50 percent of all freight to Newfoundland and is a major supplier of Costco and Walmart—ceases its operations.

Some of Canada’s major corporations are using the COVID-19 crisis to masquerade as do-gooders, with media giant Rogers announcing it would donate 1 million meals to Food Bank Canada and Shaw Communications C$1 million to Community Food Centres Canada. These are the same corporations that have made their fortunes through wage-cutting and price gouging. The Canadian arm of Nestlé, which has also pledged over C$2 million in food donations to Food Banks Canada, is demanding a speed-up in production from its workers in return for a few extra dollars an hour, despite the outbreak of COVID-19 infections and deaths that have already blazed through factories and warehouses throughout North America.

Two weeks ago, the big business Liberal party led by Prime Minister Justin Trudeau promised to address the “urgent food needs” of Canadians by providing a miserable C$100 million to be distributed to food organizations throughout the country. This is a trivial amount—all the more so when compared to the C$650 billion his government funnelled into the banks and big business, to bail out investors, literally overnight.

In early April, Trudeau discussed with the provinces the possibility of invoking the draconian, anti-democratic Emergencies Act, so as to give Ottawa the power to conscript labour to work under dangerous conditions under the pretext of providing “essential” services. According to media reports, the government was concerned about rising absenteeism, as workers forced to work in unsafe conditions and fearful for their safety and that of their families call in sick.

Even as infections continue to spread across the country at a rapid clip, the Trudeau government is in talks with agribusiness and the unions on how to keep food production going, despite the dangerous “elbow to elbow” working conditions, exposed most recently at the Cargill meatpacking plant near Calgary, Alberta. More than 550 workers at the Cargill facility near High River, Alberta, have fallen sick, and one worker, an immigrant from Vietnam, has died.

The deep-seated socio-economic hardships brought to the fore by the COVID-19 pandemic are the product of the decades-long assault big business and its hirelings in all the establishment parties, from the avowedly pro-big business Conservatives to the ostensibly “left” NDP, have mounted. Public services, like health care, and social protections, like minimum wages and unemployment insurance, have been shredded and workers’ living standards gutted in endless rounds of government austerity and employer drives for increased “competitiveness”—i.e., investor profit.

After decades of austerity, Ontario struggles to cope with surge in COVID-19 cases
[20 April 2020]