What Do We Need to Talk About?: Richard Nelson’s “Zoom theater” in the midst of the pandemic

The coronavirus pandemic poses insuperable problems for live theater, at least for now. Even a one-man or one-woman show requires a live audience, and the loosest interpretation of social distancing makes that impossible. New York City’s Public Theater, however, aired an original substitute for live performance on its website last week.

A new play by Richard Nelson, What Do We Need to Talk About?, was presented in the form of what might be termed “Zoom theater.” The technology was used to bring together five characters in four different locations, in a drama set in the small town of Rhinebeck, New York, about 100 miles north of New York City. The five carry on their conversation via video chat. The technique is not the same as live theater, obviously, but it has potential as a form of dramatic intercourse. The play was available on the Public Theater website for five days, beginning April 29. Other theaters are beginning to experiment along similar lines.

Nelson is a prolific playwright, long associated with the Public Theater, and in recent years with an approach that presents fictional characters in a naturalistic setting, in “real time.” His latest play features the same four siblings of the Apple family that were brought to life in the so-called Apple plays of 2010–2013. 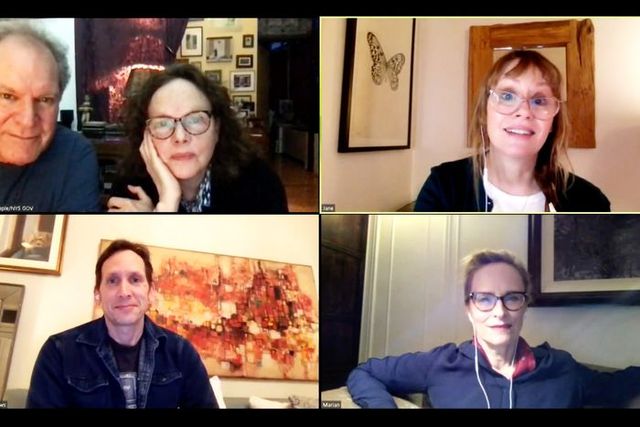 What Do We Need to Talk About? (Courtesy of the Public Theater)

Richard (Jay O. Sanders) is a lawyer who some years ago left a corporate job in New York City to work for the New York state government in Albany. He has three sisters: Barbara (Maryann Plunkett) is a high school teacher in Rhinebeck, Marian (Laila Robins) a grade-school teacher in the same town and Jane (Sally Murphy) a non-fiction writer, who had been living in New York City, but has since moved back to her hometown. Present as well is Tim (Stephen Kunken), Jane’s actor boyfriend, who is also running a restaurant in Rhinebeck.

The four earlier Apple plays were distinguished by the unusual fact that each premiered on the very day on which it was set: US Election Day in 2010, the ten-year anniversary of the September terrorist attacks in 2011, the presidential election of 2012 and the 50th anniversary of the assassination of John F. Kennedy in 2013. In our review of the second of these efforts, Sweet and Sad, we noted Nelson’s ability to move between the personal and political aspects of his characters’ lives in a way that did not seem forced or didactic, and yet had something to say about humanity and history. The dates chosen for these plays illustrated this effort to make sense of the present and its roots in the past.

The latest play finds the siblings in lockdown mode, a decade older than when we first met them. Richard has moved back to Rhinebeck while he works from home. Barbara’s story is the most gripping—she has recently returned from a hospital stay, where she was treated for a severe case of COVID-19 infection.

While only briefly addressed, this provides the somber background for the family conversation. Tim brings up the recent death of Mark Blum, the film and television actor he knew, from complications of COVID-19. At another point, Barbara remarks on the fact they are lucky to be able to quarantine, obliquely referring to the many millions who have no choice but to work, or who live in crowded and unsafe quarters.

The characters describe what they are working on, or their future plans. Richard, 67 years old, shocks his sisters when he announces he is thinking of retirement. His children are finishing school and have no student debt. Increasingly bored with his job in the bureaucracy, he speaks of writing history. At one point he brings up the somewhat unlikely subject of President Franklin Pierce, the fierce opponent of abolitionism who as US president during the 1850s signed the notorious Kansas-Nebraska Act and enforced the Fugitive Slave Act, helping to pave the way for the Civil War. 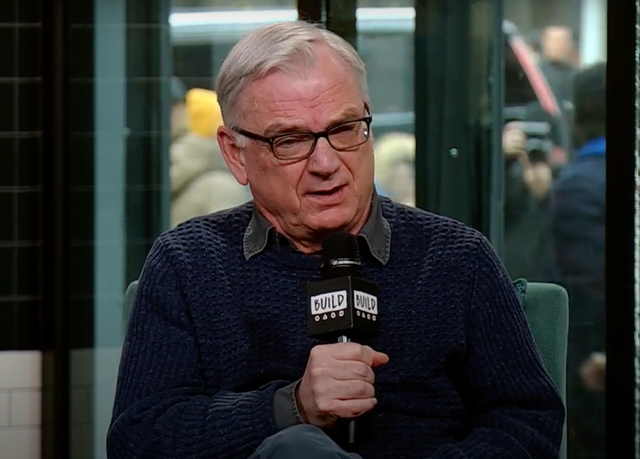 Barbara is still recovering her strength. She has assigned The Decameron, the 14th century classic by Giovanni Boccaccio, structured as a group of tales told by 10 women and men sheltering to escape the Black Death in a villa in northern Italy, as reading for her students.

Jane is at work on an essay dealing with Gladys Huntington, the little-known American author who committed suicide in 1959, three years after the anonymous publication of her novel Madame Solario. And Tim speaks about the problems of theater during the pandemic: he is discussing with others presenting plays online, possibly including Russian playwright Anton Chekhov’s The Cherry Orchard (1904).

Toward the close of the conversation, Barbara plays a poignant recording of their uncle Benjamin Apple, a retired actor, reciting Walt Whitman’s moving “The Wound Dresser,” based on the poet’s work in comforting gravely or mortally wounded soldiers during the US Civil War. Benjamin, who has since died, was a presence in the earlier Apple plays. Sweet and Sad, the strongest of these works, closes with Benjamin rehearsing, in 2011, for a public recital of this poem later that same day.

This is followed by an indirect allusion to current concerns, as Barbara uses her new smartphone, which she has finally substituted for her old cell phone, to play the Dona nobis pacem (Give us peace) from Bach’s Mass in B Minor.

As indicated, there are a number of affecting moments in What Do We Need to Talk About? The performances are very strong, especially those of Sanders and Plunkett, as the two older siblings. Nelson has a natural and appealing way with dialogue.

The playwright has been compared to Chekhov in his style and subject matter. It is no accident that The Cherry Orchard receives a mention in this work. There is something appropriate in Tim’s description of the Chekhov play, which spoke of “the need to heal, the need to go on” and which was written when the dramatist knew he was dying of tuberculosis. The theme of perseverance is a serious one, and the viewer is left with a respect for the sincerity and generally humane instincts of the characters.

It must be kept in mind, however, that Chekhov’s themes, including a certain resignation and disappointment, coupled with his honesty and respect for the audience member or reader, have had greater resonance and value at some historical moments than at others since they were first articulated. The social issues today are not what they were when The Cherry Orchard was written.

In this context, one’s overall response to What Do We Need to Talk About? is disappointment at the missed opportunities. The greatest social, political and economic crisis facing everyone now alive is something that very much “needs to be talked about” and at length. And yet the issues raised by the pandemic, among them the ruling elite’s unpreparedness and criminal neglect of the health of the population, are simply ignored. This is especially glaring when one considers that ten years ago Nelson had much more to say.

What lies behind the shift or stagnation in outlook? Of course, an initial turn inward may be an understandable reaction to the shock of the COVID-19 pandemic. Millions have been jolted by the events of the past few months, and struggle to find their bearings—even if, unlike Barbara Apple, they have not fallen ill.

There is another important issue, and that is the impact of the ongoing economic and political crisis, a crisis that long preceded the pandemic. Deepening inequality and the growing danger of war and dictatorship have exposed the political dead end of capitalist politics, but two consecutive attempts to revive Democratic Party liberalism have ended with a whimper, demonstrating the impossibility of capitalist reform.

The Trump presidency, meanwhile, coupled with the rise of fascistic trends internationally, has shocked and intimidated a broad layer of the liberal middle class. Some are running for cover—in the US this means back to the Democrats yet again. In Sweet and Sad, Richard spoke scornfully of the Wall Street Democrats and the Wall Street Republicans. In his latest play, however, everyone sings the praises of New York Governor Andrew Cuomo, a Democrat, for his supposedly brilliant leadership during the pandemic! Richard can only add, in the closing moments of the play, “Let’s not go overboard” about Cuomo, as though to prepare his sisters for the inevitable disappointments ahead.

The Apples express in part the outlook of a social layer that does not know what has just hit it, or what is on the horizon. At the same time, there are some signs they are not quite ready to abandon all hope. In the struggles to come, it will be both possible and necessary to win a section of this layer to the side and behind the leadership of the working class.