A mental health crisis has unfolded among health care workers who are on the front lines fighting the coronavirus pandemic in hospitals and care facilities. Since the pandemic first began ravaging the United States and much of the world in late March, countless testimonials and reports have emerged documenting the psychological harm being inflicted on nurses, doctors and health care workers as a result of the COVID-19 virus spreading unabated and taking hundreds of thousands of lives globally. This has led some health care staff to even take their own lives and many others threatened with being pushed to the brink.

Over the past two weeks, an emergency medical technician and an ER doctor working in New York City, the hardest-hit region in the US, committed suicide after an avalanche of COVID-19 patients began flooding New York City’s hospitals and emergency rooms. Psychiatric experts are warning that these tragic deaths could very well be a harbinger for an intensifying mental health crisis in the US, especially as federal officials and state governments move to reopen the economy and risk the lives of millions with a still rising infection rate. 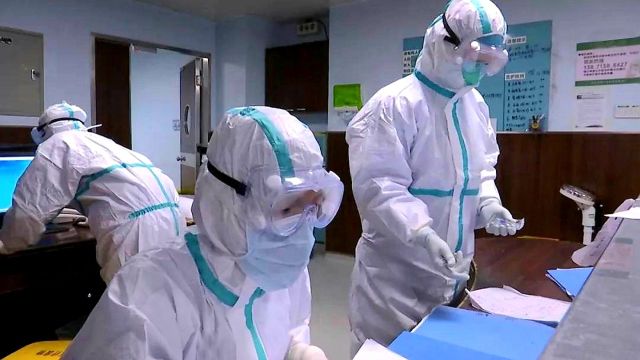 Mount Sinai hospitals in New York City have treated more than 2,000 coronavirus patients and hundreds of hospital staff have been infected. At least 20 have died from the virus. Due to the staggering loss of life, hospitals across the country have been forced to take initiatives to protect health care workers from falling prey to serious mental breakdowns after weeks of battling the pandemic, with many in the mental health field projecting an uptick in depression and post-traumatic stress disorders (PTSD) from the fatality fallout.

Mount Sinai, for instance, was forced at the beginning of April, when the number of dead saw an unrelenting rise, to adopt a 24/7 mental health crisis line and one-on-one counseling. Jonathan Ripp, Mount Sinai’s wellness chief, pointed to the speed at which the fatalities were happening as a central reason for addressing long-term trauma. He told USA Today that the number dying was becoming “higher than deaths we saw during the Vietnam War,” which was a major “cause for concern.”

According to health experts, as many as 20 to 25 percent of health care workers in severe coronavirus hotspots are expected to develop psychological disorders such as anxiety, depression or PTSD. This rate is similar to soldiers returning home after military tours.

A great contributor to the mental health problems workers are facing is the extreme lack of protection and safety for hospital staff. One nurse working in a hospital in Manhattan described the arduous obstacles health care staff confront when getting tested for coronavirus. In an article in BuzzFeed news the nurse said of workers contracting COVID-19, “We are expected to work for as long as we are asymptomatic” but “cannot get tested unless we’re symptomatic.” This amounts to a deadly catch-22, as hospital management has decided not to commit widespread testing to lower awareness of potentially sick workers.

Another nurse said that hospitals have rationing personal protective equipment (PPE) to an absurd level, heightening feelings of anxiety and fear over contracting the virus. He said that hospitals were only giving “one disposable mask and one disposable gown” for five total 12-hour shifts before they could be replaced. The nurse mentioned that a little more than a month ago, the nursing staff was instructed to not wear masks at all at work, but this policy was later revised because too many nurses started testing positive.

This mental health care crisis, in fact, is an international phenomenon that has stretched to health care workers across the globe. The coronavirus has infected more than 3.9 million people while the death total stands at over 274,000 worldwide. In country after country, hospital staff reports are revealing severe signs of psychological distress. A study released last month investigating the mental health consequences among Chinese physicians and nurses who confronted the pandemic in Wuhan from January 29 to February 3 gave a glimpse into the toll being exerted on workers’ well-being.

It showed that half of the 1,257 participants were showing symptoms of depression and 44 percent carried symptoms of anxiety. An additional 71 percent reported having feelings of distress. One of the main causes of such feelings of fear and suffering during the pandemic is the fact that nurses and doctors, while being somewhat acclimated to deaths from regularly working with sick individuals, are not accustomed to putting themselves at constant risk while treating others.

Debbie Minsky-Kelly, a social work professor at Carthage College in Wisconsin, told USA Today that doctors and nurses are usually faced with “second-hand traumas” because of injuries or fatalities that only threaten the lives of patients. Treating the coronavirus, however, has evoked widespread “first-hand” traumatic experiences due to the heightened risk of contracting COVID-19 in crowded and unsafe health environments. This danger is reinforced in many cases by the severe absence of necessary PPE to aid health care staff in treating sick coronavirus patients.

Over the course of April, the virus has infected more than 9,000 health care workers in the US and led to 27, according to the Centers for Disease Control and Prevention. Hundreds of clinicians have likewise died worldwide from the virus. One of the top concerns for health care workers is spreading the disease to their patients and loved ones. Young medical residents in some facilities have even been encouraged to write living wills.

Another harrowing aspect of working under such conditions has been watching victims frequently being forced to suffer and reach their demise alone, isolated from friends and relatives due to the danger of rising infections.

Adding to the deplorable nature of the capitalist for-profit health system, hospitals have muzzled their staffers in raising concerns of equipment, citing dubious claims over the spread of misinformation and patient privacy. All around the world clinicians who have spoken out about the resource shortages or shared their experiences have been reprimanded or fired by their institutions. Many mental health experts predict that, taken together, these traumatic effects of the pandemic and the failure of the public health system to take proper precautions for their lives will resonate long after the crisis has abated.

It is not only health care workers on the job who bear a great risk of suffering psychologically. The thousands of health care workers who have been furloughed or taken pay cuts throughout pandemic, corresponding with the general rise in unemployment and desperation felt by millions, are affected. Despite being one of the states with the largest number of infections, California has been forced to implement sweeping layoffs in health care. A recent survey of more than 3,200 physicians conducted by the California Medical Association found that 49 percent of practices had to lay off or furlough staff.

The medical infrastructure in the state has been so unprepared and underfunded to handle the influx of new patients that many facilities and practices have planned to ask the state government a total of $1 billion in funds before June 30 to avoid further pay cuts and layoffs. Last month, some 150 registered nurses in San Jose and San Diego were laid off due to department closures and the cancellation of elective procedures.

Scores of health systems are reporting revenue declines of 40 to 50 percent, spurring a further acceleration of pay cuts. In one survey of more than 300 physicians and nurses conducted by Bain & Co. between April 8 and 13, out of all the clinicians who are expecting a decrease in compensation, half expect their pay to decrease by more than 25 percent. Sixty percent of these are front-line hospitalists and emergency, intensive care and infectious disease providers and 40 percent are primary care doctors and other specialists.

US nursing home catastrophe: Increasing numbers of the elderly fall victim to COVID-19
[6 May 2020]