Labelled “Australia beyond the coronavirus,” the speech was given to a gathering of Labor parliamentarians on Monday, before a brief three-day recall of federal parliament.

Significantly, it came as workers across Australia, including school teachers and retail and hospitality industry workers, are being ordered back into workplaces despite the federal government declaring that further COVID-19 outbreaks will inevitably result. 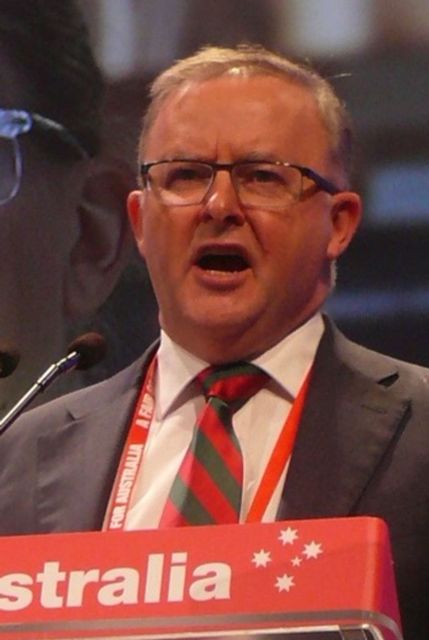 To assist this concerted drive by big business and its political servants, both Labor Party and Liberal-National, Albanese tried to revive the party’s “fair go” slogan that millions of workers simply did not believe during last May’s federal election.

Albanese had delivered four previous “vision” speeches in which he vowed that Labor would be “first and foremost” in “the business of creating wealth,” including by restructuring the industrial relations system to enhance the “gig economy” of casual and contract workers.

Now, however, the COVID-19 pandemic offered “a once-in-a-generation chance to reshape our economy so it works for people and deepens the meaning of the fair go.” Given the terrible global impact of the pandemic on working class lives and livelihoods, this slogan is even more fraudulent than it was a year ago.

Albanese studiously avoided any mention of the “return to work” offensive—which Labor and the trade unions are helping spearhead. But his remarks betrayed nervousness that the forced march back on the job could trigger resistance and unrest that Liberal-National Coalition government cannot control.

Confronted by mass unemployment, millions of workers are being coerced into returning to workplaces under transformed conditions, including outright cuts to pay and basic rights, that have been agreed by the unions in industry-wide deals struck with employer groups, all behind the backs of workers.

Moreover, the burden of the worldwide economic breakdown triggered by the pandemic, and the multi-billion dollar government rescue packages for business, is to be imposed on the working class via the further slashing of social spending as well as the slashing of wages, jobs and conditions.

On the morning of Albanese’s speech, Deloitte Access Economics, a corporate consultancy firm, released a “budget monitor” estimating that the federal budget deficit could be $143 billion this financial year and $132 billion in the next. These sums dwarf the deficits left by the previous Labor government’s pro-business bailouts during the 2008–09 global financial meltdown.

In that context, Albanese declared that everyone was “all in this together,” as if workers facing the elimination of jobs and living standards are in the same boat as the billionaires who are ruthlessly exploiting the crisis. That pitch was combined with another appeal, as in his previous “vision statements,” for a renewal of the spirit of the “Hawke/Keating reforms” of the 1980s and 1990s.

Between 1983 and 1996, these Labor governments, working hand-in-glove with both big business and the unions, responded to the globalisation of production by spearheading an assault on jobs and working conditions, and imposing a vast redistribution of wealth from the working class to the financial elite that has intensified in subsequent decades.

Albanese warned against the Morrison government’s talk of a post-COVID “snapback,” saying it would signal a return to job insecurity and poverty. He said people wanted a recovery “in which no one is left behind” and would not accept a return to “the law of the jungle and unfettered market forces.”

Yet, the unfettering of these “market forces” was precisely the content of the “Hawke/Keating reforms.” The only concern of the Labor and union leaders now is that this decades-long assault has produced explosive discontent among workers and that this unrest will intensify as the impact of the pandemic worsens.

The Labor leader complained of an “astonishing,” that is, dangerously provocative, statement by Industrial Relations Minister Christian Porter that casual workers did not need support during the crisis because of the pay loadings they receive to cover sick pay and annual leave.

“From ‘let them eat cake,’ to ‘let them use their loading,’” Albanese declared, invoking the spectre of the 1789 French revolution that overthrew the ancien régime headed by King Louis XVI and Queen Marie-Antoinette.

“Let’s not snap back to insecure work, to jobseekers stuck in poverty, to scientists being ignored,” Albanese implored. But his main criticism of the government’s $130 billion JobKeeper wage subsidy scheme was that some casual workers would receive $750-a-week payments from their employer even if they had been paid less before the scheme began.

“We have continued to raise concerns about the structure of the JobKeeper scheme, including the decision that some people would receive many times more than their ordinary earnings,” Albanese said. “Better design could have reduced the economic burden now and the debt burden into the future.”

Likewise, while promising a “fair go,” the Labor leader made clear his party’s readiness to again help impose austerity measures on the working class, as it did following the 2008–09 crash. “A constrained fiscal position does mean difficult choices,” he said.

Albanese pledged to continue offering bipartisan support to the Morrison government, having helped push all its COVID-19 business bailout measures through parliament. “Here in parliament, Labor has not and will not be obstructionist,” he said.

Throughout the crisis, Labor has propped up the government. It has formed a de facto coalition, joining weekly ministerial-level meetings behind closed doors. Labor also holds a majority among the state and territory government leaders, who have forged a “national cabinet” with Morrison, ruling the country via public health emergency decrees. Albanese welcomed this new “norm.”

At the same time, aware of rising class tensions, Albanese tried to distance Labor from the government’s most naked anti-working class utterances, such as that of Porter. He did not mention, of course, that Porter had named Australian Council of Trade Unions secretary Sally McManus as his “best friend forever” for the unions’ intimate collaboration with the government.

Above all, Albanese called for the entrenchment of this “critical” partnership. “It should not have taken a pandemic to recognise the important role of the trade union movement and that unions and business share common interests,” he said.

Another striking thread in the speech was its appeal for a more wartime-like economy based on “national resilience” and “capability to secure critical supply chains in the face of global shocks.”

In part, this theme echoes the protectionist calls of the unions for measures to subsidise local manufacturing companies, supposedly to create “Australian jobs.”

This must be a warning workers and young people. During both world wars—as well as the 1930s Great Depression—the Australian ruling class turned to Labor governments, supported by the unions, to enforce the sacrifices it required.

Just as Labor has supported the Morrison government’s pandemic measures, it has backed the government’s provocative stance against China, underscoring Labor’s commitment to the US military alliance and Washington’s confrontation with China.

In order to defend their lives, livelihoods and futures, workers and youth will have to wage a political struggle against the Labor and union apparatus, which is committed above all to the defence of the capitalist profit system.