More than a million children who Boris Johnson’s government wanted to force into classes yesterday were kept at home by worried parents, fearing an explosion in COVID-19 cases in schools that will spread throughout the population. 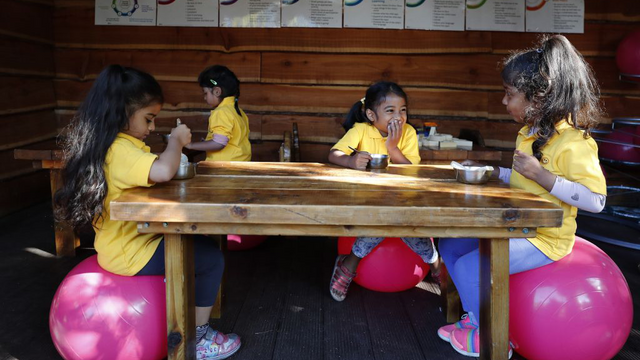 Children have breakfast at the Little Darling home-based Childcare after nurseries and primary schools partially reopen in England after the COVID-19 lockdown in London, Monday, June 1, 2020. (Photo: AP Photo/Frank Augstein)

More than 2 million pupils in nursery, reception, Year 1 and Year 6 were made eligible to return to school from Monday so their parents can be forced back to work. But the Association of School and College Leaders said that in the schools that were opened, only between 40 and 70 percent of pupils returned—possibly as few as 800,000.

Fears among parents and teachers of the impact of reopening schools were heightened by warnings over the weekend by four leading members of the government’s Scientific Advisory Group (SAGE) and from the Association of Directors of Public Health (ADPH).

Calum Semple, professor in Child Health and Outbreak Medicine, said, “I think a political decision has been made to tie in with when school was due to start, were everything normal, but it’s not normal … Essentially, we’re lifting the lid on a boiling pan and it’s just going to bubble over.”

John Edmunds, professor of infectious disease modelling at the London School of Hygiene and Tropical Medicine, warned, “There are still 8,000 new infections every day in England without counting those in hospitals and care homes … If you look at it internationally, it’s a very high level of incidence.”

Professor Peter Horby, chair of the Government’s New and Emerging Respiratory Virus Threats Advisory Group (NERVTAG), said that SAGE had been very clear that “test, trace, isolate must be fully running” before lockdown is relaxed.

The ADPH insisted that the government has not met its own five tests for easing the lockdown. Only the first, “The NHS’s ability to cope must be protected,” had been met and the failure to meet the other four put this in jeopardy. It said of the “sustained and consistent fall in daily death rates,” “the downward trend is slow—particularly in care settings” and “the effect of easing measures now will only become evident in two weeks.”

Of the “Rate of infection decreasing to manageable levels,” it stressed, “The rapid and multiple ways in which measures are being eased is likely to make it difficult to judge the cumulative impact on R [the reproduction rate]. As we saw in March, R can go above 1 in a very short space of time …” Regarding “Testing capacity and PPE supply being at adequate levels,” the ADPH was “not yet confident that the current testing regime is sufficiently effective …”

Of the final test, “No risk of a second peak that would overwhelm the NHS,” the ADPH made the powerful warning, “A second peak cannot be ruled out—whether it will overwhelm the NHS is an important question to ask. But perhaps the even bigger one is, do we really want the same number of deaths again? The scale to date represents an unimaginable tragedy and we must do everything possible to limit further loss of life.”

Underscoring the threat to public health of reopening schools, yesterday seven members of staff at the Arboretum Primary School in Derby tested positive for COVID-19, forcing it to close. A survey of 5,000 school leaders by the Tes (Times Educational Supplement) found that a fifth of school staff, including teachers and classroom assistants, would not be able to return to work this week for health reasons. Some teachers have health conditions such as asthma and diabetes, while others live with a vulnerable family member. Some are at a higher risk because of their age. This meant that only 75 percent of teachers are available for work, of which a fifth would be working from home.

Despite these clear dangers, the drive to reopen schools continues apace thanks to the role of the education unions and their Labour Party allies in demobilising opposition among teachers and parents.

About 20 local authorities had said that some of their schools would stay shut, but only for a few extra days. Cheshire West and Chester, East Riding of Yorkshire, Gateshead, North Somerset, Solihull, Tameside, Warrington, Wigan will begin opening their schools by June 8; Stockport and Trafford by June 10; Durham, Redbridge, Rochdale, Sefton, Sheffield and Cheshire East by June 15.

The same policy of standing by while a “phased” opening of schools takes place, before finally declaring an end to opposition, is being followed by all the education unions.

National Education Union (NEU) joint General Secretary Mary Bousted appeared on Sky News to urge Johnson to “step back from the brink” before declaring that children should return to school on June 15 when, she claimed, the infection rate “should be lower.”

Bousted signed a press release claiming that the warnings by the four government scientific advisers “changes everything.” But she knows very well that the Johnson government could not care less about such scientific advice. Her sole genuine concern is that the Tories continue to utilise her union’s services to organise the reopening of schools and prevent a fightback by teachers and parents. She appealed to Johnson directly during an online meeting of the People’s Assembly, “The only way the government can improve confidence in its policies is by letting us in.”

The same holds true of all the education unions, none of which has urged any form of action by teachers against reopening. Without facing collective opposition, the government felt able to reiterate Monday that it wanted “all primary school children [in England] to return to school before the summer” and to back the call from Anne Longfield, the children’s commissioner for England, for an “ambitious” programme of summer schooling to be organised. The government also rejected all calls for continuing the lockdown, adding that it was “unlikely” that relaxing the lockdown would push R above 1.

Opposition to the reopening of schools can and must be the spearhead of an independent movement of the working class against the Johnson government and its murderous back-to-work campaign. The Socialist Equality Party calls for the building of action committees, independent from the trade unions, to safeguard the health of children, teachers and the entire working class. We propose that teachers and parents take up the following demands:

The fight against the pandemic is inseparably linked to a struggle of workers against the ruling class and its dictatorship over economic and political life. It is a fight against capitalism and for socialism. We urge all educators who want to wage such a struggle to contact the SEP.

No to the reopening of schools! Build action committees to safeguard children and teachers!
[30 May 2020]