Homecoming, Season 2: The menacing “giant” that is the US military-industrial complex

The second season of Homecoming, the web television series, premiered on Amazon Prime Video on May 22. It is strongly recommended.

The first season, released in November 2018, concerns itself with a facility in Florida, the Homecoming Transitional Support Center, that supposedly helps Iraq and Afghanistan war veterans make a smoother transition to civilian life. The center is owned and operated by the Geist Group, a large corporation.

The viewer ultimately discovers that the “treatment program” involves dosing the veterans, all of them suffering from the terrible psychic effects of war, with memory-erasing drugs. If the drug were to work, the American military calculates it would be able to make repeated, trouble-free use of the soldiers in its murderous operations. However, things don’t work out that way. 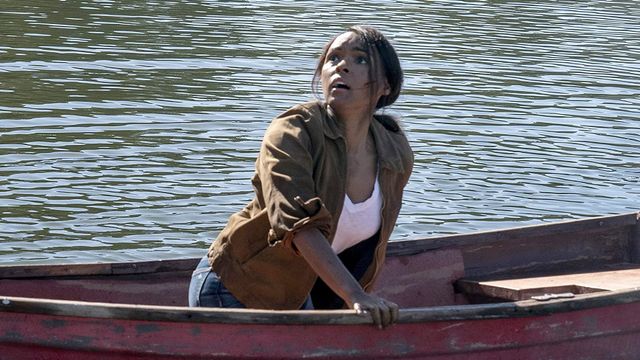 The first season focused on one of the young soldiers, Walter Cruz (Stephan James), and his Homecoming case worker, Heidi Bergman (Julia Roberts), both of whom, years after the fact, have no memory of what occurred at the “support center.”

When the truth begins to dawn on Heidi, she is outraged and appalled, and disgusted with herself. In what we described as some of the most meaningful lines Roberts has ever delivered, she bursts out at the corporate figure who has been lying to and manipulating her, “Everything you say, everything about you is fucking rotten. … And you have made me the same.” This seems directed at more than a single individual or even a single company.

A number of characters return in Homecoming ’s second, seven-part season, including Walter Cruz, still living in self-imposed seclusion in a mountain cabin.

The series, directed by Kyle Patrick Alvarez and scripted by a host of writers, is cleverly constructed. That is to say, genuinely clever, not simply self-conscious or designed to impress.

Episode 1 of the new season of Homecoming opens eerily on a woman (Janelle Monáe) alone in a rowboat, with no paddle, in the middle of a lake. She calls to a man on shore, who flees when she appeals to him. She has no idea what she’s doing there, or even who she is. A Veterans Affairs card in her pocket identifies her as “Jackie.” 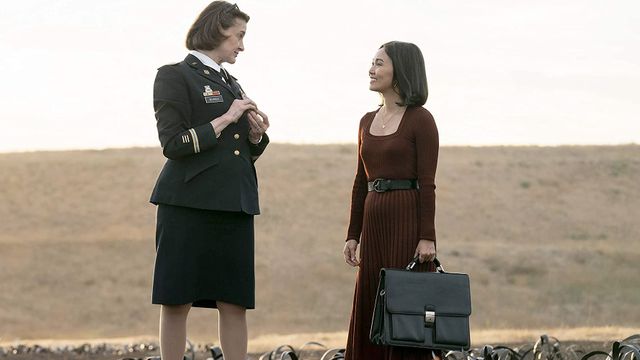 One way or another, still without her short-term memory, the distraught woman finds her way back to a motel room and a rental car. She goes to the address of the person who has rented the vehicle, “Alex Eastern,” and follows the woman, Audrey Temple (Hong Chau), who lives there to a high-tech facility, the headquarters of Geist Emergent Group, located in a remote rural area. When the two women eventually come face to face, Audrey addresses the other as “Alex,” apparently her real name, and asks about Walter Cruz.

The second season then retreats in time to make sense of its enigmatic opening. And, unusually for contemporary film or television efforts, the explanation is both dramatically satisfying and socially substantial.

We learn that Alex and Audrey, who has made her way to the top of the heap at Geist, are a couple living together. Alex works as a consultant, whose job it is—in an intriguing twist—to persuade or dupe individuals into dropping complaints (sexual harassment, etc.) against their employers and such. She is not a nice person. But then, neither is the somewhat less self-confident and aggressive Audrey.

In fact, although a few meager scraps are thrown in the direction of gender politics, season 2 of Homecoming specializes in rather sinister females, especially when it introduces Francine Bunda (the remarkable, underrated Joan Cusack), a monstrous Pentagon representative. The latter determines that the berries that produce the sought-after forgetfulness are a “critical military technology” and announces that the Department of Defense is now a “partner” with Geist, over the objections of company founder and owner, Leonard Geist (Chris Cooper). At one point, Geist notes sardonically that it hasn’t taken long for the women to become “as bad as the men.”

Meanwhile, Walter Cruz is having short bursts of memory. He grows determined to learn the nature of his treatment at Homecoming, which, when Audrey hears of his concerns, alarms her. Alex volunteers to visit Walter and do what she does best, cajole him into giving up his official information request. 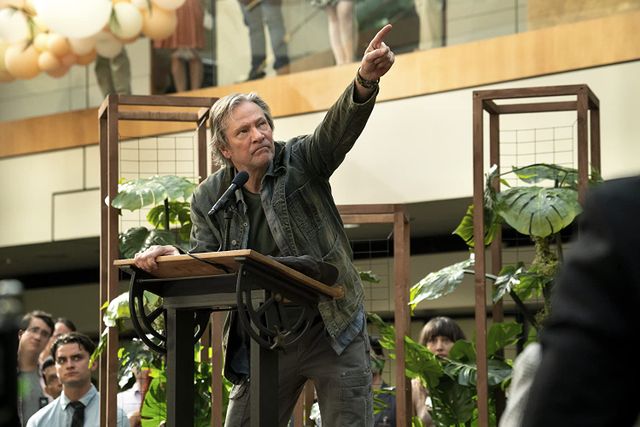 Bunda and Audrey plan a grand relaunching of Geist, inviting a host of corporate clients to a gala event. Bunda tells her “partner” to “let the crazy world in,” envisioning a host of profitable uses for the magical drug. Geist wants to put a stop to it all, but the Pentagon’s wicked amazon won’t let him. When Walter Cruz shows up at Geist’s door, the two put their heads together …

The second season, like the first, is hard-hitting. Of course, there are still terms that dare not be mentioned, such as capitalism, but it is, in fact, US capitalism in its decrepitude and criminality under scrutiny here, along with a few of its beneficiaries and a few of its victims.

Homecoming shows dramatically what most Americans already know or feel in their everyday lives and in their bones, and what the current coronavirus pandemic disaster confirms, that the powers that be would unhesitatingly sacrifice the lives of vast numbers to defend or increase their wealth. Lies, conspiracy, plunder and murder are all in a day’s work.

Monáe and Chau are fine, as is James, but the series truly comes to life through the performances of Cooper and especially, as noted above, Cusack.

Everyone by now agrees that the drug and the idea behind it have been a disaster, but Bunda-Cusack asks pointedly whether the soldier-victims themselves had any complaints. Told “No,” she simply shrugs. (Of course, the human guinea pigs have no idea what’s been done to them.) And when Leonard Geist attempts to “warn” his audience and his employees about the “giant” who has “shown up” and gestures angrily toward Bunda, she waves cheerfully in reply and Audrey cuts off his microphone. As to the field of berries, Bunda explains firmly, speaking for the Pentagon, “It’s ours.”

Her wild exuberance about the drug’s military and financial potential transports Homecoming to a higher, more disturbing level, bringing it more in line with the dangerous and objectively irrational nature of present-day social and economic organization. Bunda’s unfeeling behavior is as out of place, unimaginable and mad as … well, a vast stock market surge while tens of thousands lie dying. 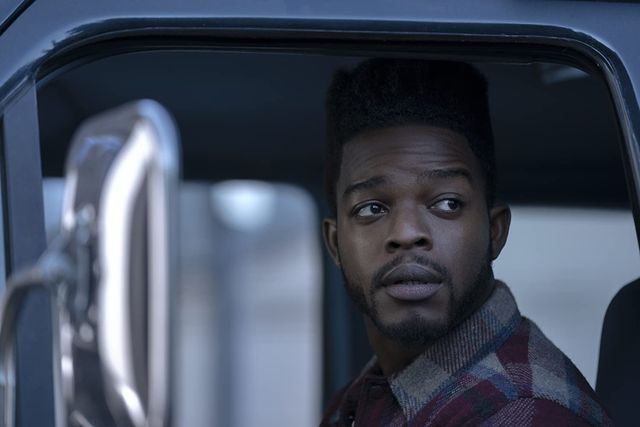 However, a process is under way in the “lower depths” too. Walter remains troubled. All his efforts to anaesthetize himself, to accommodate himself to his amnesia, fail. As awful as the reality may be, he feels compelled to remember his war experiences, his treatment. His elemental declaration, “I need to know what happened,” is terrifying in its implications for all those in authority.

The creators of the mini-series, whether they fully understand it or not, have touched on something large and important here. After each of the disasters the American ruling elite inflicts on the population at home and abroad, its representatives repeat, “We mustn’t point fingers,” “There’s no value in the blame game,” “Quick, let’s move on.”

The government and the military-intelligence apparatus advance the same blatant and even ludicrous falsehoods about Iran or Venezuela as they did in regard to Iraq or Libya because they rely on a media-induced amnesia in the population. In fact, all that is breaking down. Increasingly and with good reason, hardly anyone believes anything the people in power may say.

The urgency of “knowing what happened,” not only in the immediate sense, but in terms of the critical events of the 20th century, cannot be underestimated.

It is no accident that a reactionary philosopher like Friedrich Nietzsche, an enemy of socialism and apologist for exploitation, placed great value on the “benefit of active forgetfulness,” which functions, he wrote, “like a doorkeeper or guardian of mental order, rest and etiquette.” Forgetfulness, Nietzsche insisted, is “an active ability to suppress” without which “there could be no happiness.”

The oppressed, in fact, need to remember everything, every blow. Leon Trotsky suggested that “revolutionaries … enjoy good memories” and that their party “is the memory of the working class. Learning not to forget the past in order to foresee the future is our first, our most important task.”

To repeat, the second season of Homecoming is strongly recommended.