Yesterday, the California State Legislature voted on a state budget bill under conditions in which the state faces a projected budget deficit of $54.3 billion as a result of the economic fallout from the COVID-19 pandemic. K-12 public education is threatened with existential cuts, with California Governor Gavin Newsom proposing $8 billion in cuts for the coming year. Newsom has until July 1 to approve, alter or veto the austerity budget, though more changes to the state budget are likely to come in late summer as the real numbers from tax revenues arrive on July 15.

The legislature’s budget is a counter-proposal to Newsom’s revised budget issued in May, and argues that it can “spare” budget cuts to K-12 schools, primarily by issuing deferrals to districts. If enacted, nearly $10 billion in deferrals for school districts would be passed in order to cover projected expenses, forcing districts to assume vast sums of debt that will be owed back to the state in the near future. 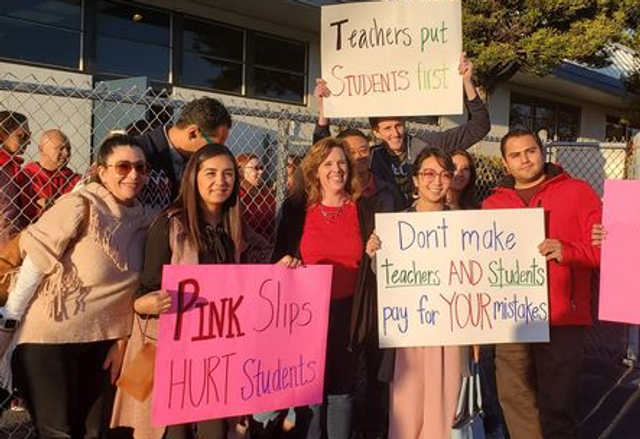 As the economic impact of the pandemic continues to deepen, it is evident that the current proposals from both the governor and the legislature vastly underestimate the cuts to education on the horizon. The legislature’s budget proposal is a stunt, one that hinges on the hope that the US Congress will come through with billions of dollars in funding for education through the fraudulent HEROES Act, which would provide some $10 billion in education relief to California.

In a joint statement, Senate President pro Tempore Toni G. Atkins (D-San Diego), Assembly Speaker Anthony Rendon (D-Lakewood) and chairs of the state budget committees said there was a “strong likelihood” that Congress would deliver additional federal relief. At a press conference Monday, Newsom said, “I remain confident that something will happen at the federal level to mitigate the impact at the state level.”

This is a cynical charade. Newsom and all the Democratic Party officials who have spearheaded decades of austerity in California know very well that the Senate has no intention of passing the HEROES Act, which Trump has explicitly declared “dead on arrival.”

While school districts across California face a future of growing austerity, dozens of the state’s K-12 public school districts facing prior budget shortfalls have already carried out budget cuts and issued layoffs to educators and support staff for the coming school year.

The COVID-19 pandemic will accelerate processes already underway, and result in a further gutting of budgets, drastically reduced services and thousands more layoffs for the 2020–21 school year. This is reflected in the 779,000 layoffs issued to K-12 public school district personnel throughout the US in the months of April and May, according to the Bureau of Labor Statistics (BLS). Precise figures detailing layoffs by state and district are not available, but given the large population of public school students and staff in California, it can be estimated that tens of thousands of California public school education workers lost their jobs in recent months.

According to the California School Boards Association, before the pandemic roughly 7 in 10 school districts in California already faced budget deficits, while 40 percent were already considering or issuing employee layoffs to help offset rising costs. Here is a snapshot of planned or already implemented budget cuts for the upcoming 2020–21 school year from 15 out of the state’s 977 districts:

• San Diego Unified School District, the second largest school district in the state, was already facing an $84 million deficit before the pandemic. At the end of April, the school board approved the layoffs of 458 classified positions, most of whom are teaching assistants in Child Development centers and special education departments.

• Los Angeles Unified School District, the state’s largest district, has incurred $200 million in coronavirus costs thus far adding to its prior budget deficit, which now amounts to a total $500 million.

• Burbank Unified School District in the Los Angeles metro area laid off 28 full-time teachers and over 25 additional classified staff in mid-March to cover a $3.2 million deficit.

• Selma Unified School District, located in Fresno County, is in the process of approving the elimination of at least 50 positions—including teachers, coaches, librarian assistants, bus drivers, counselors,and others—as well as a permanent 10 percent pay cut to all staff in order to cover a projected $12 million budget deficit.

• East Side Union High School District located in San Jose County approved the elimination of 125 full-time equivalent positions across the district in mid-March to close a $23 million deficit. Among those laid off include student and family advisers, counselors and custodians, among other classified positions.

• San Francisco Unified School District already faced a $22.6 million deficit, which has increased up to $40 million and is expected to build to $82.3 million as a result of the pandemic. There are proposals to cut at least 30 full-time, non-teaching positions, impose a hiring freeze on at least 15 open positions and cut at least $28 million from programs and services.

• In mid-March, Oakland Unified School District laid off 68 teachers and other certificated employees and 100 classified positions to close a $20.2 million budget deficit. More school closures and mergers are slated in the coming months.

• West Contra Costa Unified School District laid off 55 educators and over 100 classified workers in mid-March to cover some of their $47 million budget deficit. Educator layoffs were originally slated at 240, and in an effort to posture as a fighting organization the United Teachers of Richmond union pushed through an austerity agreement to increase class sizes for 1 year and eliminate teacher stipends, reducing teacher layoffs by 185.

• Vallejo City Unified School District in the East Bay is planning to cut at least $5.4 million from the 2020–2021 budget with a bulk of that amount coming from the elimination of 62 full-time equivalency (FTE) positions.

The above snapshot, which includes the elimination of well over 1,600 positions, represents a small portion of the cuts in the state which have been carried out prior to the full brunt of the economic impacts of the pandemic.

School districts must finalize their fiscal budgets for the upcoming academic year by June 30 to be counted in Newsom’s final budget. Further layoffs, furloughs, hiring freezes, school closures, and additional cuts to vital programs and services could be issued by districts as early as June or July.

The immense austerity facing educators comes after two years of nearly continuous strikes by teachers and other education workers in states across the US. In each instance, the teacher unions systematically isolated and shut down the strikes, to prevent them from coalescing into a nationwide strike, or even a statewide strike in the case of California.

In January 2019, after a six-day strike of 33,000 educators from the Los Angeles Unified School District, the United Teachers of Los Angeles union (UTLA) orchestrated a sellout deal, which failed to meet the teachers’ most critical demands to reduce class sizes, increase wages, stop the expansion of charter schools and address chronically underfunded budgets.

The seven-day strike in February 2019 by over 3,000 educators from Oakland Unified School District was ultimately suppressed by the Oakland Education Association (OEA) union. The OEA agreed to a deal that did not meet the demands of educators and opened the door for a continued attack on schools. Less than 24 hours after the contract’s ratification, $22 million in cuts were imposed by the district.

Last Fall, San Diego teachers in the Sweetwater Union High School District sought to break from the grip of the Sweetwater Education Association union (SEA) and organize independently in defense of their jobs. The SEA threatened educators with job loss if they did not remain “united” with the union, and ultimately $20 million in cuts were carried out.

With the growing financial devastation wrought by the pandemic, the struggles of educators in the US and internationally will only intensify in the coming months. To oppose the savage austerity of the ruling elites, as well as their growing calls for the unsafe reopening of schools in the fall, new organizations of struggle are needed. The World Socialist Web Site Educators Newsletter calls on all education workers to form rank-and-file committees, independent of the unions, to mobilize the working class to demand the funding and resources needed to guarantee the jobs, health and safety of all workers.

The massive, multi-racial protests that have swept the globe in response to the police murder of George Floyd indicate that the working class is increasingly radicalized and prepared to fight for social change. Educators must unite with this movement and incorporate demands for a vast redistribution of wealth to fund all the social rights of the working class, including the right to free, high quality public education. To get involved with this struggle, sign up for our newsletter, follow us on Facebook and contact us today.