A Human Rights Watch report published yesterday provides evidence that Burkina Faso troops are carrying out mass extrajudicial executions of civilians as part of operations in the French-led war in the Sahel.

The report is another exposure of the Franco-German-led war in Mali and the Sahel as a neo-colonial intervention whose aim is the subjugation of the resource-rich and geo-strategically critical region and its population. It follows a series of reports documenting similar atrocities by troops in Niger and Mali, which along with Burkina Faso, Chad and Mauritania make up the G5 force fighting alongside the European-led intervention. It also comes as the European powers are escalating their occupation, which is being cynically waged under the banner of combating “terrorism” and protecting human rights.

The report is based on interviews with 23 people from the northern town of Djibo, 45 kilometers from the border with Mali, including farmers, traders, civil servants and aid workers. All spoke anonymously for fear of government reprisals. In recent months, common graves have been uncovered in Djibo containing the bodies of at least 180 people, all men, killed in that town alone. All the witnesses said they believed the murders were committed by security forces, after the victims had been arrested. 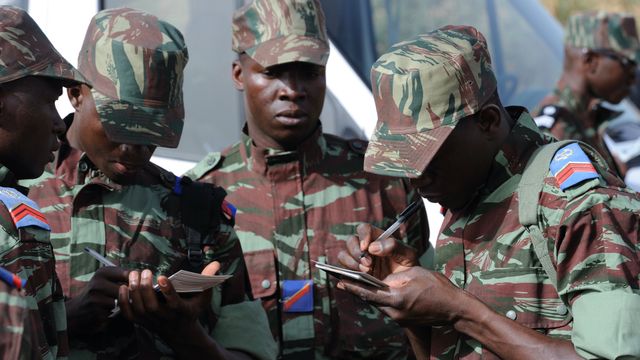 Soldiers from Burkina Faso before deployment to an exercise in Mali (Credit: Wikimedia Commons)

The executions reportedly spanned from November 2019 to June 2020. The victims’ bodies were left under roadways and bridges, fields and vacant lots. Most were found with their hands bound tightly behind their back and blindfolded, shot in the head. One farmer told HRW, “At night, so many times I’d hear the sound of vehicles and then, bam! bam! bam! And the next morning we’d see or hear of bodies found in this place or that.”

The residents reported that in most cases the bodies were left out in the open for days or weeks. Anyone accused of harboring sympathy for the Islamist ISIS forces fighting against the government could be killed. “People are just too terrified that if they claim the body of a man accused of being a terrorist, they too will be taken and end up dead,” one resident said.

The report includes specific details of mass executions. One man said: “I discovered the bodies of nine people some meters off the road, one of whom was my 23-year-old nephew. They’d been arrested the day before. A friend called around 11:00 a.m. saying there was trouble in the market, that my boy had been arrested. I went to the market immediately and saw all nine, tied up and face down on the ground. Four gendarmes led them into their vehicle and took them away. That night around 8:00 p.m. I heard shots near the Djibo dam, and in the morning saw them in the bush, hands tied, riddled with bullets… We were too afraid to even bury them … we had to watch my nephew turn into a skeleton. He was not laid to rest until the mass burial in March, with dozens of others, but it was hardly a funeral and my boy was not a jihadist.”

In March and April, the residents received permission to bury the bodies, and were “strictly forbidden” from taking photographs of the mass graves. “No one would dare do that because the FDS [Defense and Security Forces] was watching,” a resident said.

“I didn’t recognize any of them,” one resident said, “but several of those watching the burial later told me they’d recognized their father, brother, or son … that he’d been missing since being arrested by the soldiers in Djibo or in their village—weeks or months earlier. They didn’t say anything during the burial though … out of fear that they too would be arrested.”

Most of those killed by state forces belong to the ethnic Peuhl, or Fullani, community, which are predominately Muslim. Because of this, they are accused of being more sympathetic to recruiters for ISIS.

It is increasingly clear that the strategy of the European powers is based on the stoking of ethnic conflict between the Fulani and Dogons. The different ethnicities have long existed peacefully side by side in the same towns throughout the region. Since the launching of the war in Mali by France in August, 2014, however, a series of increasingly horrific ethnic massacres have taken place. Local security forces are widely reported to have armed and supported Dogon militia as part of the war against ISIS, and turned a blind eye to sectarian massacres.

In central Mali alone, HRW claims that it has documented the killing of 800 civilians in dozens of large-scale massacres of Peuhl citizens, and numerous killings of civilians by armed Peuhl groups and Islamists.

On February 14, 2020, a Dogon militia killed 35 villagers in the town of Ogossagou, the same location of a massacre of more than 150 people a year before, on March 23, 2019. It occurred within hours of a Malian security detail departing that had been stationed there since the previous year’s massacre.

The government has inexplicably claimed that the decision to stop protection of the village was a “tactical error.” According to a report in May by HRW, they withdrew without providing any explanation to the town’s inhabitants. Within hours villagers began to see a build-up of armed men in the Dogon neighborhood. They made calls to high-level Malian authorities, including government ministers, and to the UN peacekeeping mission, requesting protection.

“Among those they said they contacted were security force personnel—including gendarme and army personnel—based in Bankass, just 15 kilometers away,” the report stated. In addition, “a witness who had attended a meeting of high-level government and MINUSMA officials said … three ministers, including the defense and security ministers, had been contacted in the early evening of February 13 to raise the alarm about the likelihood of an attack.” The massacre was allowed to occur.

For European imperialism, such sectarian killings serve not only to terrorize the local population, but to provide a “human rights” rationale for maintaining a permanent occupation of the region. The Sahel contains not only contain uranium deposits that supply France for its energy production. The region is situated in a geographically important area of western Africa where European imperialism is seeking to hold back growing economic and diplomatic activity influence of China.

With criminal recklessness, French and German imperialism are following the strategy pursued by United States in its occupation of Iraq and Afghanistan, which destroyed entire societies and led to the deaths of over one million people and the forced emigration of tens of millions.

In a war-mongering July 6 column published in Le Monde, the German Social Democratic Party deputy Nils Schmid declared that “contrary to the anti-jihadist operations in Iraq and Afghanistan, led by the United States, France and Germany carry the principal responsibility for what is happening in the Sahel. We therefore cannot abdicate responsibility to the Americans or pull out our troops free of charge!”

Indeed, France and Germany are using the occupation of the Sahel as a testing ground for the methods developed by the United States in its decades-long “war on terror” in the Middle East. France is already operating armed drones from Niger for targeted assassinations. Germany is planning to deploy drones to the region. French President Emmanuel Macron travelled to Mauritania on June 30 to an international summit with the G5 leaders to announce a further intensification of the intervention and even closer collaboration with the G5.

The latest HRW report has received scant coverage in the French-language media and no comment from the French government. One can only imagine the wall-to-wall media editorials, government denunciations, and threats of sanctions that would follow if such documented atrocities were committed by militaries working with the armies of Iran, China or Russia.