The Scottish government led by Scottish National Party (SNP) leader and First Minister Nicola Sturgeon announced its intention to reopen all schools in Scotland on August 11.

The decision, announced by Sturgeon July 30, once again underscores the point that, presentational differences notwithstanding, SNP policy on the coronavirus pandemic is indistinguishable from that of Boris Johnson’s hated Conservative government in Westminster.

From August 11, primary and secondary schools will begin to reopen. All schools are expected to be fully operational by August 18. Only the most minimal measures will be taken to prevent coronavirus infection rapidly taking hold in schools, endangering the health and lives of large numbers of children, and placing their families, particularly elderly and vulnerable relatives, in danger. 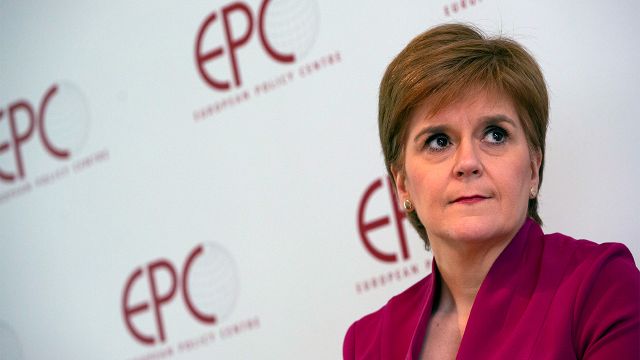 Government advice does not require physical distancing between children and young people of any age, although adults are expected to maintain two-metre distancing. Personal protective equipment (PPE) will not be required unless specified by a risk assessment. Pupils will not be required to wear face masks, nor will they be required to physically distance on school buses. “Enhanced hygiene” measures are required, meaning only more time for hand washing and sanitiser use. Windows and doors are to be left open.

Sturgeon sanctimoniously claimed she was acting on the “moral and educational imperative that we get children back to school as soon as is safely possible.” Her deputy, Education Secretary John Swinney, claimed he was responding to concerns from teachers.

“That’s why we’ve taken such care to gather the evidence, we established a specific expert group to look at all of these questions and to provide us with clinical advice” said Swinney.

A measure of the Scottish government’s “care to gather evidence” was the rebuke issued to Sturgeon by director of the UK’s Office for Statistical Regulation, Ed Humpherson. Writing to the Scottish government’s chief statistician, Roger Halliday, Humpherson noted Sturgeon’s July 3 claim repeated on several occasions that the “the prevalence of the virus in Scotland, right now, is five times lower than it is in England.”

Humpherson complained that “sources used to underpin this claim have been difficult to identify… it is important to recognise that a comparison of COVID-19 prevalence rates is not straightforward. If it is to be undertaken, the results and the uncertainties should be communicated transparently.”

Humpherson noted the comparison was based on groups of statistics that were not directly comparable and with unclear timeframes. He concluded, “We do not think that the sources above allow for a quantified and uncaveated comparison of the kind that was made.”

In other words, the Scottish government chose its statistics to justify the impression that its response to the pandemic was qualitatively better than in England.

Comparing similar statistics, however, the UK’s Office for National Statistics reported that Scotland suffered the third worse rate of excess deaths in Europe over the first half of 2020. Only Spain and England fared worse. Of the 25 major European cities with the highest rates of excess deaths, Edinburgh and Glasgow were both in the top 10, along with London, Birmingham, Amsterdam, and Madrid.

The ONS conceded that the fact that Scotland retained its lockdown a few weeks beyond May 10 meant that death rates continued to fall in Scotland. On the week beginning May 23, for example, Scotland had an age-standardised mortality rate 5.11 percent above average for the last 5 years. England’s rate was 7.55 percent, against Spain’s 6.65 percent. The downward trend has continued. In the week to July 26, COVID-19 accounted for less than 1 percent of all deaths in Scotland, compared with 36 percent at the pandemic peak.

But whatever gains may have been made by extending the lockdown in Scotland, they are rapidly being squandered in the rush to make up lost time. Many workplaces are already working normally, but fully returning the schools August 11 is the key to restoring the generation of profit. This will inevitably be accompanied by tragedies reminiscent of the pandemic’s early days.

New infection spikes have already emerged in advance of schools re-opening. Among the most concerning was that reported in Inverclyde, which includes the former industrial towns of Greenock and Port Glasgow. Inverclyde, which has some of the poorest areas in Scotland, has consistently recorded by far the highest infection and death rates.

A June report from NHS Greater Glasgow and Clyde suggested that the coronavirus was circulating extensively in the area long before the lockdown. Talking to Scottish Television of her experiences early during the pandemic, Dr Abby Gunn, a consultant to the Inverclyde Royal Hospital in Greenock, made the same point. She explained, “Every ward and every room that you went to had Covid-19 in the hospital. We saw this coming months in advance, yet we were still doing some of the real-time planning after we had the first positive case.”

Last week, NHS Greater Glasgow and Clyde confirmed a cluster of cases had again emerged in Inverclyde. Eleven new cases have been reported including a worker at Amazon’s 300,000-square-foot Faulds Park distribution centre outside Gourock, which employs 400. Although some workers were sent home, the entire facility remains operational.

An Amazon worker told the Greenock Telegraph, “The problem is that the person who tested roamed about putting items onto steel shelving, so workers feel the whole plant should have been closed down for a deep clean. Who knows where this person or others who are now isolating touched? People are concerned that management haven’t gone far enough to make sure the whole site is safe.”

Distribution played a role in other cases associated with the Inverclyde cluster. Deliveries by an infected driver to a Port Glasgow pharmacy appear to have resulted in several cases linked to the pharmacy.

Another spike associated with an outbreak at a privately contracted NHS contact tracing centre, run by Sitel near Motherwell, has now been linked to 27 COVID-19 cases. These include workers at the site and cases associated with reopened pubs and cafes across central Scotland.

Five people tested positive last week at the Fullarton Care Home in Irvine, where 22 elderly people died during the peak of the infection crisis. Run by HC-One, which operates 300 care home across the UK, the Irvine care home was criticised by the Care Inspectorate for poor hygiene and infection control, with staff untrained in the safe use of PPE.

Of a total of 4,201 COVID-19 deaths in Scotland, 46 percent, 1,932, have been in care homes. Many were caused by hasty releases of 1,300 untested elderly hospital patients, some of whom later showed COVID-19 symptoms. Most died in extremely difficult circumstances—isolated, frightened, written off by an over stressed hospital system, and left in care homes suffering extreme staff shortages because of the pandemic.

No confidence should be placed in the Scottish government, or its allies and apologists in the trade union bureaucracy and the pseudo-left groups, to do anything but defend the interests of capitalism. To combat the pandemic, and the attacks on living standards being pushed through, workers in Scotland, as in England and internationally, must mobilise independently through the formation of rank and file organisations in every workplace, school, and neighbourhood. They must take up the struggle for the socialist reorganisation of society.